Midnight in the Century – Victor Serge 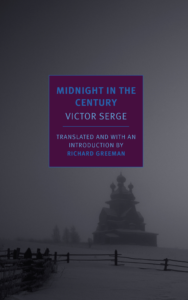 The life and work of Victor Serge embody the romanticized ideal of his era of revolutionaries: those who built Socialism in the first part of the 20th century and then continued to assert their ideology against its cooptation and corruption by Stalinism and other despotic systems. He lived all over the world, variously on the run from unfriendly regimes or organizing revolutionary militias, and spent, all told, over ten years in prison. Despite this pedigree, Serge’s work falls outside the Soviet literary cannon. Although he spent much of his life in Russia, he was born to Russian émigrés in Belgium and wrote in French.

But Serge’s novels may never have existed had they been written in Russian. Such expressly political and oppositional works would have been nearly impossible to circulate in the Soviet Union in the 1930s. As political-historical tomes, Serge’s work is connected to the tradition exemplified by the great bearded patriarch of 20th-century Russian literature Aleksandr Solzhenitsyn, but Solzhenitsyn didn’t publish anything until the 1960s, after Stalin’s death in the waning years of Khrushchev’s thaw (though he was nonetheless eventually expelled from the Soviet Union under Brezhnev, and spent his fair share of time in labor camps and exile before that). But Serge wrote works that were explicitly sympathetic with Trotsky and strains of Marxism unfriendly to Stalinism at a time when anyone who so much as shook the hand of someone expressing such ideological deviance could be arrested and might very well not make it to Siberia alive. Between the explosion of radical utopian-futurist creativity in the 1920s and the underground dissident literary works of the 1960s and ’70s, the 1930s were a time of such totalizing repression and consequent paranoia in the Soviet Union as to largely deaden artistic literary output beyond officially sanctioned Socialist Realism.

Serge’s francophone writing escaped this fate, filling in something of a literary-historical gap. Certain themes in Midnight in the Century resonate particularly with Solzhenistyn’s masterpiece The First Circle, revealing some continuity in this kind of historical fiction. For example, both novels include chapters written from the perspective of Stalin himself that serve to underline the tyrant’s personal paranoia and apparent intellectual obtuseness. Ultimately the camaraderie and intellectual vivacity that could be found in prison or exile — and only there — is of great importance in both novels, bringing into stark relief the poisonous society cultivated by Stalin’s regime. Forced exile was the closest thing to a safe haven.

Another commonality between these novels (and many novels) is that women tend to be depicted as part of the realm of sensuous pleasure, e.g. “Lina being a nice warm girl — almost pretty and agreeably unintelligent — whose presence blended in with the subdued lighting filtering through a lampshade of tender blue silk.” While there is one important, agency-possessing female character in Midnight in the Century, overall “women” are, like sunlight, a thing that one should enjoy while it lasts, but be strong enough to live without. Such depictions are too ubiquitous in the history of literature to warrant not engaging with a given work overall, but for this same reason it is necessary to point them out. In this case there is also a particular thematic relevance: for Serge as well as for Solzhenitsyn, the role of women is often to bear the burden of carrying on with life — something that is only possible for those bound to the domestic sphere who therefore cannot be so easily compromised.

Serge was a prolific writer, both of fiction and non-fiction, and over the past decade, the New York Review of Books has been steadily bringing the English translations of his seven novels (and one memoir) back into print. While his work has an explicit historical and ideological purpose, his writing is full of light and lyricism, and he himself asserted the importance of understanding fiction as fiction, even when it is based on biographical events:

It is a mistake to try to recognize the author in his characters. Why would he create them if it were not to escape from himself, to break the rather stifling circle of the self, break with involuntary egocentrism, penetrate another being, incorporate oneself within him, and by a sort of communion attain a more general truth about man?

This core humanism and humility that led Serge to fiction is also what makes him such an intriguing character overall, and what makes his novels relevant as more than relics of their time. He was a writer and philosopher who was also a fighter and an activist, jumping from one cause to another in Russia, Europe, and Mexico, but he was never tainted or swayed by the various perversions of the ideologies he devoted his life to. I would make the conjecture that this personal fortitude was, at least in part, thanks to the fact that he never forgot about the beating hearts at the center of transnational clashes of thought and power. This quality is also present in his most heroic characters.

Midnight in the Century is the second to last of Serge’s novels. It was completed from 1936–38, at the height of Stalin’s purges, and was based on Serge’s own experience in exile in Russia in the mid-1930s. The story centers on a group of leftist oppositionists opposed to Stalin’s regime that meets and organizes in exile in a fictional village called Chernoe, or “Black-Water.” The narrative skips across the country, and tracks various characters’ descents into the vast Soviet penal system. We see the loyal Engineer Botkin travel abroad and encounter an opposition newspaper for the very first time. Despite his great caution, Stalin’s unstoppable spies catch Botkin’s indiscretion, and he’s sent to prison. But armed with a photographic memory and a newly clarified understanding of the state of his society, Botkin sets about disseminating what he learned across the vast network of activist circles in exile and prison — and one such circle is in Chernoe. Ultimately, the circle is discovered and the members are sent back to prison.

These are the broad plot strokes of Midnight in the Century, but Serge focuses on the relationships and emotions that connect the constellation of prisoners and exiles, and the ways that different characters deal with the pressure of the repression. The Chernoe exiles are the novel’s protagonists, and the careful realization of their personalities and the detailed dynamics of their group save this work from being a pure political parable.

However, it is difficult not to take the various individuals that we get to know in Midnight in the Century and their decisions and fates as each having a lesson to impart. For example, Mikhail Kostrov, the first character we meet, demonstrates the weakness and vulnerability of those who haven’t clarified their moral and intellectual purpose. Intelligent and kind, Kostrov is a traitor to himself and eventually to his friends in Chernoe. The chapter that focuses on his story is entitled “Chaos,” and by succumbing to the system and confessing his guilt after arrest Kostrov sets himself up to betray the opposition circle he encounters in exile. Kostrov’s lack of personal philosophical wherewithal is therefore itself the driver behind his experience of chaos. Had he had more self-assurance and stamina under pressure, his world would have more logic. This sense of clarity in the face of utterly absurd cruelty is an important lesson in the novel. The focused hardline leftists of the Chernoe opposition circle would not have made Kostrov’s mistakes.

Midnight in the Century may be most intriguing in the present moment for the premise put forth by its title. Facing almost certain arrest, member of the opposition circle Dmitri Elkin, a light-hearted, broad-shouldered man not cowed by the misery of the world, instructs the young Rodion, the hero of the story who delivers much of the novel’s broader philosophy, to take in the sun and fresh air before they are both locked up. Rodion, however, cannot extinguish his swirling thoughts:

“One day you’ll lie down on a cot in a disheartening darkness. Then remember the sunshine of this moment. The greatest joy on earth, love apart, is sunshine in your veins.”

“Ah! Right now it’s something of a midnight sun piercing the skull. Glacial. What’s to be done if it’s midnight in the century?”

“Midnight’s where we have to live then,” said Rodion with an odd elation.

There’s something freeing in embracing the idea that your time is the very darkest of times. It’s an idea that imposes shape onto the narrative of history, which can be galvanizing. Does the arc of the moral universe, as Martin Luther King Jr. famously said, bend towards justice? It’s a hard assertion to square with reality, and such progress-minded ideology has its pitfalls. Maybe the arc of the universe is more of a sine wave, and every century has its own midnight. Or maybe it doesn’t have any kind of shape at all. However, positioning oneself on that imaginary arc could be a way of generating energy that can propel one forward.

Rodion is self-educated and his naiveté has left him vulnerable to having his mind filled almost exclusively with the ideas of Hegel, who sought to develop precisely a conception of meaning and direction in historical time. Rodion ponders:

“History,” said Hegel . . . “History is something we make, we are historical, too, like all the poor devils . . .” There is no certainty that this machine will stop and crumble one day all by itself. It must be destroyed. Another revolution. We will make one, and in a very different way. I don’t know how, but it will be very different.

His sense of the shape of history lends him agency in directing its course. It gives him the vision that empowers him to escape from prison at the end of the novel.

Victor Serge is a writer who, you could say, has skin in the game, although it is also important to note that his work, though instructive, is not didactic. It’s quite beautiful, and full of moments of mystery and wonder, reveling in sublime incomprehension. Nonetheless it is the product of a time of big ideologies and tectonic cultural and political shifts, where both the forces of oppression and the potential for radical change loomed with a monumental heft that is no longer present on any side. It’s easy to read his work with nostalgia for that time, however bleak it was, and the sense of purpose and direction that his heroes held. One argument he makes quite well, that seems worth considering, is that whether or not the arc of the universe bends towards justice, rather than dismantling this assertion, it might be better if we could hold onto the idea that it might. If we try to bend it that way, maybe it could. But it might also be necessary to imagine new shapes for the universe, as well as new positions and directions to move towards.

Helen Stuhr-Rommereim is a features editor for Full Stop and is a founding editor of Fungiculture.