The University of Pennsylvania – Caren Beilin 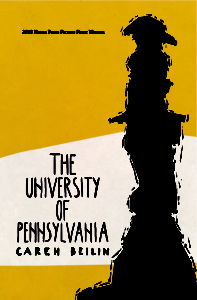 Sometime last year I turned up at a conference where an academic, recently contracted by a major university press to write a book about Kathy Acker, spoke about the connections between Acker’s writing and 20th-century French feminisms. Over the course of her talk, she held forth about how Acker drew on the thought of philosophers like Luce Irigaray, Simone de Beauvoir, and Hélène Cixous while writing books like the then-incendiary Blood and Guts in High School. Reading Cixous in particular challenged the young Acker to come up with forms of writing that would contest the entrenched phallocentrism of language and begin to inscribe feminine experience.

We heard how Acker’s writing of the abject, dysfunctional, and sexual female body into her texts, was inspired by Cixous’ idea of écriture feminine. This notion was impressionistically portrayed in the latter’s The Laugh of the Medusa as “a new insurgent writing . . . an act which will not only ‘realise’ the decensored relation of woman to her sexuality [but] will give her back her goods, her pleasures, her organs, her immense bodily territories which have been kept under seal.” A collage of illustration and text, scrawled dream maps, fragmentary travelogues, incest erotica, and almost-autobiography, Blood and Guts was a great example of the rise of écriture feminine in America in the 1980s.

It was a robust and well-received appraisal of Acker’s debt to Cixous but I couldn’t help but despair a little of what I felt was an excessively straightforward historiography of a literary style: The Laugh of the Medusa came out in English in 1976; Acker read it and liked the idea of an insurgent feminine writing; throughout the 1980s she experimented with different transgressive ways of writing the feminine. Wasn’t there a time when we were more suspicious of accounts like this? When we were wary of defining willfully confusing ideas like écriture feminine, in case we’d negate their mobility and capacity for subversion? When rather than worry over old innovations, we speculated about the new forms that might be written and the people who might write them? It felt as if I had caught academia picking the bones of the High Theory it had brought to the attention of thousands of interested and politically engaged readers during the 1980s and 1990s.

They were simpler, more naïve times perhaps. Back then language itself was understood to aid and abet the structural misogyny of Western society and readers were more easily persuaded of the politics of literary experimentation — notions that in the intervening years seem to have quickly lost traction. A glance at a selection of recent, critically acclaimed works by women writing about female experience indicates an almost complete indifference to the idea that language might be a problematic medium for its expression.

Despite their various approaches to contemporary female subjectivity, people like Alyssa Abbott, Sheila Heti, and Lena Dunham write as if language were beside the point. Although they seem to agree with Cixous’ call to “write your self,” the form that writing takes often feels like an afterthought. Even Joanna Rakoff’s more conceptually ambitious My Salinger Year, a great memoir that elegantly juxtaposes the author’s coming-of-age story with that of Salinger’s Holden Caulfield — even here language is treated as politically rather inert. Considering this admittedly small sample of well-regarded writing by women, perhaps it’s no wonder écriture feminine was characterised as merely a phase — an interesting but pretty much marginal episode in the development of women’s writing in the United States.

On the other hand, this account may just be academic criticism doing what academic criticism does best: separating writers out into categories, setting one work against another, mainstreaming, marginalising, manufacturing taxonomies almost by fiat (women’s writing, experimental women’s writing, experimental women’s writing of the 1980s, etc.). Literature is so confusing — to study it and figure out how it works and argue for its necessity it’s got to be devolved into genres or genders or proscribed by periods. Caren Beilin’s The University of Pennsylvania casts such operations as symptomatic of a deeper and subtler impulse, however — they arise out of a violent and historically masculine obsession with maximum visibility and logical order, otherwise known as phallogocentrism. Beilin’s book emphatically demonstrates the continuing relevance of écriture feminine by exposing this desire and contesting it, viscerally.

The work opens with a diagnosis: UPenn undergrad Olivia Knox has womb duplicatum or a double womb. Her menstruation is consequently continuous and throughout the narrative she bleeds and drips blood in a ceaseless flow that won’t be stanched or slowed, not by diapers or tampons or oven mitts. The blood pools in chairs, dries on bedclothes, stains car seats; “it is not just blood! It is full of marbles and beans, something thick enough to be black, sometimes sick enough to be brown, sometimes wild, almost violet again.”

Olivia’s indefinitely extended period won’t be contained by the routine of university life. She labours to covertly soak up all the blood and squirms uncomfortably in literature seminars: “gore swirling onto her chair,” Beilin epigrammatically writes, “she cannot get her plots straight.” In Olivia’s imagination, the encounter between her bleeding and the university is something like a scene from The Shining.

She is filling the University of Pennsylvania full of blood, she thinks — filling its cracks, its pipes, and soon enough the faucets will speak her problem, the lecture halls and library groups will lift up on a sea of welling, now bursting, murderwater. Only a matter of time.

Her vision turns out to be remarkably prescient and by spring semester she is told that her menstruation, which she has trickled and bled and plopped in droves of tampons down the dormitory toilet has finally burst its banks: “the building is full of your blood, Olivia, a burst pipe they think, and the carpets need cleaning.”

At school Olivia meets Beth and Adele, orthodox Jewish sisters who both have homosexual trysts in the fall semester — Adele with Olivia and Beth with a cokehead Quaker called Antigone. Coked up, Antigone loquaciously reveals her love for the founder of Pennsylvania William Penn, and recalls fucking a bronze statue of him while being watched by a nearby statue of his lover George Fox, the founder of the Quakers: “I allowed William Penn to enter me entirely, his cock, which he preferred to offer to George Fox, now into me, up touching me, his cock strong — ‘Oh William!’” Her account rises to a crescendo with a panting ecstasy of figuration.

I stared into the curved coinish eyes of my lover, in awe of the quivering happiness I could conjure, my pink flub of clitoris now tremulous, the drooping flub now flexible, a fire of feathers internal, a pink blur, turned into a violet feeling of an air-wired almond in my anus, turned feather again, now pink smoke in my stomach, now the flub sobbing, now muscle-hearted glitter, my heart with the feeling of a tingling balloon, and then: alchemy of an orgasm, wood into golden, a stone flaming.

Antigone is the daughter of a university professor, Dr. Edelberg, who lectures in vivisection and is associated with the Nazi scientist August Hirt — infamous for defleshing the corpses of his subjects. Olivia is the daughter of a wealthy Pennsylvanian industrialist who made his money in gelatin production — defleshing and boiling down the bones of animals. Beth remembers her mother, paralysed in a swimming pool. Olivia has a half-brother who, it turns out, is her university tutor. William Penn writes love letters to George Fox; George Fox reciprocates. The University of Pennsylvania is made up of such a strange profusion of storylines it’s hard to get the plots straight. They keep overlapping and intermingling, bleeding into one another, overflowing the chronological structure the book borrows from the academic year. The text seems to swim before your eyes, challenging you to proscribe plots and make narrative classifications, which are quickly destabilised by its writing.

One of the most fascinating traits of Beilin’s prose is the way that words tumble into each other, dissolving their distinctions into portmanteaus: “‘Just drive,’ Olivia told her mother, and Mrs Knox — who was usually too frail, sick, and tired, to drive, or love — drove.” Elsewhere repetition and assonance causes clotting: “Beth kneels, devout to it, devout to kneeling, but needing reasons.” Descriptions of female anatomy in particular are characterised by a constant drift towards the figurative: Olivia’s hand is “a small splayed bouquet of bones”; a breast is “the weight of bread forgetting itself”; the clitoris is “a rooster’s drip of throat,” “a rodent’s red liver,” “the flower of guts,” “the bedraggled lung of something waterous, a barracuda’s ripped reason for breathing, hanging in the open, with rancid coral hueing.” Like Antigone as a child, rolling around in a park, flashing her underwear, The University of Pennsylvania seems to speak “in a language parallel to language.”

If we had to call it (which we don’t but we will because, as Olivia discovers in her literature class, criticism “seethes” in the “cleavage” of things), the novel’s theme might be the tension between confusion and classification — chaos and control. It courses through the work, appearing as the friction between Antigone’s writhing sensuality and William Penn’s cold bronze stasis, or surfacing in the conflict between Olivia’s condition and the university she inhabits, as flood and regulation. These competing forces are, of course, gendered and, saturated with chaos and confusion, suffused with the unwieldy body historically associated with femininity, Beilin’s work is evasive, unruly, nonsensical. Mess and disorder writ large in blood and guts, The University of Pennsylvania is écriture feminine at its most beautiful and bewildering.