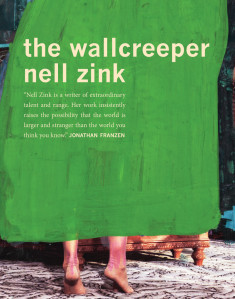 Nell Zink is a mysterious figure. She’s published a few pieces in n+1, including a hilarious play, “Two Scenes,” as well as an unconventional essay on the ethics of hunting. Otherwise she hasn’t published much. Her style, which could be called “energized,” suggests she’s a young writer, maybe a precocious grad student, maybe America’s funniest literature TA. Yet according to the bio in the back of her debut novel, The Wallcreeper, she was born in 1964. She’s a baby boomer! Why write now, Zink? Where have you been all these years?

The Wallcreeper is, perhaps above all else, a disorienting novel. David Sedaris once quipped that speaking German is like speaking English but “sideways” and reading The Wallcreeper — which happens, incidentally, to be set in mostly German-speaking places — feels like reading but sideways, thinking but sideways. This has something to do with the strangeness of the plot: the novel follows a prematurely married and routinely unfaithful American couple, Tiffany and Stephen, as they travel Europe in search of birds, EDM, and opportunities to commit minor acts of eco-terrorism. The sideways quality also has something to do with the novel’s prose: fluttery and funny, it calls to mind Rivka Galchen’s American Innovations, if Galchen’s narrators suffered car accidents and were speaking of out shock; you can’t tell whether to laugh or call an ambulance. But there’s something more to it, something enigmatic.

The novel’s narrator, Tiffany, a self-proclaimed “housewife” who admits she’s “not a feminist,” is herself enigmatic. At once admirably perceptive and frustratingly passive, she recognizes the problems in her life and marriage with sophisticated clarity yet does nothing to fix them. She recognizes, for example, that she’s never “come up with a step . . . in life” for her “own sake,” that she’s done “all kinds of things, all of them with the aim of staying close to a man,” yet still she follows Stephen from Philadelphia to Berne, Berne to Berlin, and Berlin to Albania, where Stephen goes bird watching on a donkey, which Tiffany leads with a rope. Tiffany recognizes that by remaining married to Stephen she has “followed the chief guiding principle of the petty bourgeoisie in modernity . . . But,” she continues, bathetically, “there are reasons they call it necessity, so I decided Stephen’s stability was good for me.”

Such “negative capability,” as Tiffany at one point labels her self-aware passivity, makes it tricky to label her fundamental problem. Is she cynical? Apathetic? Nihilistic? Maybe she’s weighed down by her numerous insecurities. At different times she calls herself “demimondaine,” “naïve,” a “mindless whore.” Or maybe she has a problem without a name.

Tiffany meets Stephen at a pharmacy in Philadelphia. Here she works as a receptionist, and he’s applying for a pharmaceutical research job in Berne, Switzerland. Unbeknownst to Tiffany, Stephen is a virgin. Unbeknownst to Stephen, Tiffany’s understanding of relationships is virginal. Three weeks later, they’re married. “We didn’t talk much about what we were doing,” Tiffany recounts. “We had a deal.” Stephen lands the research job and together they move to Berne. Tiffany gets pregnant, thanks to a faulty condom. On one of their first trips together, a bird watching trip, Stephen captures a wallcreeper: a “small passerine bird,” according to Wikipedia, “found throughout the high mountains of Eurasia.” Then he swerves the car and hits a rock and occasions a miscarriage. From then on, their marriage is like a hexagon and a triangle stuck in a game of Tetris. Whatever they do, they cannot fit together, yet they try, again and again. Just as Stephen and Tiffany choose to imprison in their house the wallcreeper (which Stephen names Rudi after Rudolf Hess “because its colors were those of the Nazi flag”), they choose to imprison themselves in their marriage.

One of the only things that Tiffany does actively and for her own sake is sleep with men who are not her husband. In The Wallcreeper, adultery abounds. Unfaithful sex is so abundant, actually, that it becomes repetitive and monotonous, more like Pong than porn. One of the many men in Tiffany’s life, Gernot, a “radical priest,” explains to Tiffany — the novel is full of mansplainers — that “‘it takes conditions of artificial scarcity to make satisfying basic needs seem beautiful. Our society works hard to make food and sex as scarce as beauty and love.’” Does Tiffany sleep around because she finds sex beautiful? This could be true, but it could also be untrue. A frustrating aspect of reading the The Wallcreeper is that it keeps raising such questions while leaving the answers, like the birds its two main characters chase across Europe, up in the air.

The Wallcreeper is as much about environmentalism as it is about a damaged marriage. At the beginning of the novel, Stephen praises global warming for raising temperatures and then grows gradually more radical in a typically straight white male way — he ignores gender and race. His political makeover starts in Berne, where he first develops his obsession with bird life. He just can’t get enough of the tiny tweeters. He buys Tiffany $2,000 binoculars as a wedding present. The next phase of his makeover comes when he meets a white activist with dreadlocks. (He tells her she resembles “the alien in Alien” and a few weeks later, they’re hooking up). Stephen decides, along with Tiffany — or rather, Stephen decides and Tiffany acquiesces — to move to Berlin, where his dreadlocked mistress, Birke, lives. Through Birke, he gets involved with Global River Alliance, an organization “modeled on Green-peace and the WWF.” According to Tiffany, “regular contact with the environmental movement” turns Stephen into a man who speaks “his mind clearly and purposefully.” He presents his work at “The Rhine Conference.” He quits his pharmaceutical research job. He aligns his mind and heart with a Higher Purpose. He DJs.

But The Wallcreeper doesn’t reflect the environmental concerns of the real world so much as it humorously deflects them. In the novel, things fall apart, the center cannot hold, and activists like Stephen are loosed upon the world to save it by protecting bird populations, changing water levels, removing artificial dams, and distributing flyers. It all feels a bit off, a bit skewed, a bit sideways. Kafkaesque but not quite. Absurdist but not really. It’s tricky to label the novel (an environmental-domestic comedy?), just as it’s tricky to label its narrator’s fundamental problem (post-miscarriage depression?). Whatever you should call it, The Wallcreeper suggests that people would most benefit the environment if they left it alone.

In the final pages of The Wallcreeper, something tragic happens, something bleak to Tiffany’s marriage — I won’t spoil it. In response, though, she still refuses to change her ways. Is The Wallcreeper therefore a warning for women to embrace feminism, lest they end up like doomed Tiffany, aimlessly following “the chief guiding principle of the petty bourgeoisie in modernity” from one European city to another, like a traveling yuppie circus? Or is The Wallcreeper a marriage plot rendered to show how out of place and hopeless traditional marriages nowadays are? Or maybe it’s a warped mirror, held up to timely topics — surveillance, late stage capitalism, patriarchy, environmental apocalypse, Berlin, EMD — in such a way that it both distorts and reveals the present age? I’m not asking these questions rhetorically. I really don’t know the answers. The Wallcreeper, like its mysterious baby boomer author, is confounding. I read it with a perpetual smirk and a perpetual scowl. I must have looked like an idiot.

Gavin Tomson‘s writing has appeared or is forthcoming in Salon, The Awl, Joyland, Maisonneuve, and Full Stop. He’s the winner of The Dalhousie Review‘s inaugural short story contest, a Copy Editor for The Puritan, and a book reviews columnist for a new magazine called HWY. He lives in Toronto.