Some Ideas on Intimacy (Part II) 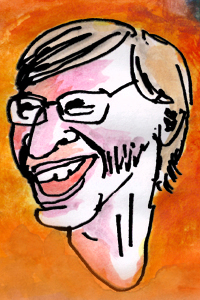 Read the first part of Jason’s Ideas on Intimacy here.

I saw my first live stand-up last week: Tig Notaro headlining the New York Comedy Festival. When I was 12 my parents gave me George Carlin’s Napalm and Silly Putty, but other than a serious interest in Saturday Night Live — John Belushi, Chevy Chase, Eddie Murphy, Adam Sandler, Bill Murray, Gilda Radner, Cheri Oteri, Dana Carvey, Mike Myers, Chris Farley, Tina Fey, Keenan Thompson — I didn’t start watching stand-up until my Bubbe died. After the funeral, we were sitting shiva and my cousin, Matty Litwack, told me about Rory Scovel’s strange sets on Conan, tuxedoed and accompanied by lounge jazz or drinking a beer and thinking very hard about Lunchables. I started watching all the stand-ups on Team Coco’s YouTube channel, which is how I landed on Tig Notaro’s now famous story about her awkward encounters with 80s pop star Taylor Dayne: “Excuse me, I’m sorry to bother you, but I just have to tell you, I love your voice.” Then her “stool movement” set, in which she pushes a bar stool around stage, the honking and squeaking noises bringing the audience to hysterics. Best know for her dry and calculated delivery, Notaro’s humor always feels choreographed and improvised, guarded and vulnerable, intimate but mocking herself and the audience. She had a breakout success on August 3rd, 2012, when she performed in spite of and about her bilateral breast cancer diagnosis. Her double mastectomy has become a frequent topic in her stand-up, usually in the context of her already “boyish” figure — the title of her current tour is “Boyish Girl Interrupted.”

On Thursday, November 6th, Tig performed half of her set topless. While telling a story about an uncomfortable airport pat-down — uncomfortable for the TSA officer who couldn’t decide whether Tig was a boy or a girl — Tig started to take off her blazer when an audience member yelled, “woo!” Tig threatened to strip if she heard any more “woos,” which of course inspired a few daring fans. She followed through and unbuttoned her blouse. Tense laughter, scattered applause, and enthusiastic cheers. By taking off her shirt, Tig both demanded that the audience deal with her body — skinny, boyish, mastectomy scars and all — and to give up on “figuring it out.” In the uncertainty of whether or not the strip was choreographed or improvised, the audience and Tig enjoyed a comic, awkward, and involuntary intimacy, meaningless except as a theatrical performance.

The theater of intimacy is a constant in Tig’s stand-up. She invites the audience in on the joke, in on the manipulative and scripted secret of even the most improvisatory comedy, like when she references again and again her “physical humor,” pawing like a cat, noticing the laughter that follows the gesture, acknowledging and naming it: “kitten paws”: and then returning to the gesture, taking it to its limit, exhausting it and in that exhaustion reaching absurdity. In her finest gimmicks, Tig provokes Pavlovian laughter from the audience. Self-reference, repetition, and meta-comedy allow Tig to force her audience to laugh even when they know they shouldn’t. For example, she does an impression of a person doing impressions or references in a nonsensical way the entire field of toilet/scatological humor with her “stool movement,” or tells a baroque and boring story about meeting an aging pop star over and over again, which references the very kind of awkward intimacy upon which her comedy depends. A contract between Tig and the audience to laugh at the unfunny becomes funny by virtue of being laughed at. Tig’s topless set is the extreme edge of her style and yet alien to it because there is an unfakeable, unshielded vulnerability in revealing the body, in going beyond reference and repetition to disclose what is referenced and repeated: to display her self-avowedly boyish and scarred body, to make it the subject of humor and the subject of sympathy and the agent of power, the site where we laugh and feel compassion and sense that a new emancipatory way of being in public has emerged: the naked body on stage, choreographed or improvised, vulnerable and powerful, that is, as the theater of intimacy.

After I wrote that last paragraph about Tig’s topless set, I thought that this essay might have become about lesbianism, or had turned from an essay about Elizabeth Bishop’s cookbook to one about an unknown woman and her kimono to one about Tig Notaro, and through those lines of thinking had dragged to the surface a big fish… The idea of me writing an essay about lesbianism or lesbian desire is ridiculous because I have no way of knowing the first thing about that experience. In fact, it may be one of the most inaccessible forms of desire to me, and so I ought to have nothing to say about it other than I have no ideas. I have no ideas. But the idea of having no ideas, or being uncertain about the experience of lesbian desire in Elizabeth Bishop’s poetry or the empty sleeve or Tig Notaro’s standup seems to extend to all forms of desire beyond those immediately my own, and further, to the problem of knowing another’s body or the self, which is both the motive force of desire and the source of anxiety about embodiment. For example, I cannot speak to the experience of male heterosexual desire or to the experience of being in or having a male body, because of the radical uncertainty I experience about the existence of my own. The division in the Western philosophical tradition between “I have a body” and “I am my body” admits another form of embodiment — I might have a body, I might be my body. Not necessarily in regards to the gender of the body, but rather to its material existence. Is there a body here? Asking about lesbianism then admits a series of questions about intimacy, desire, and their traces in the objects and bodies they inhabit or leave behind, and returns us to a question we have not yet asked about how to become intimate with our own bodies. What do we desire from ourselves?

To ask myself the question, what do I desire from myself, is to ask myself to find a passage from a book I have forgotten or to remember the detail of a dream — what was her name, who did I kill, what was he wearing, a striped sweater or scarf? The image must slide away, the specific consumed in darkness. The hint from the periphery that something is there, but what? And so I cannot find the quote on death in Schopenhauer that has moved me. The words have vanished from the book like the detail of the dream or the self in death.

The detail I cannot remember is how I hurt myself. To injure oneself in a dream — my arm fell asleep, I struggled to wake it, and when I succeeded I whipped my still tingling and clenched stump towards my groin. The sensation first of having no arm at all and then of regaining command over this dead limb attached to my torso made it seem as though the awful pain in my groin came another man’s hand. But all of this happened in the early morning and I forgot the incident to sleep another hour. Later in the day I felt a twinge and the events of injury came back to me, though now in the form of a dream — that is, I remembered injuring myself as if the injury had happened in a dream and became real nevertheless. What I know to be real but believe to be a dream has crossed from the night to the day and brought with it the horrible idea that there is no real boundary between dream and sunlight — a cliché — or that there is nothing real besides that boundary — unthinkable. I am reminded of the unintelligible passage in Cormac McCarthy’s The Crossing where one traveler accosts another with a story about a dream in which the subject of the dream is neither the dreamer nor a character in the dream, but instead a person in a different world dreaming the dreamer. The experience of feeling we are the dream of another is the substance of the nighttime injury. The harm that we do to ourselves but cannot believe.

I found the passage from Schopenhauer that I was looking for. It was not in The World As Will and Representation, as I had suspected, but in his essay Short Dialogue on the Indestructibility of Our True Being by Death. I had been frantically looking for what I knew to exist in a place where it was not:

As an individual, with your death there will be an end of you. But your individuality is not your true and final being, indeed it is rather the mere expression of it; it is not the thing-in-itself but only the phenomenon presented in the form of time, and accordingly has both a beginning and an end. Your being in itself, on the contrary, knows neither time, nor beginning, nor end, nor the limits of a given individuality; hence no individuality can be without it, but it is there, in each and all. So that, in the first sense, after death you become nothing; in the second, you are and remain everything.

My problem with achieving intimacy with myself is that I occasionally think that I have died, or have become unstuck from a time that should have been. I remember the injury that I dreamed. So I find myself in the theater of intimacy, choreographed and improvised, soft and shielded, real in reference to itself. Living as the kimono perfumed on its stand despite months of emptiness. Reading poems I wrote to lost friends in books.

After backing myself into this ghostly corner, I wish I could ask Elizabeth Bishop what to do when the soufflé falls before your eyes. Or when strange things happen to the rice. But all we know is that she loved to give advice, to Frank, dear, who had in the Fannie Farmer Cookbook the basic elements. I wonder whether those elements weren’t in the recipes at all, but trapped on the title page. Not in the content of Elizabeth’s verse, but in their basic presence. The act of writing out, to a friend, as putting the kimono back on the body, as taking the blouse off to bare the body and its scars to the audience, as finding the passage where we did not expect it, as remembering the injury of the dream as nothing more than a dream. The promise of an intimacy with ourselves that transcends performance or the theatrical then depends on establishing an intimacy with others, with verifying our idea of our personal reality, of what our bodies might mean and feel like, with the people we love and trust most, our friends.