Neil deGrasse Tyson Explains the Science Behind How High 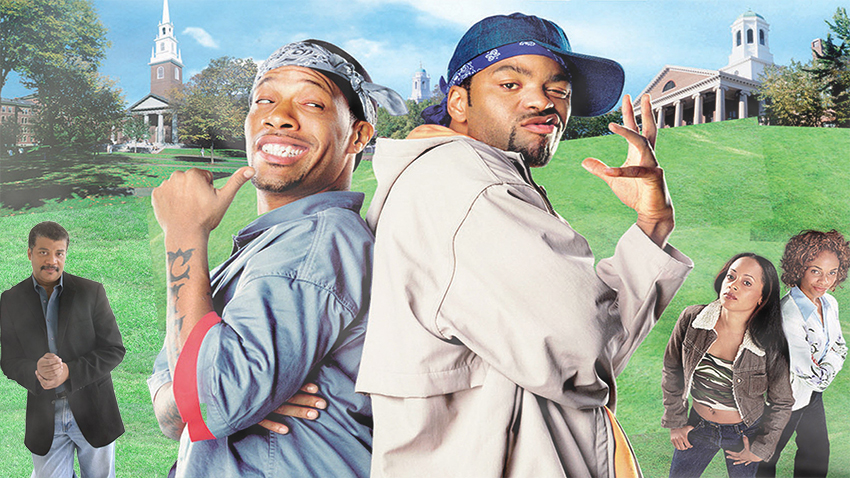 How High is a classic college stoner movie starring rappers and frequent collaborators Method Man and Redman. It follows Silas (Method Man) and Jamal (Redman), two underachievers who are accepted into Harvard after receiving answers to their admission test from the ghost of Silas’s recently deceased friend Ivory. The omniscient ghost appears only to those who have smoked the marijuana that Silas has grown in a pot of Ivory’s ashes. When the plant is stolen, however, Silas and Jamal must learn to succeed on their own.

After seeing on Twitter that renowned astrophysicist, television host, and film critic Neil deGrasse Tyson is also a fan of the movie, I got in touch with him to find out what the film got right and what it got wrong.

Eric Jett: So. How High. How many times have you seen it?

Neil deGrasse Tyson: From start to finish — at least a dozen times.

It’s one of my favorites. What’s not to like? Science, ghosts, romance, Harvard. Essence Atkins. I never turn the channel when I see it playing on TV — and that’s not just because I went to Harvard myself. Rarely are science and the stoner film so seamlessly fused.

Just as a little bit of primer, could you start by explaining how exactly marijuana facilitates paranormal experiences?

Well, Eric, the primary psychoactive compound in marijuana, THC, interacts with the body’s natural endocannabinoid system, attaching to presynaptic cannabinoid receptors in different parts of the central nervous system. This interferes with the regulation of communication between neurons, resulting in various effects, including euphoria, anxiety, impaired coordination, altered thought processes, and, most important for this discussion, increased sensitivity to transpathic energy, which the brain normally filters out. This energy, commonly referred to as vibes, is always around us. Objects emit it. People emit it. And it turns out, ghosts emit it. Many animals, like sloths and koala bears, remain highly receptive to vibes, but we have evolved to tune them out in favor of higher executive functions.

Why don’t we see ghosts every time we get high then?

So it turns out that when you get high, most of the vibes you encounter are simply those of the particular plant you’ve smoked. We’ve actually known this for quite some time now, but what we didn’t discover until recently was that when a plant is grown in soil containing a person’s ashes, that person’s unique vibe signature is transferred to the plant, almost like a file getting uploaded to a server. And this is where things get really interesting, Eric, because if that plant also happens to contain psychoactive compounds, like cannabis does, those vibes can actually be transmitted the other way, from plant to person!

Well, the whole process is a bit more complicated than the film lets on, but basically, the vibe-laced compounds, including THC and others, hitch a ride to the smoker’s brain, where they start grooving with its various vibe centers to essentially “tune in” to the vibes of the plant and, thus, the deceased. Imagine tuning your radio to a station, only instead of hearing today’s hits and yesterday’s favorites, you’re seeing ghosts.

Incredible! I think I actually read something about vibes in the news recently.

You probably did. There’s some very exciting research being done in vibe physics right now. There’s even a team in Germany that believes we could one day resurrect a person by channeling their lingering vibes, found in their former homes and haunts (laughs), into some kind of vessel, like a machine or even a corpse. That’s pretty far out, even for vibe science, but it’s not outside the realm of possibility.

Now I’ve heard that there are good vibes and bad vibes — is that right?

Good, bad, and so many more. We’re only just beginning to discover all the different kinds of vibes that are out there. We used to think there were just good vibes and bad vibes, but it turns out that bad vibes alone can be broken down into willies and creeps and heebie-jeebies and static, just to name a few. We’re starting to think there are as many vibes as there are subatomic particles. Maybe more.

Does that mean we’ll be hearing about a “god vibe” soon?

(Laughs.) Maybe so. Let’s just hope the god vibe is a good vibe and not a bad vibe.

With that, let’s delve into How High. I’d like to start with one of my favorite scenes from the film, Jamal’s Theory, which predicts —

Exactly. So is there any truth to it?

I think if you asked my teachers from high school, you would get the same answer from all of them. And sadly, from me too. Jamal’s Theory sounds plausible at first, but if you look closer, you can see that it is founded upon a common logical fallacy, that of equivocation. You see, Jamal uses the word high three times, but the word does not mean the same thing each time. This is known as polysemy. The first two occurrences of high refer to the state one enters after using mind-altering substances — in this case, marijuana. However, the theory’s conclusion uses high in a completely different sense, meaning “above average.” Of course, in a bit of dramatic irony, the film itself recognizes this mistake even if Jamal and Silas don’t. That’s why they fail their midterms later, despite all of their studying. In fact, though marijuana is great for summoning the dead, it is terrible for the memory.

Tell me about it.

After the marijuana plant with Ivory’s ashes is stolen, Silas and Jamal dig up President John Quincy Adams, hoping to communicate with his ghost instead. But when they smoke him, nothing happens. Why? Is it because they didn’t grow the pot from his ashes first?

There is a lot wrong with this experiment, as with most experiments conducted purely out of desperation. Scientists in the lab have been able to summon ghosts with marijuana for only fractions of a millisecond. And that’s with dank weed grown fresh from newly deceased animals. Here, we have neither of those conditions. John Quincy Adams died in 1848 — over 150 years before How High was released. We have no idea whether a person’s vibes can linger that long without a host. Plus, as you have mentioned, Silas and Jamal did not grow the marijuana in his ashes — they merely added his remains to the weed afterward. This might make for a good spliff, but it is not sufficient to transfer vibes to the plant. Maybe if you let the bud marinate overnight, but even then, it’s a stretch. It is also important to note that communicating with the dead is not a one-way street. It is not enough to simply wish to reach the dead; the dead must wish to reach you as well. Before he died, Ivory promised to help Silas, and that’s what he does. As far as we know, John Quincy Adams made no such promises. Unfortunately, the Adams experiment was doomed from the start.

Interesting. That actually leads to my last question. The big question.

How does Benjamin Franklin appear in the final scene without anybody smoking his remains?

I admit that, like a lot of people, I have struggled with this scene. Some have speculated that it is the presence of Franklin’s waterpipe, the Liberty Bong, that allows Franklin to manifest. This theory seems to be a bit of a reach to me, though. Sure, our vibes are often present, at very low levels, in and around treasured possessions. However, if John Quincy Adams’s bones did not contain sufficient vibes, I doubt that Benjamin Franklin’s bong did, considering Franklin died nearly 60 years before Adams. Also, a little quibble here: Though the movie credits the invention of the bong solely to Benjamin Franklin, Sir Isaac Newton actually developed his own independent system, the Gravity Bong, around the same time in England. Anyway, at the end of the day, we have to remember that vibe physics is still in its infancy, so we can’t expect everything to make sense to us yet, especially not in a film, the loyalties of which ultimately lie not with science, but with the story and the audience. Maybe Ivory’s ghost was able to bring Ben Franklin along via some kind of transpathic resonance, attuning Franklin’s undetectable vibes with his own. The science just isn’t there yet.

Is it possible that Ivory and Benjamin Franklin just have the same vibes?

Possible? Absolutely. Probable? Absolutely not. Sir Francis Galton, the pioneer of fingerprint identification, estimated the odds of two people having the same fingerprints at one in 64 million. From what we can tell, the chances of two people sharing the same vibe signature are probably much lower. Even newborn identical twins have very different vibes. Anecdotal evidence does exist of women living closely together for extended periods of time synchronizing vibes, but even then, the vibes are surely not exactly the same. The most likely explanation to me is, I think, the simplest one, which is that this scene was merely meant as a bit of farce, a touch of absurdity at the end of an otherwise faithful stoner film.