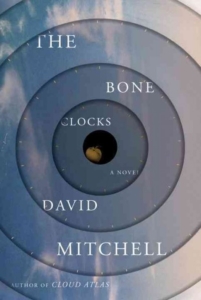 I meet Holly Sykes on the first page of David Mitchell’s The Bone Clocks and immediately can’t stand her. It doesn’t help that the first sentence consists of rote teenage-girl-fawning over a boy: “. . . I’m already thinking of Vinny’s chocolatey eyes, shampoo down Vinny’s back, beads of sweat on Vinny’s shoulders, and Vinny’s sly laugh, and by now my heart’s going mental . . .” It’s 1984 in Gravesend, England, and knowing Mitchell’s penchant for referencing disparate characters across his books, the only intriguing possibility I see on the horizon is the potential for Jason Taylor, the 80s Worcestershirean protagonist from Mitchell’s Black Swan Green to show up at some point. I figure I can stick it out at least that far, since I loved Jason’s character so much.

Turns out I was right about Jason making his way into the book (albeit extremely briefly), but couldn’t have been more wrong about Holly. This initially stereotypical boy-crazy teenager is woven into and around every single section of the novel, which ends up spanning sixty years and several countries, so thankfully Holly is far and away the most interesting character in it. While we only see her through her own eyes as a teenager and as an elderly woman, Mitchell fleshes out her intervening years from several different perspectives: lover, husband, fellow author. The final effect is that of an intricate mosaic, all the pieces fusing into an entire lifetime, a framework that offers Mitchell ample opportunity to play with the past, present, and future of Holly’s (and our) world.

He’s not the only one playing with time, as you’ve probably surmised from the novel’s title. The plot centers on a clash between the Horologists (souls that are continually reborn into new bodies, year after year, century after century) and the Anchorites (those who use murderous means to extend their own particular body’s life). The titular “bone clocks” is a derisive term used by the Anchorites to describe normal humans, condemned to a single lifetime before their souls enter the Dusk and make their way to the Last Sea, never to be seen in this world again. While a couple members of the Horologists have existed for millennia and have no idea why they were chosen to experience their recurring reincarnations, the Anchorites were created by a member of a heretical Christian sect mere hundreds of years ago. He discovered that by “decanting” even a small amount of “psychosoteric” essence from a human and consuming it, he could extend his own life at the cost of another’s, and thus the Anchorites were born. The Horologists have been conducting a hidden war against them ever since, in order to save those human souls from murder.

Still with me? It’s to Mitchell’s credit that all this hidden-society, crypto-historical terminology is never overwhelming or distracting from the characters themselves. The Bone Clocks ends up resembling The Da Vinci Code only in the way that Twin Peaks resembles Dallas. It’s startling when Holly experiences her first vision of this hidden world as a teenager, mainly because everything she has been thinking about up until that point (boys, music, rebellion) had been so quotidian. But to suddenly dive into imagery like this after what had been a largely bucolic affair early on was simultaneously horrific and enlivening:

The old saint’s mouth’s opened, full of shark’s teeth, and metal screams and stone groans. Figures and shadows appear like a shadow-puppet show in the mind of someone going mad. One older man springs onto the table. He has piranha-fish eyes, curly black locks, a busted nose, a black suit, and there’s a strange indigo light coming off him, like he’s radioactive . . . Black flames and a roaring loud as jet engines fill the place, and I can’t run and I can’t fight, and I can’t even see anymore so all I can do is stand there and listen to voices, like voices shouting as a building collapses on their owners . . .

What I had thought was going to be a fairly standard teenage narrative was obviously going somewhere else entirely. And while Holly is the stand-in for the reader as she discovers this world, and is the through line that ties all the disparate sections and decades together throughout the novel, Mitchell uses his other characters’ sections to provide some welcome outside perspectives on the world around her. We see the ski resort bar where Holly works in the early 90s through Hugo Lamb’s eyes, on winter break from college and unexpectedly infatuated with her after a chance encounter. Ten years later, Holly’s husband is a reporter working out of war-torn Iraq who’s back home for a family wedding and is himself torn between family and work abroad.

Next up is an author whose first book won all sorts of critical acclaim, but who has struggled to rise to those same heights with subsequent novels, and who initially thinks that Holly’s newly-published nonfiction phenomenon is less than deserving, to put it nicely. This section in particular provides Mitchell with wonderful opportunities to slip in casual meta-digs at his own authorial career: “What surer sign is there that the creative aquifers are dry than a writer creating a writer-character?” And just before Holly’s final section, we at long last get some first-person narration from a Horologist herself (or himself — I forgot to mention that Horologists switch sexes each time they are reborn, and I imagine they would make excellent relationship counselors). Each section proves more interesting than the last, as blanks are filled in and histories are revealed, all swirling around Holly as the years pass.

The only false note struck in the whole book is unfortunately found in its last few pages, told once more from Holly’s perspective in the year 2043. It reads largely as a polemic against the destruction humans have done to the planet over the course of Holly’s lifetime — a sentiment I admire and agree with, and one that is felt on a visceral level thanks to Mitchell’s deft use of language and imagination, but one that isn’t fitting with the rest of the book’s tone. It’s a given that the denouement of any story is necessarily less exciting than the climax, but the post-apocalyptic plot and imagery here feel grafted on and jarring.

It doesn’t help that the only connection to be found to the overarching plot in the rest of the novel (aside from Holly’s few fading memories) consists of what amounts to a deus ex machina invoked in the last few pages, which feels like a blatant attempt to shoehorn this section into the rest of the book. Still, it was only a slightly disheartening end to a novel that for most of its run felt like it would never run out of ideas, and whose plot kept me intrigued and guessing for the bulk of it. As always, Mitchell wields his genre influences adeptly, and The Bone Clocks feels like a compendium of the best qualities of his previous novels and short stories, blending sci-fi, fantasy, and historical fiction into what should rightfully be a blockbuster of a book. Life is short for us bone clocks, but this is definitely worth a read before it ends.