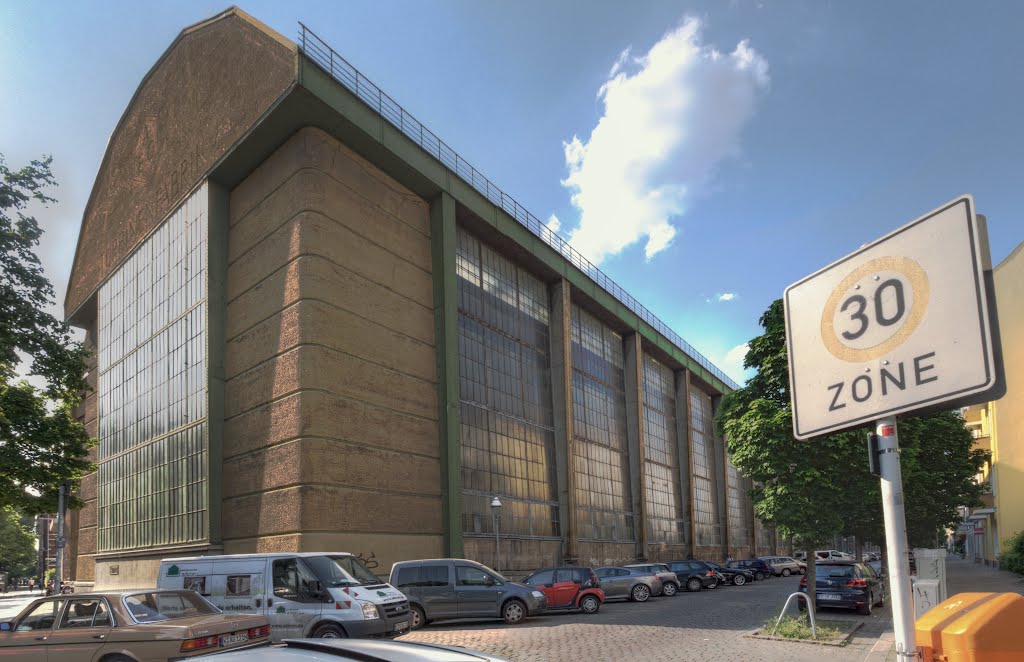 The AEG Terbinenfabrik. Courtesy of Panoramio.

For a major capital city and global cultural center, Berlin is not all that magnificent architecturally. The Schinkel buildings in the center are nice enough but hardly awe-inspiring; some might also point to the Brandenburg Gate, or Norman Foster’s dome on top of the Reichstag, but these are just straight-up vulgar expressions of power (and not even the good sort of vulgar expression of power, the deliriously bombastic sort). Perhaps the closest Berlin has to a truly iconic building is the Fernsehturm in Alexanderplatz, a comforting presence as it follows you all around the city. A 2010 YouTube video laments Berlin’s lack of architectural ambition. It claims that Germany’s capital is being left behind compared to the rest of the world, and proposes a daring solution: transforming the disused airfield behind the former Tempelhof Airport into the world’s largest man-made mountain, 1000 feet high. “The Berg,” as it is called, would become an icon for the city, looming over it from all angles, as well as radically transforming its ecosystem.

As a proposal for what to do with the Tempelhof site, The Berg was rejected by the city authorities as being “Unfeasible.”

But, I would say, Berlin does at least have one genuinely wonderful, stunningly impressive building, albeit it is tucked away in a relative backwater. Lying at the end of a long shopping street in Moabit — a working-class district of the former West Berlin that has only recently started to be somewhere the hipsters might have heard of, let alone visit — the AEG Turbinenfabrik is one of the most truly gigantic-looking buildings that I have ever seen. I say gigantic-looking, because its size, although very much actual, is also an impression resulting from tricks of its design. Exceptionally long, the thing spans the entire length of a street, but at around four stories high, it is only about as tall as everything else around it. And yet, even in terms of its height, it nevertheless manages to give an impression of immense, megalithic size; quite like a man-made mountain, perhaps.

Massive concrete bricks, steel, and glass combine to produce something that looks like it has been produced by an alien race much bigger than us, and capable of far greater things. One is left looking at it with the thought that this race has accidentally crash-landed here in Berlin at the end of this street full of kebab shops and discount clothes stores; this was the escape pod that they arrived in. The alien strangeness of the building’s apparent size is reinforced by the fact that it has no obvious entrances or exits: even its magnificent front, which calls to mind the west front of some great modernist cathedral never built, lacks any doors. The balcony that stretches along its side also appears to have no way of getting on or off it, until you spot that one of its windows is actually a trick door. And it doesn’t even really end, either: the Turbinenfabrik just sort of trails off, into another building that initially seems to be part of it, until you realize that it is actually something else entirely.

In a way, I think the aliens hypothesis might actually be a pretty good one. Certainly at the very least we must say that it gives the impression of being produced by human beings who were capable of doing something more than us, either more great or more terrible. Constructed at the end of the 1910s, the Turbinenfabrik is one of the foundational buildings of architectural modernism, stylistically transitional between Art Nouveau and what came after it, all the way to Brutalism. Its architect was Peter Behrens, a founding member of the Deutscher Werkbund, a group of artists and architects who sought to combine cutting-edge creative design with the economic imperatives of major corporations. Behrens was employed by the AEG corporation to give its buildings a unified feel: that is, to establish the company’s brand in a way that went beyond mere advertising, the brand as construction of real identity. Behrens has been called the first industrial designer in history: he was thus a crucial pioneer of the idea of the brand. Aside from the direct genealogical links from Behrens to the Bauhaus architects as well as Albert Speer, this way of constructing identity, too, has been inherited from Behrens’ work. And of course, this way of constructing one’s own identity has now intruded deep into the personal sphere; our self-conception today is shaped by the idea of the “personal brand” . . . the AEG Turbinenfabrik is usually considered his masterpiece, but perhaps in this limited sense, we are all Behrens’ buildings.

And yet this can’t quite be: because the AEG Turbinenfabrik is, as I say, also something that seems to stand radically apart from us. When I first came across it, I assumed it must be a ruin. Any building like this, if it was still standing in the UK, would definitely have become disused by now. It is too great, to seem like it could possibly have any other fate: this is a genuinely impressive building, so it can’t be used for industry. The only thing for it is demolition or to turn it into an art gallery. The mere fact that it is impressive, means that it must seem decadent: in its mere existence, as something laudable and worthwhile, it seems to stand in opposition to the profit-motive. As Sam Kriss has insightfully pointed out, capitalism at the present moment in the UK is characterized by an essential crappiness: in the name of some particular ideal of efficiency (“the seediness of efficiency,” as Kriss says), it deliberately sets out to produce things that are basically a bit shit. The AEG Turbinenfabrik seems alien to our world because, for all it can be held up as as a herald of a future that was to develop in its wake, it is very clearly a product of a world that was, for all its fault, not yet crap in the way that ours has become.

Before the dawn of crappiness, capitalism was able to produce wonderful monstrosities like this turbine factory. Now it cannot. And although I think this fact must itself be the product of a somewhat different trend in capitalism than that of the mounting prevalence of the brand, it is nevertheless through the brand (the personal brand) that this sort of crappiness is able to penetrate to our deepest selves. In a world where only the crap can thrive, we must make ourselves deliberately crap, in order to seem employable, in order to get the basic things which we need to survive. People who were once humans cultivate deliberately crap social networking profiles, they make sure they only have crap opinions, enjoy crap activities, go to crap places. Otherwise they might be caught out, as having some spark of personality, and thus become dangerous to the crap corporation to the point that they must be ostracized from all earning potential (this is why you’re meant to lock your twitter account and hide everything on your Facebook profile from search engines). Even at the moment that this humanity is prepared to express its deepest self, it produces art that is, essentially, crap art: everything Damien Hurst has done since he fucked the shark, Banksy, etc. But of course the crapness is most apparent in our architecture. Every newbuild flat is like a turd smeared on the landscape of a city.

Of course, the Turbinenfabrik is not in the UK: it is in Germany. I only thought the Turbinenfabrik might be a ruin because of what I was used to. In fact, being a German building, it is owned by Siemens, and it continues to produce turbines. I was actually really astonished when I learnt this fact, although perhaps it was because the realization followed after I had been scanning it looking for places I might have been able to break in: normally I’d be too afraid to do this because I’d be scared of being beaten up by some hired goons, but if I’d plucked up the nerves in this instance, the goons (as employees of Siemens) would have had a legal warrant to beat me up, so it could have been that much worse. But basically what I think this goes to show is that: if, in Germany, such a building can still stand – and continue to be used for its original purpose – then Germany is a country that has not passed wholly into crapness. Of course, I would not want to pretend that I thought Germany (at least, as far as I know Germany) continued to be capable of producing anything this great as-new, but the fact that a non-crap world seems capable of existing there as more than just ruins is, at least, better than nothing.

Although it would also be better if they just went ahead and built the fucking mountain.

Tom Whyman is a writer and academic philosopher from the UK. He has a monthly column for Full Stop about architecture.