What I Read Last Month (or So): Sad and True

Poetry
Kiss Me In The Boring Rain, nine poems by Niina Pollari

Nonfiction
Does it even really exist?

I have a private Spotify playlist called “All Parties Suck” dedicated to songs about suffering during celebrations. The first song on the playlist, “Whiskey Sour” by Molly Nilsson, opens with the lyrics: “Now I’m at a party / And I hate everyone.” Relatable writing, I’d argue. Too many pop and rap and rock and country songs are about how fun parties are; some parties are fun, but some are boring, and some force you into an enclosed space with people who can wound you just by existing. Or existing and looking sexy. Music doesn’t understand this feeling well enough, and that’s why Lana Del Rey’s innovative-for-pop Sad Girl persona resonates deeply enough to pull her to number one. (More on Lana later.)

Books do a much better job at capturing the agony and ennui of a good party, as in the powerful final scenes of Anaïs Nin’s Ladders of Fire. Partygoer Sabina notices an intimate and loving glance between Jay, the dude Sabina is crushing on, and Lillian, Jay’s longtime lover. So bogged down by her jealousy, Sabina falls off the page, lost to the rest of the party in a pit of her own misery. Lillian herself succumbs to anxiety: “No one is paying attention to me. I should not have worn this green dress: it’s too loud. I’ve just said the wrong thing to Brancusi. All these people have accomplished something and I have not. They put me in a panic.”

The party scene devolves from there, into a depressed and anxiety-ridden mindspace that, if you try to follow the textual clues exactly, seems to belong to another woman named Djuna (probably patterned on Djuna Barnes) — but, as I had realized before the final scenes, reading this book with textual clues as a map is like trying to navigate Narnia by following street signs.

Ladders of Fire is the first in a five-part continuous novel, collectively called Cities of the Interior. Poorly received (initially), its parts were originally released Frankenstein-like over many years and across several presses. After Nin’s published diaries obtained some popularity and acclaim, readers went back to Cities of the Interior because it was written from the same diaries, altered enough to make it fiction-ish (or autofiction, or a novel from life, as you like). Ladders of Fire contains several point of view characters, all women, all of whom should be understood as versions of Nin herself.

Which is why, reading the last pages of the book, you should ignore the fact that Djuna is the last character whose mind we were in, and embrace the loss of a solid narrator. Nin actually does give a few textual clues that you shouldn’t read the final pages of Ladders of Fire straightforwardly, switching the POV from sentence to sentence like: “Why couldn’t he bring me an ordinary chair? To single her out for this hierarchic offering was to condemn her.”

As a reader, I spent most of Ladders of Fire swaddled in a close third, in one character or another’s mind. To eliminate that structure in the final pages is unmooring, but gave me the creeping feeling that the head we were in was my own — even if the thoughts don’t resemble mine, even if the world is far from my own. This effect captures why I like autofictions (or whatever we’re going to call them) so much: in the individual, you find the universal. We are all specific people; in our own minds, we feel singular. The writer who makes themselves into fiction reminds us of that feeling. Together, we can each feel unique. 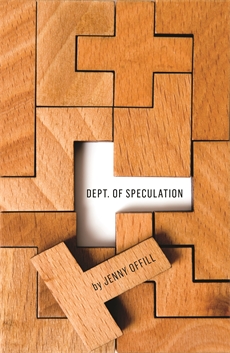 Jenny Offill uses the universal-found-inside-the-particular to great effect in Dept. of Speculation, a book that traces the course of a life and a love and the difficulties of trying to have both at the same time. It’s a moving and graceful novel, with a point of view that, close to the halfway mark, shifts from the first person to the third. In the third person, the “I” character goes by “the Wife.” Offill doesn’t shift POV casually; the change comes when the narrator’s understanding of her life is changed: she discovers her husband is having an affair.

Changing “I” to “the Wife” gives the reader — male or female, married or not — a slot to stick themselves into. The Wife becomes the self and we suffer as her. So, the sense of deep betrayal and of the hard struggle to rebuild a broken relationship had thoroughly braided itself into my psyche by the time Offill pulled out the book’s final subtle device: the last chapter slides back into first person. It starts with a tremendous use of the first person plural: “Snow. Finally. The world looks blankly beautiful. We take the dog out in it.” After pages of solitary struggle, all of a sudden, I’m not alone. I was shocked by the euphoria the first personal plural brought out of me, and the way it sold a hopeful ending to a book that at times seemed devoid of hope.

In Dept. of Speculation, Offill’s narrator, unpacking after a move, finds tiny pieces of paper she has written on. This doesn’t mean Offill wrote from her own journals, or from her own paper scraps, but reading it next to Ladders of Fire and Mira Corpora, I can’t help but imagine her doing so.

In Mira Corpora, Jeff Jackson also cannibalizes his own diaries, also fictionalizes himself as a form of self-consumption. But of the three novels I read this month, Mira Corpora feels the most like fiction when you’re reading it.

I read most of Mira Corpora while walking quickly on a treadmill, which, I would argue, is the right way to read this book. Jackson’s novel buzzes with anxious energy, as his protagonist (named Jeff, naturally) stumbles from one terrible situation to another, the transitions made opaque via section breaks. To mimic the panic and desperation that bang around inside you as you read, bump your heart rate up to at least 125 and work up a sweat.

Someone somewhere must’ve called Mira Corpora a “stunning debut.” If they haven’t, let me be the first. To the awe and envy of every debut fiction author currently writing this column, Jackson doesn’t miss a step. He nimbly navigates plot and character; his prose is a solid foundation on which the novel blooms and grows.

In the spirit of eternal revision, poet Niina Pollari took the phrase and gave it another iteration in the title of her collection of nine poems about Lana, called: “Kiss Me In The Boring Rain.” Pollari wrote her poems while listening to Lana’s albums Paradise and Born to Die, but they predict the emotional content of Lana’s newest album, Ultraviolence (which really is just a doubling down on her previous themes). As Lindsay Zoladz wrote in an essay about Rilo Kiley, the Sad Girl, and Lana Del Rey: “there can be a defiance in not only embracing sadness online, but cultivating a kind of ambiguity as to where the performed feeling ends and the ‘genuine’ feeling begins.”

Pollari’s poems remind us that the performed feeling is the “genuine” feeling; that is, the feeling is genuine, and the desire to perform it with a wink or a question mark is just a form of saving face; that is, when you are sad, you want to write a tweet describing your sadness exactly, and recounting the reasons for your sadness in detail, but you don’t because you know that in the morning you will suffer some kind of social consequence. It’s better to just tweet a Lana Del Rey lyric.

Instead of tweeting, I suggest visiting boringrain.com and reading Pollari’s poems, which give you the same feeling as listening to a sad song you love when you’re feeling sad. I love “Six,” “Seven,” and “Eight” especially. Pollari knows how to stick a landing; each final stanza left me quivering.