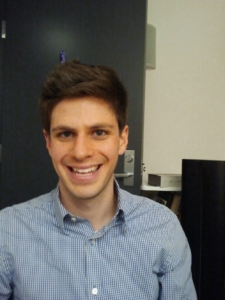 Joshua Daniel Edwin’s poetry appears in a variety of publications in print and online. His translations of Dagmara Kraus’ poetry were awarded a 2012 PEN/Heim Translation Fund Grant and appear in a chapbook from Argos Books. He lives in Brooklyn and is a member of the editorial board for the magazine Circumference: Poetry in Translation.

The poet I translate, Dagmara Kraus, is a polyglot and an allusive powerhouse. She often writes poems that begin with, and then wildly re-imagine, moments and people from history and myth. In one recent set of poems, she takes as protagonist a horse named Incitatus, who was, famously, the favorite of the Roman emperor Caligula. The poems are written in a very informal, intimate style, and at one point she invents a nickname for Incitatus: Inci. Then, she derives from this a second, diminutive nickname, Inclein, which combines the established Inci with an echo of the German word klein, meaning small.

I carried Inci over into English directly, but that didn’t seem like a good idea with Inclein. I decided that the most important aspects to bring over into English were the link to the original nickname (Inci) and the aspect of smallness. We often create a diminutive with an -y ending in English (Johnny, Becky), but that wasn’t going to work. Sometimes we borrow -ette from French (cigarette, luncheonette), but that also seemed like a bad idea. I decided that, since I knew my priorities, I could take a risk and introduce an extra word into the line. I settled on ‘Lil’ Incy,’ which seemed to meet my two main priorities without throwing off the rhythm or changing the effect of the secondary, diminutive nickname too much. It also seemed to retain the bounciness and insouciance that characterized Dagmara’s wordplay throughout the poem.

As translators, we represent our authors in English, a language with a huge audience that our authors might not have other channels of access to. We are a broadcasting system connecting our authors to millions of potential readers. I’m very fortunate to also be friends with the poet I currently translate. We discuss many of the decisions I make —particularly the riskier ones — and I take very seriously my responsibility to convey to her the effects my choices will have on the English version of her work. I don’t want to misrepresent her or her work, and my best tool to stay aligned with her is to link my flights of imagination to the spirit of hers — when her work is playful or experimental, so is my thinking about the translation.

That expression follows us around like bad cologne. I’ve always imagined that some guy in Italy lost money one time because of a bad translation — and we’ve all been cursed ever since!

I think translation inspires violent metaphors because, as adults, we feel a failure to understand very viscerally. Languages that we don’t speak present us with a solid wall of such failure — we throw our wits at the wall, but they smack against it and slide down. This can be extremely frustrating. It can even feel like the world around us (or a language being used by others to interact with the world) is encroaching upon our mental space, the space in which we understand our surroundings and our fellow humans. Translators present themselves as our guides in these difficult spaces, a role that is necessarily fraught and difficult.

In addition to taking place in this potentially upsetting territory of incomprehension, translation itself certainly has a violent aspect: by the time we’re finished with a text, there may be not one word of the original left intact. That said, I think it’s important to remember that translators can build as much as they destroy. Every brick (or bone) that we tear out of the original text goes into a new foundation (or spine) for the translation. We re-build house for house, body for body.

Faithfulness can be so easily misunderstood and/or misplaced. When asked if his Spanish was good enough to translate Gabriel García Márquez (RIP), Gregory Rabassa famously said that the real question should be: Is my English good enough? I think that part of the wisdom in this quote is the implicit understanding that literature is made from recognizable formal techniques: metaphor, narrative, structure, rhythm, rhyme, allusion, etc. Could Rabassa find ways to make English do the things that García Márquez made Spanish do? As translators, we ought to concern ourselves with faithfulness to these key formal elements of a text, as well as the author’s intent in using them and the effect that they have on the reader.

This is a tough question! I want to say: when nothing about it bothers me anymore; when I stop feeling that some aspect of it isn’t quite right. That’s an answer that comes from the gut; it’s a sort of developed intuition.

As I mentioned before, I work with the poet I translate, so I often know that a translation is finished when neither of us can think of anything more to say to each other about it. I suppose that reflects the fact that we’ve discussed solutions to translating all the salient aspects of the poem (sound, rhythm, allusion, semantic meaning, etc), which means that I’ve covered all the bases — so the translation is complete.

I think novels are the genre most frequently translated from German into English. I only translate poetry, which is a limitation I’m happy with. I would love to translate Rilke, just to give someone else the gift that I received when I first read Duino Elegies in English. But I think Rilke’s pretty well covered. I’d also love to translate a crown of sonnets, which I think would be a fascinating challenge.

Great questions! Lots of reasons — let me make a list:

To bring wonderful poems into English for people who can’t read German.

To give Dagmara a chance to be read by people who can’t read German.

To interact with a literary culture other than my own.

To think about language differently.

To improve my own writing.

For the satisfaction of solving challenging and fascinating problems.