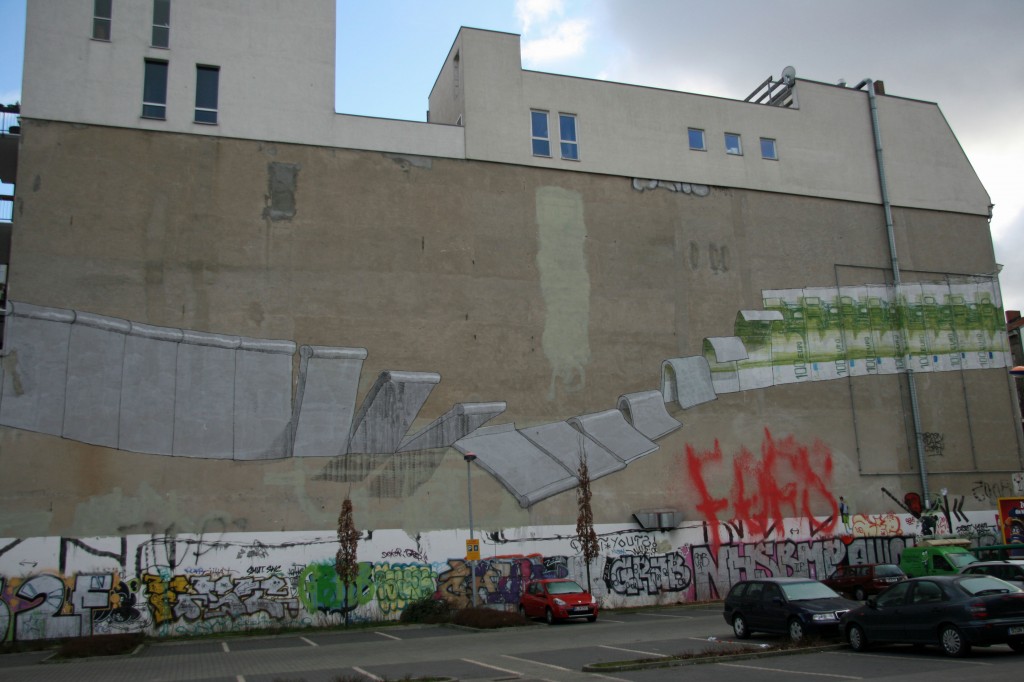 There are some forty-odd people worldwide, almost exclusively women, who identify as Objektum-Sexuals. These are people who are attracted sexually and romantically to inanimate objects, usually large buildings but also things like banisters, fences, and swords. This drives them to do things like spending all their time in a church humping a bit of it, or marrying the Eiffel Tower. But what is most interesting about Objektum-Sexuality is not the salacious element, the image of a bunch of people standing around fucking segments of the built environment. Rather, it is the fact that those who claim it as their orientation are honestly of the belief that their love-objects have souls; that they can communicate with them telepathically, and thus that their love can be both recognised and returned.

Objektum-Sexuals frequently insist that their relationships with their objects are fulfilling romantic relationships almost exactly analogous to those that can come to exist between two human beings — they provide each other with emotional support, they teach each other things, they can fall in and out of love, and they can have better or worse sex (which includes foreplay). The objects they love also tend to be gendered. The Eiffel Tower is female, whereas the Berlin Wall, for instance, is male. The community tends to be in pretty broad agreement about these sorts of things. Most Objektum-Sexuals are bisexual and polyamorous. One can be in a lesbian marriage with the Eiffel Tower while also taking the Berlin Wall as a lover, for example (with a bit of fence near a theme park ride on the side). But others might be heterosexual and monogamous.

In one documentary about the Objektum-Sexual movement, I Married the Eiffel Tower, Erika Eiffel, a woman who has indeed married the Eiffel Tower but who is also in a long-term relationship with the Berlin Wall, visits the Checkpoint Charlie Museum in Berlin and gets into an argument with the curator. The curator, a Ukrainian woman named Alexandra Hindelbrandt, is very much of the opinion that the Berlin Wall needed to be torn down. For her, the Berlin Wall was a symbol of a divided city, and of a divided world. Even more than this, it was a symbol of the oppression that the citizens of East Berlin experienced under the GDR (although on the other hand, the GDR called the Wall the “Anti-Fascist Protection Rampart,” and insofar as history is always on the side of people who call things fascist indiscriminately, who are the real oppressors, huh?).

But for Erika Eiffel, who loves the Wall, this is just another instance of the hatred and lack of understanding that the Wall has had to deal with all his life. Erika knows the Wall and she knows he is a gentle wall who never wanted to hurt anyone, who just wanted love from the people who created him, but who has been rejected by them. And he is hurting because of it. Erika empathizes with his pain, since she was rejected by those who created her too: her childhood, she says, saw her constantly passed around different foster homes, apparently because her parents simply didn’t want her.

She’s learnt a lot from “this ragged old wall,” Erika says to camera in the aftermath of the confrontation. The main thing being, she says: “Stand up.” She continues: “Who cares what people think about you, stand up and be yourself. I am standing up and being me. I am . . . the Berlin Wall. You hate me, try to tear me apart, try to bring me down, but I will still be here, standing.”

An odd lesson, all things told, to take from the Berlin Wall, which manifestly is not still standing. As much as Erika might not like it, the Berlin Wall has indeed been torn down by the people who created it, and now exists only in patches, stretches of it remaining dotted about the city as ruins. But the fact the structures they love have been destroyed or fallen into ruin does not often seem to stop Objektum-Sexuals from loving them. In another scene from I Married the Eiffel Tower, a second Objektum-Sexual visits Ground Zero, where she communes with her former lover, the Twin Towers. Meanwhile Eija-Riitta Berliner-Mauer, the founder of the Objektum-Sexual movement, who has been married to the Berlin Wall since 1979, communicates with her husband using a technique which she calls “Temporal Displacement,” imagining the Wall as it once stood at the height of its glory, 1961–1988, and “erasing all memories from outside that period,” so that she can be reunited with him.

But, looked at differently, we may not need Temporal Displacement to conceive of the Berlin Wall as still standing at all. The “tearing down” of the Berlin Wall is of course a historical event especially fraught with ideology. It was, as we know, symbolic for the collapse of Communism in Europe, and for the subsequent dissolution of the USSR, which triggered a rash of claims, most famously from Francis Fukuyama, about the “end of history,” that capitalism and liberal democracy had basically won now and everything would get better and better forever.

But the traumas of the 20th century were not simply erased by the collapse of the Iron Curtain. In many ways they are still with us, in our politics, architecture, and cultural memory. Just walk around any east-central European city, and you will see the continuing after-effects of the almost complete destruction of bourgeois life within them. The difference is that, since the end of the 1980s and the fall of the Berlin Wall in particular, this trauma has been repressed. But this is no more effective a strategy for dealing with the burden of history than repressing a similarly profound trauma would be in the life of an individual. A lot of the Berlin Wall was torn down. It no longer divides Berlin in the same way. But that is not to say that the Berlin Wall is not present to one, when one visits or otherwise inhabits Berlin.

Although no longer strictly speaking a political barrier, and certainly not a militarized one, it is hard to engage with Berlin as a city without on some level being confronted with the fact of the Wall. Even if you aren’t self-consciously following the path of the former wall, it continues to present as an obstacle to walking, travelling, or living in the city in all sorts of ways. The ongoing fact of the Wall’s existence produces strange knots in the transport network, and makes walking through the city center an often arduous task, as to stray into the Wall’s path means being met with either a building site, or a food desert.

Whilst the transport and logistical problems caused by the fact there used to be a big wall running through the center of the city are one thing, what the former site is being turned into is more of a cause for concern. The buildings that are being built along its course are not the sort of buildings that make a city for living in — they are office buildings, shopping centers, and the sort of new-build flats that serve less as homes than as what Adorno called “living-cases.” The sort of buildings that take whatever was lost to Berlin by the erection of the wall and replace it with something crappy.

But alas, whoever was in charge of this project was unable to put anything there that was in any way appealing or good. Potsdamer Platz now consists of a large shopping center (sponsored by Sony) and a bunch of big, expensive chain shops, none of which anyone would really want to make a point of visiting, and which, it seems, not that many people really do. Around Potsdamer Platz today there is just exactly the same sense of lack of purpose, as one might associate with a true No Man’s Land — the only people really there are, generally speaking, tourists who have strayed too far down Ebertstrasse from the Brandenburger Tor. Meanwhile the museums that stand round the back of it as part of the Kulturforum complex, completed contemporaneously, are frequently barren of visitors (despite the fact that many of them are actually pretty good).

Unable to produce meaning, but convincingly presenting itself as an inevitability, Potsdamer Platz is oppression as seen through capitalism in its contemporary mode. In the bourgeois era, the capitalist was a robber baron, a Mr. Burns figure. Everyone knew he was evil, but equally, he always had the risk of going bankrupt: his grip on reality, like that of a sports team that always wins, could one day realistically be ended (probably dramatically). Nowadays, the capitalist is the sort of anonymous condom of a figure exemplified by David Cameron, or the corporate personhood advocate Mitt Romney: a slickly functional member of a bureaucratic class that is gradually emancipating itself from the constraints of democracy. The neo-liberal consensus that emerged during and after the collapse of Communism in Europe represents the attempt by the capitalists to produce the conditions in which they can all be virtuous gamblers: the sort that never bet if there is a possibility they might lose. Every investment gets a return, every debt will be repaid, and the more contingencies that can be shut down, the better. This is the “freedom” that followed what has historically been understood as the fall of the Berlin Wall: the freedom to be a passive conduit for money towards these people.

So, does the Berlin Wall still exist? The Berlin Wall was, on the one hand, a real structure, the barrier between East and West Berlin. But in many ways it was more important as a symbolic barrier, a symbol of political oppression. All things considered, in this symbolic sense, we must say that it, at least in some ways, still exists. For all it stands for as a heritage site, for all the scenes of joy branded in our cultural memory, the ongoing experience of the Wall in the city of Berlin puts the lie to the Whig narrative of the Fall of Communism (and thus of “political oppression”) in Europe. It turns out that we just started to be oppressed in different ways.

Therefore, people like Erika Eiffel are not wrong to think that the Berlin Wall is still a historically real thing that they can (in some way) communicate with. But this only means that she has a much more profound duty to confront the reality of the thing that she loves. The Berlin Wall is not a put-upon, ragged old wall. It is a real geographical and political barrier that we must deal with in a serious way. When the Berlin Wall attracts people’s hate, this is not because he is the victim — he is hated for a very good reason. Clearly, he has taken Erika Eiffel and Eija-Riitta Berliner-Mauer in with his bad-boy charm. To the list of things wrong with the Berlin Wall we should thus add the fact that he is manipulative; not only does he trick innocent women into falling in love with him, but moreover, just like the devil, he has managed to fool substantial numbers of people worldwide into believing that he doesn’t — at least not any more — exist.

Tom Whyman is a writer and academic philosopher from the UK.

Manifesto for a Left-Wing Meme