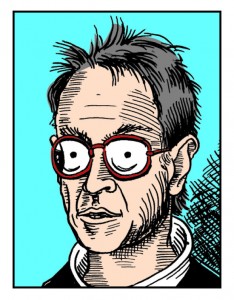 Vegetarianism, artistic experimentation, gender and racial equality, sexual freedom, a principled aversion to sanctioned forms of productivity and respectability; who wouldn’t want to be a bohemian with a set of markers like these? In Bohemians, a graphic study of bohemianism from roughly the Paris Commune to 1950s America, we see the signal contributions of subversives and radicals in making our world a more just and interesting place. The book is impressive in its scope, covering the transatlantic networks of poets, photographers, dancers, musicians, and artists of everyday life that helped shape the cultural landscape of places like Paris and New York City in decisive ways. It’s also impressive in the range of styles chosen to represent these figures and movements, from Rebecca Migdal’s history of The Masses, which grabs directly from the visual template set by the early 20th century socialist magazine, to Lance Tooks’ mixed media chapter on Katherine Mary Dunham and Pearl Eileen Primus, two “revolutionaries of 20th century dance.”

Paul Buhle (along with his co-editor David Berger) deserves a lot of credit for managing such an ambitious project. Bohemians is the most recent addition to a long career in radical comics and history, which includes Wobblies! A Graphic History of the Industrial Workers of the World and the seminal Marxism in the United States. I caught up with Paul over email following Bohemians‘ NYC launch at the CUNY’s Gotham Center for New York History, a fitting venue for a city whose story cannot be told without reference to hotbeds of bohemianism like Greenwich Village and Harlem. We discussed the kind of fidelity a graphic artist has to their material, radicalisms old and new, and the path that leads a young boy from Willie Mays and Mad Comics to Martin Luther King and Lenny Bruce.

Michael Schapira: At the NYC launch event you made a comment to the effect that, beyond being a contribution to illustrated history, Bohemians is a significant piece of historical work in its own right. Can you elaborate a little more on what you take this contribution to be? Was this a surprising outcome when compared to what you expected at the beginning of the project?

Paul Buhle: I always expect “my” artists to make their own interpretation, in the sense that art changes the narrative, even if a complete script is provided beforehand. In most cases, artists adapt a script freely, paying attention to historical accuracy but working out much conceptually as they go along. (In some cases, artists also do their own research and, apart from the topic, keep the editor at arms’ length! Our editorial ego suffers in this case, but not much.) I would say that the depth of understanding, e.g., in Lance Tooks’ piece on Pearl Primus and Katherine Dunham, is stunning: I was stunned at the work. Trina Robbins’ script for “Les Salons de Paris” is erudite. But Dan Steffan’s “Frowning Prophet,” scripted entirely by himself, is as intensely developed as a scholarly journal article. Each of these examples has its own integrity and none stands above the others.

Many of the contributors have worked from existing texts in the past — e.g. illustrating Kafka or Studs Turkel (Kafka, who famously demanded that no illustration appear on the cover of The Metamorphosis). When you are illustrating from an existing text how do you tend to approach your work? Is it a form of translation where the integrity of the initial text has to be respected, or are you thinking that you are going to be creating something radically new that is in dialogue with the original text?

I am the editor or impresario, not the artist, and shy about speaking for them. But you have put your finger on the task by suggesting that integrity must be retained. Then again, RETAINING integrity while seeking to explore the visual implications, is the task at hand. The result is certainly something new. Perhaps we can see this most easily in Sabrina Jones’ renditions of Walt Whitman’s lines of poetry. They add new dimensions without taking anything away. Whitman’s New York is Jones’ New York.

Do you think that, at this moment, a history of bohemians speaks more to the hope of the young or the nostalgia of the old (e.g. the post-’68 generation)?

There’s an element of bohemianism that speaks to a sense of political futility or at least extreme difficulty of anything like political change. That’s where we are now. The generations immediately after 1968 were perhaps (in my classroom experience) more resentful than nostalgic: they missed all the fun and wanted someone to blame. Nostalgia set in later, but I am not at all sure this can be seen as nostalgia for 1960s Counter-culture. Bohemianism occupies a different space.

If you had to isolate a set of core values for bohemians across the period covered in the book, what would you point to? Or, conversely, did you come away from the project with a new respect for the diversity of different bohemian groups?

This is a key question and one almost impossible to answer with any sense of finality. The desire to elevate art, the making of art, above career, money, etc., and the desire to live apart from existing standards of behavior, sexual morality, etc. — these were there, among the Parisian bohemians, in the 1850s. We face a somewhat different situation when “existing standards” fall away, but on the economic or career side, not much has changed. The greatest change is as you suggest: demographic diversity, to which I would add globalization and communication. But women artists and nonwhite artists, after all, face the same (and further) restraints, also the same (if lesser) opportunities plunging some, in each generation, onto the bohemian path.

How did you commission the individual pieces? You have the musician Jeffrey Lewis illustrating the chapter on Woody Guthrie. Did you try to look for these affinities, did the illustrators themselves approach you with their interests, or did you assign some based on other qualities like the style of the illustrator?

The answer here is that there is no single answer. I began publishing a radical history magazine in 1967, when I was not quite 23, with few resources but with a social movement (Students for a Democratic Society) to reach, if I could. Radical America was noted for its poetry and art, and I went looking for poets and artists. All these years later, I try to match artists with topics. But I have the advantage, clear already in Wobblies! (2005) that I could draw on two particular milieu: the remnants of the Underground Comix world (most notably my late friend Spain Rodriguez) and its “Alt” successors; and the circles around World War 3 Illustrated, the magazine that has been a gathering place for mostly young artists, since its inception in 1979. There are other artists, who I’ve found through contacts, and all this takes effort. But I enjoy the effort.

When, in your training as a historian, did you become interested in the form of doing history? Was your interest in illustration something that you carried with you into your work as a historian, or did it emerge as a reaction to the way that history is normally done?

I had an eighth grade history teacher, my first African-American teacher (and my last, one might say, until I became a sort of disciple of CLR James, whose life I hope to put into comic form, with Milton Knight as artist, pretty soon), and there, in 1957, I fell for history. I’d wanted at about the same time to write Science Fiction. But I was also deeply involved, mentally, in Mad Comics, which had shortly before come to a close (and re-emerged as Mad Magazine, a less intense project aimed at younger ages). Harvey Kurtzman’s attention to detail including historical detail had a strong effect on me. Later, starting Radical America, I was also thinking about ORAL HISTORY, the fieldwork gathering stories from oldtimers, and that, too, has greatly shaped my work, how I think history can be told. Last, I was always interested in reaching an audience beyond the university, and comics are my way, if they are successful, in reaching young people who are stirred or can be stirred by challenging, radical ideas but find too little of what they want in other places.

Your co-editor, David Berger, said that for him the biggest achievement of the work was to highlight the contributions of African-American bohemians. Was this a surprising outcome, or something that was self-consciously part of the project from the beginning?

I had been looking, from the beginning of my comics work, for African American artists, and having poor luck in matching artist to project. Lance Tooks and Milton Knight had collaborated with, had known, the World War 3 people; we “met” Afua Richardson on the web, looking up her work. I’m amazed at how resonant the resulting work in Bohemians is, and how far it goes to define the project as a whole. David pushed hard, wrote several scripts (all of them heavily adapted by the artists) and deserves great credit. Modern Dance, for instance, was a mystery to me.

Many subjects in the book, like Walt Whitman with his notebooks, worked in public. Some of the illustrators talked about carrying their sketchbooks around and working on the subway. Do you think that the public character of their art or politics or fashion is a central part of the history of bohemians?

The very nature of Ash Can Art as it evolved in the 1910s, came from newspaper illustration work, as the leading scholar of the field, Rebecca Zurier (a good friend), has detailed in several books. Several of the WW3 artists have remarked, from time to time, how the example of the Masses magazine, where the Ashcan artists’ work appeared to a wide audience, continues to be important for them. So: you’ve hit a key point. These artists are in their studios but also in the street, when something happens, for instance protests against Gentrification’s effects on poor people’s housing, or against some attack on ecology, or against the latest war, they are themselves part of the scene. When they work in the present and gather stories, as they do sometimes, they seem very much like my own work in oral history.

Was it Mad Magazine and the underground and alternative media of the 1960s that got you interested in illustration? And if so which were your favorite publications and illustrators?

You’ve come close to my heart or home base. At age nine, my great heroes were Willie Mays (of the New York Giants) and Harvey Kurtzman of Mad (at fifteen, they were Martin Luther King and Lenny Bruce). It is impossible to summarize what Harvey, but also his key artists Wally Wood and Willie Elder — not to forget Jack Davis and John Severin among others — meant to me reading the little Ballantine reprints “best of” Mad Comics paperbacks. I read these books hundreds of times. And learned what I later called the “immanent critique of popular culture,” that is, getting inside the phenomenon, looking at the discrepancies that are more than hypocritical. Kurtzman was taking apart postwar consumerism and the military-industrial society conceptually.

Nothing ever came up to Mad Comics’ level of satire and comic art, at least not until I received Feds ‘n Heads, Gilbert Shelton’s first little booklet, sent up from Texas; and until I began to see “Underground Comix” in the back pages of Underground newspapers. I went from there.

Michael Schapira is the Interviews Editor for Full Stop.