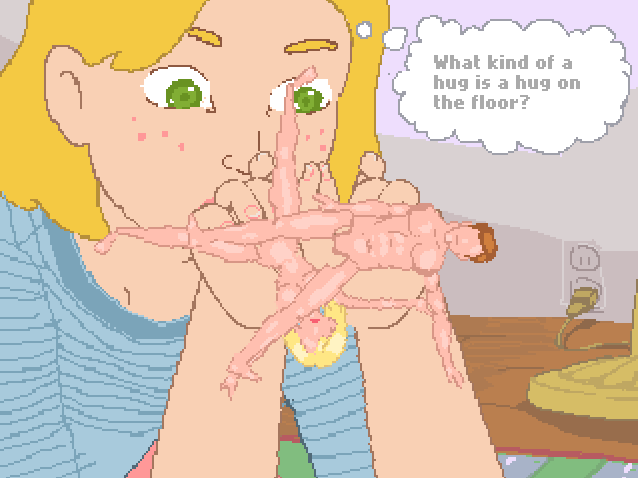 This is what it feels like to be a man being a little girl learning about sex. Your mom leaves the house and you are alone with your dolls. As if through a glass, you watch yourself bang the dolls together, desperate and fast, because in the clacking of Barbie flesh-on-flesh you will discover How Do You Do It. (“What kind of hug is a hug on the floor?”) The game is not Mom-approved, and when she opens the door, you stop. Yet the game is outside your control. You are inventing plastic sex, approximating Titanic or your parents’ bedroom. The game seems to be something that you do to the doll. But it is actually something that is happening to you, the little girl avatar inhabited by an adult. A video game is the medium best suited to express such an illusion of agency, the exercise of power within a tightening radius of possibility.

In Nina Freeman’s work, the video game has become a lyric poem and an occasion for performance. Her games express her personal memories and demand that we act them out. Film short meets Internet arcade. As we replay adolescence in pixels, Freeman’s games challenge us to revisit the moments that create social identity: sexual discovery in How Do You Do It; shopping for clothes in Ladylike; hording snacks in My House My Rules; pillow talk in Perishable. Their rules, limiting to the point of absurdity, simulate the cultural expectations that constrain those identities. But by clicking in the box and starting the game, we gain a new space for testing the links between childhood sexuality, technology, and gender.

As an undergrad at Pace University, Freeman switched from a theater major to English after working with the poet Charles North. Inspired by friends who studied game design and her lifelong interest in gaming, Freeman took a job in the School of Computer Science, started hanging out with programmers, and went to conferences and game jams. When she graduated, the dean of the School helped her find at job at the Department of Education, where she taught herself Python and began to meet other designers like Emmett Butler and Diego Garcia. “They were working on Heads Up! Hot Dogs . . . I was like this is real, they’re actually making it, it’s not like magical,” Freeman said. “Watching them make the game, just the two of them, made me think I could do this.” 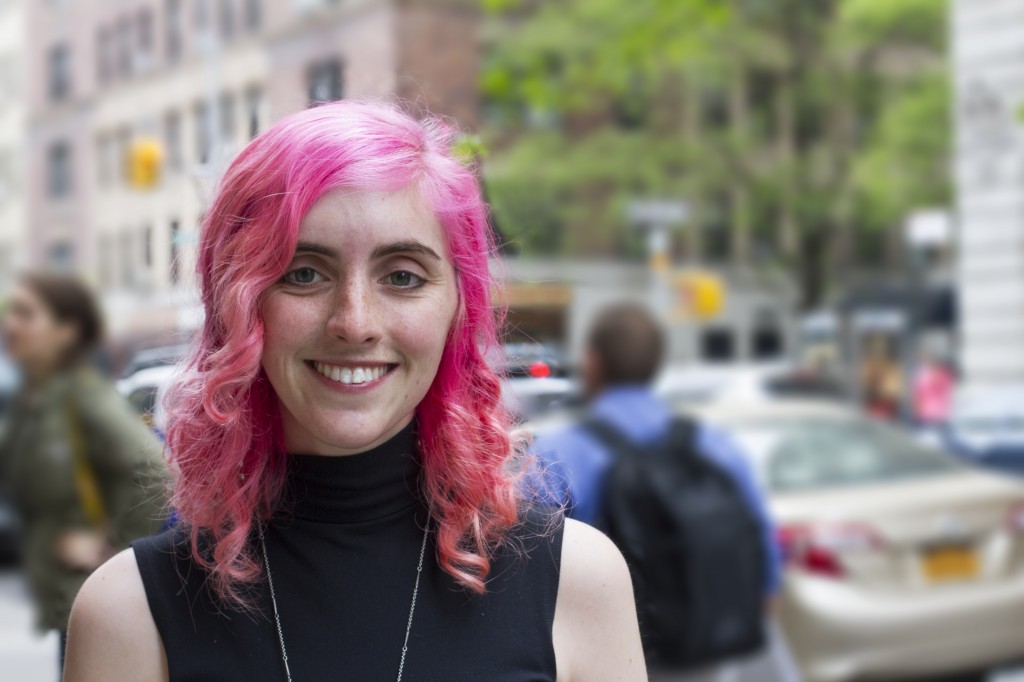 Although she enrolled in a masters program in computer science, a chronic illness (which inspired her game Mangia) prevented her from completing the degree. While she recuperated, Freeman continued to learn code and met Phoenix Perry. With Perry and three other women, Freeman co-founded Code Liberation, a group that offers women free coding classes in order to even the ratio of women-to-men in video game design. Encouraged by her co-founders to keep building games, Freeman created My House My Rules and Ladylike between 2012 and early 2013. Now with ten games finished and more on the way, Freeman has established herself as a major advocate for ‘women-in-tech’ and as an avant-garde game designer.

“My game design process is directly connected to how I write poetry,” Freeman said. “Because of my poetry background, I feel strongly about small moments.”

Working from her childhood memories, she develops a series of images into a poem, and then translates the text into a game with defined rules and a narrative. To illustrate the game, she collaborates with artists like Jonathan Kittaka (How Do You Do It) and Winnie Song (Ladylike). She calls work like How Do You Do It and Ladylike “portrait” or “vignette” games. “I tie together my personal memories with my ideas about femininity by trying to use tech to paint these portraits that give players a visceral experience of what it was like to have been me or another child, a girl, to give a glimpse into these small moments.”

Ladylike is a short adventure game composed from Freeman’s small moments. The first moment takes place in the back of a car, a girl playing a video game, her mom talking at her from the front seat. The conversation begins, “I don’t want you two being friends — the girl is bad news.” You choose to respond, “I know,” or “That’s not fair mom, she’s my best friend!” If you choose the latter, she says, “All you two do together is eat pizza and ice cream. You’re going to gain weight.” One scrap of dialogue is sewn to the next, almost, the causal logic connecting your statement and hers frayed to a weak, suggestive thread. And though there is still a sense that your choice of dialogue exerts some influence over where your mom takes you, the outcome is random and you are almost powerless — because the problem remains, does it matter what you say (or do) if your speech or actions do not affect the world? 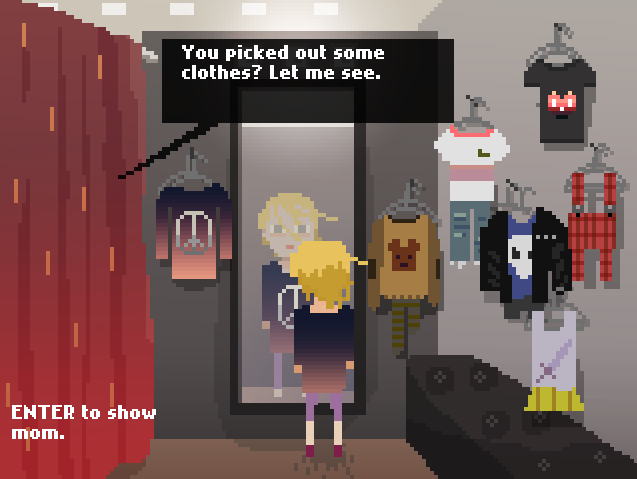 Another destination is the grocery store. “Mom wants some eggs,” but you will trip and smash them. “You need to be more careful. I’m sending you back to gymnastics to practice your balance.” END.

Another destination is the food court, where an acne-splotched boy asks, “Hey, wanna play cootie catcher?” Choose 1, 2, 3, or 4, choose purple, red, blue, or green, choose orange, yellow, black, or pink, and your fortune is, “You will be an old cat lady,” or “You are fat.” The boy says bye, in the car, your mom asks, “Who was that? A new friend?” END.

Another destination is the toy store. You pick a doll and take off its clothes, scrutinizing its naked, Barbie body. You can put the doll down, but every time you try to pick a new toy it will be the same naked doll. Dinosaurs and robots and action figures are on a higher shelf that you can’t reach. All you can do is pace your pixelated little girl body from one end of the screen to the other, frantically picking up dolls until a secret timer runs out and the screen cuts to an intertitle, “I wish you would stop cutting the hair off your Barbies. They’re so expensive.” In the car, your mom says, “Why don’t you want Baywatch Barbie? She’s the prettiest.” END.

Freeman’s games are, in her words, “unexplored terrain,” both because they are so intensely personal and because their mechanics defy assumptions about how games ought to be played. Yet her games take place in the most banal, familiar, and over-explored places, the domestic and suburban interiors familiar to so many players. “My games are about small spaces or claustrophobic in some way,” Freeman said. “My mom is in almost all of my games, and I didn’t mean for that to happen. That probably has something to do with the way I grew up, I grew up in an apartment for the first 10, 12 years of my life. So I grew up in this small space.” Like Freeman’s game mechanics, her settings are bounded, mobility impossible, the imagined world, static. The game experience resembles anesthesia awareness. A horrible thing is being done to you, the passive object. 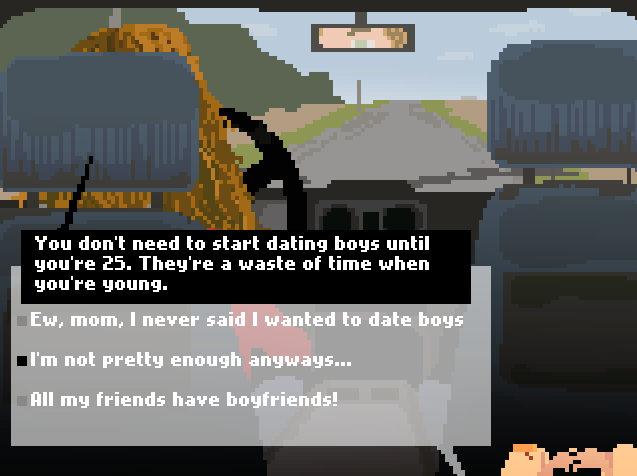 But if Freeman’s games reveal how our culture restricts girls as they seek independent and original identities, they also suggest that poetry and gaming are paths to self-determination. Yes, by taking as their themes the games that constitute childhood, Freeman’s portrait or vignettes scrutinize the link between a culture and the emergence of psychic life. And yes, because of their unusual formal elements, How Do You Do It and Ladylike imply that sexual identity both resembles a video game and is constructed, at least in part, by gaming. Like all truly subversive art, however, Freeman’s work contests its own substance, confronting the usefulness and durability of “girlhood as a game” through the game medium itself. “But Mom, I really like video games,“ you say. “It’s just not . . . ladylike.” Video gaming is a poetic form that can supersede the many other games that make up girlhood.