Parties I Have Heard… Of 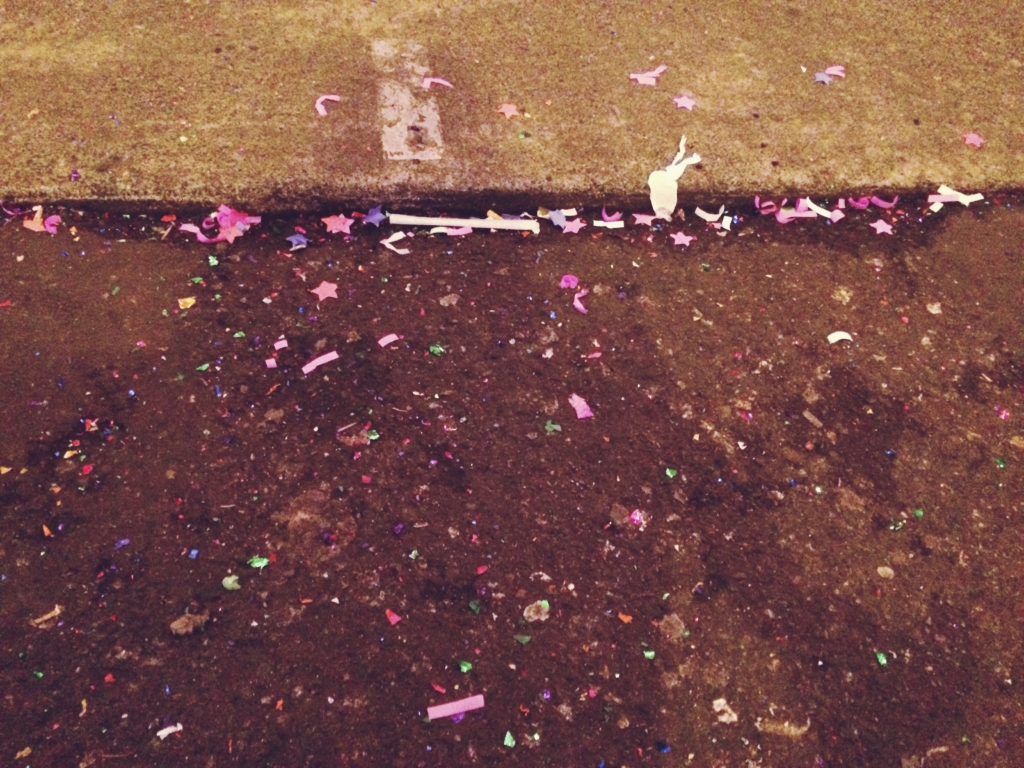 I have recently realized that if I had to choose one and one-only sentence to encapsulate my personality, it would be: “a person for whom dancing parties are a matter of the utmost importance.”

Ineluctable consequence of a passion of the like — other than various kinds of foot-tapping, head-nodding and shoulder-twisting over the tunes playing in the background of routine supermarket shopping — is a generalized anxiety of missing-out and being cheated out of some fun I wasn’t invited to take part in.

About a year and a half ago, I moved to London from Cairo, where finding a community of sympathetic people to party with had been much easier than expected. This was probably due to the combination of several factors, among them the bizarrely privileged position I occupied within Egyptian society. London, instead, is still a land of isolation for me. Chance encounters are not as lucky as I wish and I have yet to find a crew, a scene, a band with whom to try out new wild combinations. In the meantime, I have started conflating the longing for a community I miss (in Cairo) with fantasies of ghostly communities I have simply heard of.

This post is a review of three very different instances of parties that I could not attend, due to their inconvenient spatial or temporal location. Hence, it is populated with fantasies and I dedicate it to others, especially those living in the ungenerous city of London, who still haven’t found their dancing community.

Finally, this will be a post about nostalgia in the most literal sense and irremediably so.

I eschew patinated longing for a past that never quite existed for its fundamentally reactionary character. Nonetheless, I find myself daydreaming of glorious parties and cheeky events that my mind tightly wraps in an endearing vintage aura. In the end, I have decided to forge ahead to see whether the action of writing up this collection of parties could cure my anxieties and kill my reactionary malaise.

The first party I missed took place in New York in the 1990s in a context often-fetishized as the home of authentic fun.

Bernadette Van-Huy met Michael Alig in 1994. She was 23 and he was the king of New York’s nightlife and of its Club Kids. Together with life-long buddy James St. James, Alig was throwing parties in authorized and un-authorized venues. His were among the first impromptu raves in subway stations and dismissed warehouses.

New in town, Bernadette was invited to organize parties in the VIP room of Club USA. She gathered some of her closer friends in the scene and decided to call the party series “Boring.” — it later changed to “Fun” after Club USA’s owner Peter Gatien vetoed it. At about the same time, the collective of organizers took on the name Bernadette Corporation.

This lasted for a summer. Then the Corporation was fired. Michael Alig’s drug addiction spiraled out of control and his fame is now mainly associated with the murder of Club Kid and dealer Angel Melendez. Bernadette Corporation, instead, went on to become first a fashion brand, then a publishing enterprise, a collaborative writing project recycled as activist unit and, more generally speaking, one of the most influential artist collectives worldwide.

In the beginning though, there were the parties: excessive costumes, psychedelic make-up, euphoric glamour and a sort of parallel dressed-up universe where characters of all sorts would spread pixie dust all over club-land.

Party organizing goes hand-in-hand with art communities. This is a fact, and it leads me to a second less-wild instance of parties, shimmering with a very different kind of glamour, but glamorous nonetheless.

Nile Sunset Annex is a one-room exhibition space in the apartment of two of my dearest artist friends in Cairo, Hady Aboukamar and Taha Belal, that together with another very dear artist friend, Jenifer Evans, run the gallery with an amazing monthly program. A few summers ago, Jenifer and Hady showed their work together on the rooftop of Hady’s apartment building for one night. The show was at dusk and the roof, which looks over the river, was renamed Nile Sunset Gallery. The room downstairs is the natural annex of that first impermanent space.

Back in the winter, the three artists turned the gallery into an art bar. They wallpapered it with posters and flyers of exhibitions that have taken place in Egypt in the last decade and served special cocktails in their de-facto speak-easy. Stuck in cloudy London, I never could go and followed the events from afar, browsing images of fun chats and cheeky drinks.

Curse of the contemporary nostalgic, online social networks operate as nostalgia amplifiers. News feeds that help you keep up with the lives of people you no longer know remind you also of the friends’ life milestones you missed, the cities you no longer live in. The ephemeral mythologizing of localized communities that online network mediation constructs makes you feel like you are missing out on both the event and the memories people have of it. It is an endless series of Chinese boxes of nostalgia, hiding one inside the other, that the party-lover cannot tolerate.

In those photos, I would see familiar faces of the edgy Cairo-crew, slightly dressed-up, sipping drinks and hanging out around wooden tables specially built for the occasion. The quality of the light (and probably also the knowledge of the unravelling socio-political context in the streets right outside the building) infuses the room with the feeling of underground resistance and freedom.

That selection of pictures reminded me of another set of images, that Ekaterina Degot showed during a conference I went to with my usual high hopes for random encounters with like-minded lonely-art-hearts. Degot was talking about Apt-Art, the Trekhprudni Squat and non-conformist art in 1980s Russia.

Also her photos were a collection of apartments turned into show spaces, with cupboards used for exhibition display and art-projects crowding living-room floors. By the end of her presentation, Degot pointed out that the Russian non-conformists, as well as all Russian artists, were taken care of, socially and economically speaking, by the Soviet government. What they were lacking was context and cultural nourishment.

They missed a crew, an experimental scene. With institutional art clogging up all available space, any experiment had to literally hide in the snippets left un-watched: the interiors of private houses.

“We are now in the situation, which is the other way around. We (and by “we” I guess she meant radical educated individuals somewhat interested in visual cultures) might be socially not taken care of, but culturally we feel that we are somehow the mainstream. It might happen that we’ll be abandoned also culturally and we’ll have to completely reinvent exhibition-making,” as well as strategies to assemble a milieu.

Right after Degot was finished, I saw her words taking two imaginary directions: one towards Cairo — with its art communities, the support they lack and their overcompensating aggregating energies — and one straight back to me, the little island in the giant town I can’t afford to travel across, attending yet another conference and failing once again to meet anybody. More than a prophecy, Degot’s was the description of an ongoing process, at least the one I am undergoing.

Talking about communities on the brink of losing something, if not everything, leads me to the third and final instance.

This happened last year, when I was still living in Peckham, one of the many London neighborhoods that gentrification processes have been transforming at breakneck speed. I was a student and I moved into a flat above a barber shop because the rent was relatively cheap. My downstairs neighbors were a bit younger than me and most of them had recently emigrated to London from Nigeria.

The guys loved hosting parties and those must have been good parties, but they unfortunately took place during weeknights or, really, whenever I needed to study the most. Over those 12 months, the paper-thin ceiling dividing their tiny store front from my bedroom assumed a number of unexpected symbolisms. The papery quality of the separation guaranteed that we’d feel as though we were all living together in one big room (and we probably were, if we went by the original design of the flat), split in two by my floor/their ceiling. What we never got quite right was a proper schedule coordination: what time to wake up and what time to go to bed — hence, the great banging of feet on the floor, from my side, and hitting the ceiling with a broom, from their side. I am still amazed by how much of our relationship was noise-based, with the shared ceiling-membrane as favorite common instrument.

Clearly, that extreme physical proximity couldn’t cut through other kinds of separation that none of us, neither me nor them, was really strong enough to fight against. We were too close and couldn’t be more far apart. There we were, the gentrifier (soon to be gentrified — my house in Peckham became unaffordable for my wage and I moved out last Fall) and the gentrified, caught in the midst of and briefly held together by much larger systemic forces, sharing similar anxieties and the same noisy-banging surface. The soundtrack of our love-hate story goes like “clowns to the left of me, jokers to the right, here I am, stuck in the middle with you.”

My neighbors and I saw each other almost every day. We were friendly and would make jokes about our turbulent nights of sound-fights. I could never quite match their faces with the voices I would hear from my room and so I think I met them twice: first face-to-face and then sound-to-sound. A part of me was annoyed. Another part of me was feeling guilty and worried for an ominous destiny foreshadowed by the ghostly character of those voices. The last part of me was just excited by that strange cohabitation and possessed by the up-beat rhythm constantly populating my routine.