Every Day Is for the Thief – Teju Cole 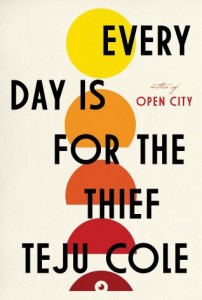 Teju Cole is a writer who lives on the Internet. He gives of himself to Twitter.  Although his 2011 US debut Open City won the PEN/Hemingway and got James Wood all excited, I first encountered Cole’s lyrical prose on social media.  140 is enough characters for a good writer to do good writing, whether he’s stretching an essay across many multiple Tweets or just joking about how social media works, like the rest of us:

As much as I like reading Cole online, the experience of reading his work in a big chunk is sharper and feels more complete.  Cole’s writing invites you into a fully realized world; at a longer length, his writing is immersive.

Every Day is for the Thief was published in Nigeria in 2007 but never had US distribution until now, which gives the book the strange distinction of simultaneously being both his first and second book to American audiences.  Like Open City, Every Day is for the Thief features a male narrator walking around a city.  While Open City takes on New York, Every Day finds an unnamed narrator returning to his native Lagos, Nigeria after more than a decade away.  Every Day reads like a study for Open City, or a spiritual twin, or a backwards reflection.

From the moment he steps off the airplane in Lagos, Cole’s narrator encounters the corruption that covers every interaction in Lagos like a translucent skin.  The longer the narrator stays in Lagos, the thicker and more complex the skin gets, until the reader can see that corruption is not actually a skin, a removable layer, but a part of the body, mixed in with the flesh, organs, and bones.

The narrator feels the loss of a remembered Lagos, and Cole renders the Lagos around the narrator so richly that the book simultaneously takes as its subject the city and the loss of the city.  Marketed as a novel, Every Day comes off as surreal travelogue.

Towards the middle of the novel, Cole shifts the book’s subject to the search for art in a corrupt culture, which is where Every Day really finds its legs.  The narrator’s palpable frustration at not being able to write amidst the frequent power outages and the ever-present hum of backup generators gives the reader the best sense of the man at the center of the novel, who otherwise recedes to relate the stories of either the city or of a few of its inhabitants.  Cole deepens his central character a bit too late in the text, giving the narrator a bit of a half-there feel which I think ultimately steps all over his ability to fully convey Lagos.  Once the narrator solidifies the various corruptions and complications he experiences in Nigeria gain a more visceral feel.

My only other objection to Every Day is for the Thief is technical.  Like in Open City, Cole renders his dialogue completely without tags, which while clearly a style choice Cole favors, is a pet peeve of mine.

With Cole, though, everything comes back to the prose.  When it comes to the language he uses to give shape to his stories, there’s nothing I can say against Cole.  If he wrote it, I’d read the entire phone book.