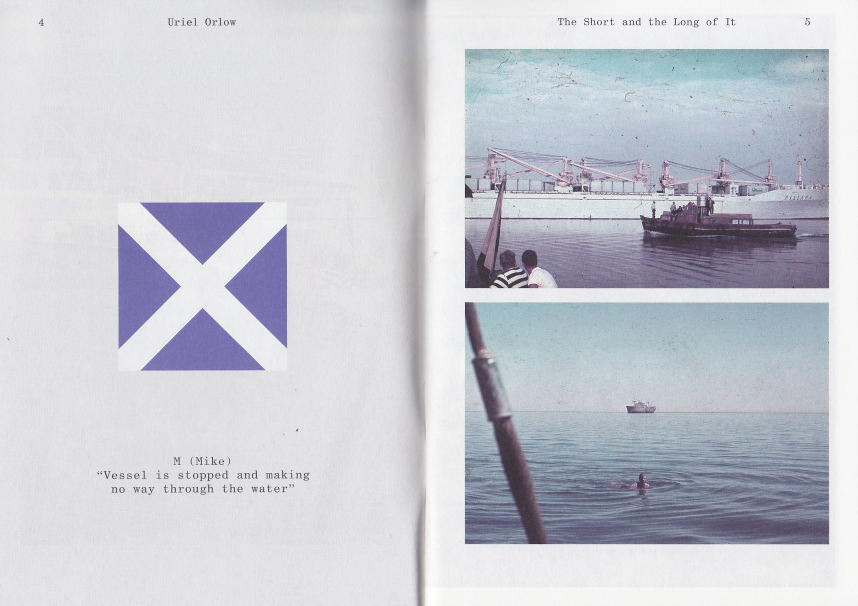 From “The Short and the Long of It,” a project by Uriel Orlow

Historical pockets and blind spots hide exceptional events, ignored by official records. Their odd temporalities, slowing down or accelerating the velocity of history, are inexhaustible sources of inspiration for writers and nostalgics and anyone prone to the seduction of ahistorical oddity. When they unfold, these lost pockets supply fascinations and fuel sometimes-indulgent writing that this post is here to embrace and contribute to, rather than critique for once, because in the end there isn’t anything really wrong with indulgent writing.

A few years ago, I found a rather un-known and definitely under-reported Olympic competition: the 1968 Great Bitter Lake Games, complementing the far more celebrated Mexico City Olympics, and taking place at about the same time.

I first came across the Great Bitter Lake summer games in a photograph: a group of fit young men, dressed in amateur uniforms, playing soccer on a ship deck on a sunny day. One fellow sailor, sitting on a wall at the edge of the field, has taken his shirt off and watches the game while tanning. The field ground is the wooden floor of the deck, but the setting is as professional as it gets with soccer, at least on board a ship. Indeed, there is a proper goal in the back of the photo.

The picture, part of Uriel Orlow’s work Waterlocked (2010), was on the front-page of the catalogue of a much larger project by Orlow, The Short and the Long of It, displayed in several iterations. Other than being a compelling work of art, The Short and the Long of It is possibly the best documentation of a rather peculiar instance that took place between 1967 and 1975 in the Suez Canal, when, via the canal’s capillary system of lakes, fifteen vessels from around the planet along with their mostly politically-unaware crews got caught up in regional geopolitics and a war meant to last a few days that instead continues to bloat in time until today. 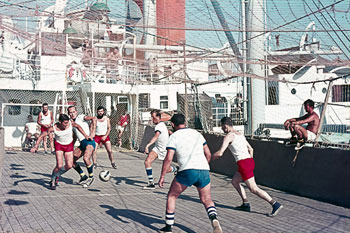 From “Waterlocked” a project by Uriel Orlow

A bit of more cohesive background: in 1967, a fleet of fifteen ships flying under the flags of several different countries was crossing the Suez Canal northbound when the Six Days War between Egypt and Israel broke out. Both ends of one of the busiest sea passages in the world were shut. The vessels remained trapped in the contended land (or water, rather) that the Egyptian authorities would not re-open until 1975. Fourteen of them anchored in the deepest part of the canal, the Great Bitter Lake, and simply waited there. For eight years.

Soon after the beginning of the conflict, the officers aboard the vessels decided to federate in the Great Bitter Lake Association to guarantee mutual support. This was just the beginning of a nascent micro-social system that remained spatially and temporally contained. The ships organized so as to have dedicated common areas for various activities, from religious ceremonies to a yachting club. They had a system of hand-designed stamps to send mail out from their non-sovereign, amorphous region via Egypt. The philatelic market, which deals with these oddly shaped colorful stamps as invaluable collection pieces, is one of the main sources of information on the story of the fleet. As time passed, crew numbers could be reduced and the sailors organized in rotating shifts.

Among other amusing activities, the sailors organized a parallel version of the 1968 Olympic Games, a much quieter and more DIY edition in comparison to what was taking place in Mexico City, but definitely including more than just soccer matches. Sailors competed in events such as tennis, live-boat regatta races, acrobatic jumping, and fishing.

The stories of these men and the odd circumstances of their Olympic games occupy a queer temporality and a space of fascination in my mind. I have started associating the case of the stranded fleet with diagrammatic lines, circles and flows moving across the region (and the planet) with altered speeds and intricate trajectories. These, with more time passing, have then reconverted into a series of images, two of which I am particularly fond of: one resembles the eye of a storm and the other looks a lot like yawning sunny summers in the countryside.

If we were to adjust our field of vision on the region of the canal during the time span of those eight years, we would probably appreciate the relative quiet of that in-between space, at least in comparison to its surroundings. The Six Days War is one of the most symbolic and speculated-upon conflicts in the Middle East, profusely deployed in service to nationalistic discourses. While the confrontation was taking place and during its lengthy aftermath — including another major conflict in 1973 — the eye of the storm was static, almost immobile. The Great Bitter Lake was in stagnant wait. Or rather, it was enjoying relatively nice weather due to lower barometric pressure, figuratively speaking. It was not hermetically separated from the thunder by a towering eye wall. It was safe enough. From the prospective of the games, the Great Bitter Lake summer edition reverted the intentions of the mythical Olympic truce. Instead of promoters of peace, supposedly emanating from center to periphery in the name of athletic passion, the lake and its inhabitants were more of a slim bubble of apparent peace in the midst of relentless international conflict, branching way beyond the region.

The second odd temporality that comes to my mind is one that slows down to a point of complete stillness. It freezes into an image that has little to do with political conflicts and stranded sailors, or maybe it has to do with them both but only in relation to their capacity to induce boredom. Perhaps, it has more to do with playing soccer on a ship deck just to pass time — and with my personal Olympic summers when I was a child.

The re-staging of the Olympic games (or the Soccer World Cup or European Cup for that matter) was perhaps the undisputed highlight of an otherwise uneventful summer for my neighbors and me. Every iteration was carefully organized, and in each I would embrace my destiny as a young woman, bound to become either the best soccer player in the world or the rising star of freestyle swimming or acrobatics, according to the whims of the summer. The games were fueled by a powerful combination of the need to stretch out and run around, and a feisty competitive spirit. They were a mix of honest fun and mild self-importance. The difference between usual play and staging an Olympic Games was found in the intentions and the seriousness of our commitment. It wasn’t playing, it was the Olympics — a way to make things feel real.

The first time I read about the stranded vessels and their Olympic competition, what struck me was not the need to organize an amusing week of sports to kill the time, but to carry it on as Olympics and name it accordingly. Why bother doing that? And why do it in the middle of nowhere where nobody can see you?

Perhaps pretending to be serious and official when things are anything but official has a naturally transformative capacity. An attitude of seriousness comes attached to aloof boredom and ponderous austerity, but functions as a cure for these passive affects. It sharpens diffused and loose aims and makes them pointy and concrete, turning boredom into intent activity. It may add a trajectory, encapsulated in a bubble of amorphous time, but not in order to straighten it up or pop it from within, just to make it more complex and alter its temporality again and again.

Introduction to the Diaries of Waguih Ghali