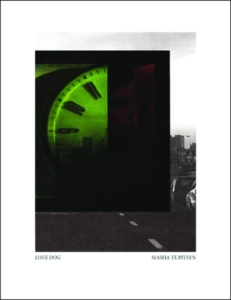 Masha Tupitsyn’s Love Dog, written on Tumblr and commissioned as a book published by Penny-Ante is the second in a trilogy of ‘immaterial writing’, following 2011’s Laconia: 1,200 Tweets on Film published by Zero Books.  Love Dog is movie criticism, autobiography and philosophy. It is not-fiction. It tells stories both about and through media. Tupitsyn calls it ‘Polyphonic’ and asks that we both watch and listen as well as read.

Tupitsyn embraces social media, in this case, Tumblr as a platform for first-person narrative in the feminist traditions of diary and letter writing that allow the life-lived to become a means for transformative thinking and writing. In Tupitsyn’s procedural rubric it is the interface that determines the form so, where Laconia used aphorisms to work with the limitations of Twitter, composed on Tumblr, Love Dog is not only diaristic, episodic and fragmentary but also multi-media, networked and written ‘live’ before an audience.  Many of the posts which make up the text of Love Dog consist of single quotations, links to videos, embedded jpegs of mobile phone photographs or movie dialogue — others are full length multi-media essays. A post dated 06 06 2012 and titled ‘Beyond S&M’ simply quotes Kathy Acker’s Don Quixote, “What I wanted here was love. What I wanted most, even as I’m dying is love…I would have this love which is neither control or being controlled.” Another post discusses Sophia Coppola’s 2010 film Somewhere including a YouTube link to a trailer and quotes from the comments on the link as well a critical discussion of Slavov Zizek and Alain Badiou’s theories of drive and desire, love and sex. High theory and pop culture, stories of women and love and movies, subjects with which Tupitsyn has concerned herself since her first book Beauty Talk and Monsters was published by Semiotext(e) Native Agents in 2007, are woven through the posts.

Masha Tupitsyn is perhaps a key figure in a cohort of writers informed by the performative philosophy of Chris Kraus, Kathy Acker and Cookie Mueller and nurtured by Kraus’ Native Agents Imprint.  Inspired by Acker’s Don Quixote and by Roland Barthes’ Lovers’ Discourse, Tupitsyn’s intention is to re-imagine “the wound-and-quest story, the love narrative, and the female subject in love in the digital age.“ She is in a good position to do so, having apparently been reading Acker since her theorist father, himself quoted in Love Dog, bought her one of Acker’s books from St. Marks Bookshop when she was fourteen years old. In a very real sense she is ‘native’ to these forms of thinking.  This heritage is always referred to by Tupitsyn with joy and gratitude though I do wonder if it conferred it’s own burden. One might speculate that Tupitsyn’s obviously intensely felt need to do justice to both her inner and outer lives in her writing, to think through her life, stems from an early experience of those who did so themselves.

Tupitsyn is known as a scholar of faces and philosophy though in Love Dog she is now talking first and foremost about love. Love as a means of both radical action and knowledge, love as the reason we make movies, watch them and look them up online and love as the scars left by images we cannot get enough of.

The camera is always on, so how do we live? We live like it is always on.  Like without it, we’re nothing.  We live like there is no other way.  Like being off is dead.  We live like life is one episode after another.  We have to be reminded of what we’ve seen, what and who we’re seeing, over and over. There is this unbearable loop of image.

Tupitsyn chooses to consider her own specific learning of desire via memories of movies and television — she is very much a product of late twentieth century media — in an online platform. The changes brought about by internet and digital technologies are not often directly discussed in Love Dog but their role in its making is foregrounded by Tupitsyn’s sophisticated use of the digital form. It is there, implicit. Time and memory, the power of media nostalgia, the way in which time affects media, what is remembered and what is lost, these concerns hover in every post. Tupitsyn does not attempt to mimic academic writing here and perhaps due to the live, diaristic qualities of the text, ideas and conclusions are not arrived at linearly as they might be in a text planned to progress rhetorically from beginning to middle to end, but emerge associatively through repetition and bricolage.  In the face of (interfaced with?) the  multi-media imageries of her everyday existence, past and present Tupitsyn uses feminism and queer theory’s radical love like teenagers use selfies and memes, collages of quotes and references and musings to enable the continued imagining of themselves, others and their relations, she makes sense of her self, of ‘X’ and of their relations and she opens them out from the personal to the political. She says:

The confusion of the “yous” here is a comment on intimacy as well as distance. How close someone gets. How in and out of closeness.  How it’s one person then another. Mixing personal pronouns is like a riddle.

The first and second persons are principle characters in Love Dog as I suppose they are in any diary, the ‘you’, the shifting but always object ‘X’. Masha as hero, the first person; ‘X’ is the second person, ‘you’, the object of desire. The book reads in such a way that the reader is forced to identify with the other addressed. ‘You’ is ‘X’ which could be me as I read, or any one of the others mentioned by Tupitsyn by name or the Beloved, or God, though it seems clear that ‘X’ is also a real and specific person — he studies with her at the European Graduate School

The title of the book, Love Dog, evokes for me the centuries-old mystical poetry of Rumi in which the second person and its use has a similar significance. One of his most well known poems, titled “Love Dogs” is an uncannily apt example:

One night a man was crying Allah! Allah!
His lips grew sweet with praising,
until a cynic said, “So!
I’ve heard you calling out, but have you ever
gotten any response?”
The man had no answer to that.
He quit praying and fell into a confused sleep.
He dreamed he saw Khidr, the guide of souls,
in a thick, green foliage.
“Why did you stop praising?” “Because
I’ve never heard anything back.”
“This longing you express
is the return message.”
The grief you cry out from
draws you toward union.
Your pure sadness
that wants help
is the secret cup.
Listen to the moan of a dog for its master.
That whining is the connection.
There are love dogs
no one knows the names of.
Give your life
to be one of them.

Uncanny synchronicities of my own reading notwithstanding, Tupitsyn herself locates the title’s origin in the story of Odysseus’ return to Ithaca and his dog who has waited patiently for him only to die immediately that he recognises his master. The ‘I’ of Tupitsyn’s book is the female hero, Penelope turned lover and protagonist. Tupitsyn’s love and longing for X, if not unrequited, is certainly a courtly love of seeking/waiting/calling, which allows her thinking to be manifest in her writing. Were her desire consummated would it have ever been written down? Tupitsyn characterises this productive yet passive state of desire through the Tarot; suspended in the hanged man time of the movies:

The Tarot’s Hanged man is also the card of in-between . . . I am living in the time-jump . . . The time-jump is the time in-between the wrong time and the right time. The time between me and you (X) . . . In the movies two characters meet at the wrong time and time needs to pass, to — jump — in order for them to be able to meet again . . . The point is that we, the viewers are aware of time — the time that’s passing between the two people — the characters onscreen are not.

More watching than touching and as much mourning as loving, Love Dog is about love but because of that it is about everything. In seeking/waiting for the beloved we come to know the world. Tupitsyn quotes Paracelsus:

Tumblr, where teenage girls were already writing and re-writing feminist and queer projects in reblogged gifs and ‘ask me anything’ and green eyebrows makes sense as a home for this work, though it bears noting that this aspect of the platform is not directly engaged with by Tupitsyn. Her correspondence in Love Dog is predominantly with fellow students at the European Graduate School and posts are more likely to respond to her lecturers Avital Ronell, Alain Badiou or Anne Defourmantelle than to reblog fellow Tumblrs.  The wider Tumblr community is invisible in Love Dog though, as the text remains online it is more accessible to them than it would be only as a book. It is more a philosophy student’s notebook than an interactive digital performance though to an extent it borrows that emerging form.

I find it hard to break the flow of Tupitsyn’s prose to go to the computer and follow connections, to do so feels counter-intuitive. The easiest way to do it is to use the custom YouTube playlist on the publishers’ website and yet somehow, for me it still doesn’t flow. It is like watching videos in an art exhibition, there is the feeling of resistance to switching time, from situated space-time — the eye running in lines over the page, the hand turning it — to suspended, flickering video time. Uncomfortable, but it does force a point, that media have their own conflicting physical realities.  In many ways this multi-media format requires as much effort from the reader as the writer.  The text is an artefact, to be decoded, not a single message, in the sense in which Chris Kraus has spoken of writing as performance art, a transcription of a life performed.

Love Dog is difficult to read, requires trust and empathy and, yes, love to engage with it, and sometimes I resented this, maybe because there is little I desire more than to be read like that myself. It is hard not to be jealous of the freedoms writing of this type brings and not to concede to the temptation to hurl the accusations of indulgence and privilege that are common responses to women, particularly beautiful ones who can somehow afford to take expensive  postgraduate degrees involving summer-school in Switzerland, travel often and write about their life. This is not to say Tupitsyn cannot and should not be engaged with critically (indeed I hope I have done so), but such generic responses would not only be un-generous and, coming from me, entirely hypocritical (not because I have these things but perhaps because I wish I did) but they would miss an opportunity to witness a very serious experiment in writing and thinking.

To take this work seriously is to recognise that this is increasingly the type of hybrid form that writing and thinking is taking in the world. Working in this chimeric, cross-category way is not a gimmick but a sincere engagement with the forms referred to and created by the writing.  Playful and procedural experimentation with language is allowing writers to adapt to and inhabit new technologies of communication.  Oulipo, the alum key of art writing, is never far away.  Classical texts collide with Judy Garland and John Cusack. Many things are possible in the current landscape of writing, immaterial or otherwise and here, by indexing a theory and practice of love to a shared pop culture of movie-watching that is, like writing, disintegrating or perhaps reintegrating into a digital future, Masha Tupitsyn begins to access a surprising number of these possibilities.