The Revolution of Every Day – Cari Luna 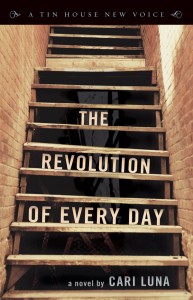 At the end of Bloomberg, we can hardly imagine a city without fake-sky-blue residential towers. But neither can we say those lots of strewn junk were preferable. A combination of tax structure, the rental market, and a dearth of middle class jobs augur a future Manhattan populated exclusively by stockbrokers, tourists, really good-looking schizophrenics and feral cats. No conscientious citizen would approve, were they ever asked. But then again, on the train to work, one might see the spine of a novel called The Revolution of Every Day.

Novels of the city have much to lose. Vividness is one step removed from banality. An unadulterated mirror to our lives is a slight translation hiccup from a Rough Guide to streets we know better than novelists. In New York City, a small coffee accented by unwanted fruit costs three dollars. Who or what is responsible? Cari Luna is in a good position to tell us, hanging closely over four lives spent fixing up Thirteen House, a fictional composite of a circa-1995 Lower East Side squat.

The squat plays an overlooked part in gentrification politics. Perhaps it is too many things to too many people: a daring reclamation of public space, a true cooperative; and a likely shithole, a failure to live elsewhere. The novel of place begins in a pan around the room, of fingerprints on banisters and the waft of vegan stew. Dogs, and dope.

Thirteen House fends off early Guiliani, but a true enemy is on the move. Steve, bona fide of the Tompkins Square riots, and Gerrit, Dutch punk, bolster a stairwell. They cohabitate with Anne of the Midwest, and Amelia, ex-junkie, respectively. The men are archetypal; shallow politics, callous hands. As the women tell their stories to themselves, they recall being taken in, not pursued. They are homesteaders against manifest destiny. A baby is coming, but to name a father is an Upper West convention. The dreaded yuppies make their first appearance by inference, their stoves and sinks — perfectly good — left on the street. But if Thirteen House has an intractable foe, it’s the vacuum of moral urgency, a hard vacuum to get in the ring and fight. We know the end of the story; the citizenry’s passive, settled conscience will accept expensive convenience.

What part of the city is dead now? Gentrification discourse is just that bloody and facile, glancing off the question of what rights people have to the hot-spotted urban cemetery. I do not read TROED dispassionately. Long ago, I left a show at C-Squat with a headache (the kids now call this drug something completely different). These days, I find myself ensconced in a diverse neighborhood radically changed in the ten years I assure everyone that I’ve lived there. (The local crime blotter may feature a steady stream of 5’7 bookish fellows stabbed to death for a box of breakfast cereal and last week’s New Yorker, but I have never felt danger.) The anxiety of accuracy serves as guide, checking off the list of dumpster dived foods that hold up, satisfied that someone “tugs the sleeves of her thermal shirt.” Luna writes this world well, though her sources seem secondary. Why don’t the Thirteen House squatters ever see a band?

I submit however that reading for this kind of accuracy is a low impulse and a losing effort. (Novels matching my perceptions exactly are owed to me! I pay my taxes! See this bizarre sense of entitlement for any TV show shooting on a Brooklyn street.) It’s a symptom of the marketing era: I am the audience for this, a realization like a Nielsen implant. So engaged with a plebeian sense of our own authority, we warily await reference to the Mars Bar or the World Trade Center. We make requests: novels that clock in under two minutes, as much like “Minor Threat” by Minor Threat without being wholly derivative. I do expect a novel of gentrification to lift up off the page; to demonstrate a moral basis for living like this. To find language for both the bulldozer and the girl at the barricade.

A novel’s liveliness should confound these expectations. The Revolution of Every Day proceeds to set the mental pace of its characters, speeding through perspectives. Gerrit is deformed by industrialized medicine. Amelia’s pregnancy is lonely; she takes her time with appraisals of bruised fruit. They reflect on lyrical troubles while grouting bathroom tiles, scavenging usable wood. Stacking crates of onions reminds them of all they’ve lost, or themselves abandoned to stake claim to a city eager to evict them. The Revolution of Every Day is rife with bodies in close proximity, not shy with improvisational sex, traced scars. Not a one of them are inclined to radicalism, even when Gerrit offers, “I’m the father, if that’s what you want.”

A court battle buys them time, but Cat, a veteran of the scene, sees them coming: the nineties girls “a translation of Cat for this decade.” They’re “younger, quicker, dumber.” The squatters of the Lower East Side would stand to be replaced even if the police weren’t prepared to drive a tank down a city block. Thirteen House rings in the new year. Trying to rally their spirits, Steve recites a half-drunk rant. Gerrit is embarrassed at the sentiment. Luna is qualifying her own, weighting Steve’s voice with rhetorical futility: take back the streets. (For whom? Etc.) Luna is conscious of cliché. Steve isn’t so skeptical of history as decisive as rousing speeches the night before the war. The moment is deflating — The Revolution of Every Day’s melancholy at its most complex. The squat is humid with freedom and sadness, which punk has always closely paired.

The novel of place turns out to be a novel of character by other means. People make one another their problem. Amelia’s belly fills the house with giddy, natal anxiety. Steve worries of “every cell south of his brain wanting to ditch sweet barren Anne for the good breeder.” Thirteen House has pipes “up to code,” but nests unkeepable secrets. Heart-to-hearts are misunderstood. Amelia and Gerrit turn their concern towards no other question than Is this any place to raise a child?

The borough of clean fingernails persists in an advanced state of irony: the gentrification of a neighborhood is bemoaned most by those who have recently gentrified it. They feel reluctantly safe in neighborhoods that are too nice. The Revolution of Every Day is in the peculiar position of dramatizing an idea that we all want to argue correctly; we are all implicated, and none absolved should we stay or go. Steve begs of his neighbors, “Look at everything you’re losing!” The city breeds nostalgia for any time it was easier to give meaning to life. When the revolution made living possible, that’s all. “Who says New York is New York only if there’s a knife at your throat?” Well, no one actually says it. We say the knives aren’t what they used to be.