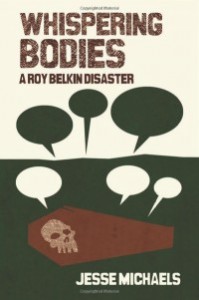 I spent my adolescence playing in punk bands, like plenty of people in my age bracket. It should be easy to understand the appeal: we were weirdoes within the walls of our schools, and we felt like strangers to our folks, but playing music offered us access to the people who felt the same way we did. We were a community of loners. As a member of Operation Ivy, Jesse Michaels did the same thing, though he was much more successful than I will probably ever be. Though plenty of us outgrew playing punk music (I did, so did Michaels), it’s hard to deny its importance in terms of nascent consciousness. However ironic, one of punk’s hallmarks is defiance by way of personal liberation. While it is important to see Michaels’ debut novel, Whispering Bodies, as a project distinct from what he was doing in Operation Ivy, where the two connect is in the way the novel echoes the experience of being a part of a counterculture and the attempt to create meaning out of the morass.

In a punk scene (and in rock music more generally), bands, songs, and places all adopt a totemic quality for devotees. It’s for that reason that I insisted that my Dad and I visit Op Ivy’s old haunt, 924 Gilman Street, on a family trip to the Bay. It’s for that reason that pilgrims stand slackjawed in front of David Bowie’s costumes and Bo Diddley’s guitars at the Rock and Roll Hall of Fame. It can’t be lost on Michaels that there’s something vaguely religious about all of this, and in Whispering Bodies this sense of religiosity is taken to absurd lengths. The protagonist Roy Belkin’s personal rituals often cross the threshold from rituals to compulsions. Rituals are repetitive and regenerative, so they are the lifeblood of organized religion (or countercultures, in some cases). Compulsions are harsh captors. While rituals imbue a life cycle with an added significance, compulsions tend to foster a certain stasis. Roy spends his mornings trolling a Christian message board, called Helping Hands, posting bizarre screeds on whatever topic he sees fit. A highlight includes a post on a gospel called “The Book of Lazarus,” which mentions that “Jesus could fly […] he could not wilk [sic] on water […] he loved the lady from the well […] he was not a carpenter, more like magician or doctor.” He calls this trolling “The Service.” When he can muster the courage to leave his apartment — usually after throwing about sixty wet paper towels into a cup of cold coffee (“Thuds”) – he wears a sheet of paper around a necklace (“The Shield”) to protect himself from the horrors of the external world (“The Pounding”). He only really leaves to go visit his father, a savant code breaker in some kind of nursing home run by a shadow-organization within the US Government.

Roy’s world is essentially a counterculture of one. His cordoning of himself from the world is precipitated by a mutual rejection of the world outside of his apartment, though it’s not clear who was the first to alienate whom. He is the strange man in his apartment building who wears a paper towel on a necklace, his neighbors are the Pounding that necessitates this Shield. Of course, Roy fails to realize that his exclusionary tendencies and cockamamie compulsions bear plenty of similarities to the outside world he so desperately avoids. It’s a realization at which Roy never arrives: his morals are absolute from beginning to end. On the one hand you can admire his steadfastness, but that’s being overly charitable. Generally, his pigheadedness is deplorable, and it makes it difficult to invest into his narrative.

Roy meets his match in Pernice Balfour, a bible-thumping woman from his building framed for the murder of the maintenance worker. In conversation, she often quotes from the Bible, but chooses her quotes by thumbing to a random page as opposed to situating the Bible into any sort of context. Roy finds himself drawn to her, because while she was clearly religious, “it was a different kind than practiced by those idiots he savaged on the computer every day. She seemed to be without artifice of any kind.” It’s true: Pernice practices her religion with deranged fervor, between her quotes and her tendency to lapse into faux-Biblical syntax (she calls it LORDWORD. It mostly consists of ending words with the suffix  “-ith.” I suppose it’s like Pig-Latin in reverse, an unnecessary hoop for an interlocutor and a reader to jump through). She’s a zealot in her own way, but she’s only beholden to The Holy Spirit on her terms. Once she is framed, he devotes himself to clearing her name, posing as a detective and running an investigation parallel to the inept SFPD’s case. In helping Pernice and circumventing the cops — here a metonym for conventional societal structures writ large —  Roy is able to break through the toxic lethargy that characterizes his life. But it’s a case of too little too late.

Throughout Whispering Bodies, Kafka’s The Trial is a clear reference point, from the tautological reasoning on the parts of the police and the main characters, to the fleeting and unnerving sexual interludes. The police seem to have no idea how to begin solving the murder case, blindly operating according to their own internal logic. Even Roy’s photo shoot with a lecherous crime photographer in his building’s cellar serves as the same kind of aside as K’s fleeting glimpses of S&M as he awaits his trial. In linking himself to The Trial, Michaels attempts to align himself with a quintessential exploration of what happens when signifying and significance become a feedback loop. When customs, stories, laws, or people don’t point beyond themselves, it’s impossible to infuse any sort of meaning into them. In this way, rituals become compulsions. When applied to a life writ large, it becomes a stultifying way to live. Michaels understands this point as well as Kafka did, but Whispering Bodies lacks Kafka’s surgical focus.

That’s not to say that Whispering Bodies is without promise; Michaels writes in hard lines, just as he did in Op Ivy. He has an eye for perversion, and conscience to rein it in. But his undoing is also that of punk rock: the hard lines he draws and the hard stances he takes are too firm to be quite accurate. It’s convenient, but that convenience should be a red flag.

The object of satire of Whispering Bodies seems clear — countercultures in general, organized religion, government bureaucracy, personal sanctimony — but the occasion for the satire seems less so. The best satirists offer some new insight into their lovingly dissected marks, but Whispering Bodies is built on abject fury. This is perhaps the most frustrating aspect of Whispering Bodies: much of the intellectual underpinning of the novel hinges on attacking a straw man. As a caricature, Belkin and most of the characters in Whispering Bodies skew sharply towards the grotesque rather than the humane, so Michaels’ satire loses its bearing on reality. At its best it’s good for some mild laughs, but it’s downright mean-spirited at its worst.