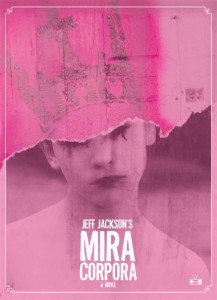 The lines between author and character are getting blurrier and blurrier in the world of contemporary fiction. Look at How Should A Person Be?, written by Sheila Heti about a character named Sheila Heti. Or Tao Lin’s Tai Pei and Choire Sicha’s Very Recent History, in which the protagonists serve as literary proxies for their respective authors, pseudonyms merely acting as threadbare veils that mask the undeniably autobiographical events therein. Memoir posing as “fiction” is just irrefutably en vogue.

So it is with Mira Corpora, the debut novel from Jeff Jackson, who treats his readers to high-octane, frantically lyrical scenes from the life of fictionalized protagonist Jeff Jackson. Deemed an “anti-coming-of-age-story,” Mira Corpora splits the sordid life of Jeff Jackson the Character into seven distinct sections: we follow him on a dissonant, hallucinatory, and gorgeously grotesque journey as he ages from six to 18. Jeff Jackson the Character is a derelict who 1) runs away from his abusive mother, 2) literally hunts for beauty at the age of six, 3) becomes entangled with a colony of wayward children who turn a corpse into a burning effigy, 4) pursues an enigmatic rock god with a group of teenaged street urchins, 5) falls into the care of a sadistic geriatric who pumps him full of drugs and persistent paranoia, and 6) learns of his mother’s death, bringing his lengthy and bizarre pilgrimage to an end. This death provides catharsis, which leads to his official matriculation into adulthood, towards which all the previous sections have been building. In the final section titled Mira Corpora (My First Fiction), Jeff Jackson the Character (Author?) realizes: “I want to write some version of what’s happened to me, but I have no idea what sort of story might spill out.” The novel becomes an ouroboros, consuming its own tail into infinity.

Jeff Jackson, in lending his name to his protagonist, blurs the lines between fiction and personal memoir, between the author and the character created. How strong are the ties that bind? By this author’s own admission, as strong as bloodlines: “The character Jeff shares some of my biography,” Jackson explained in a recent interview with Tinhouse, “while other aspects were partly or wholly invented, or borrowed from friends and acquaintances. […] as the novel evolved, I came to know the character so well that he earned the right to my name.” Similarly, we the readers become intrinsically embroiled in the protagonist’s worldview, embodying all the turmoil and confusion and exhilaration of maturation, transformation, evolution, whether we like it or not.

The entire novel churns forward in an unburdened stream with Jeff Jackson the Character’s urgent voice rushing the narrative apace with all the suspense and adrenaline of a thriller, albeit quite an eccentric one. Don DeLillo, famously averse to blurbs in recent years, publicly claimed, “I hope the book finds the serious readers who are out there waiting for this kind of fiction to hit them in the face,” which implies shock, being doused in cold water, reeling. Instead, I’d characterize Mira Corpora as a seduction. It heightens the pulse and warps the mind with the allure and cliffhangers of a sexy action flick.

But the end of each entangling section brings the reader to a screeching halt as the next section puts the key in the ignition. While reading, I quickly realized that each new segment brought with it the burdensome baggage of a completely different environment, a new tone of voice, a new array of characters whirling in our protagonist’s orbit. Perhaps this imitates the many skins one sheds in adolescence, but it sure felt like a lot to ask of me. Each section is meant to startle, but I was never lulled in the first place. I was racing along Jeff Jackson’s track at full speed, until the end of a chapter sprung up as a sudden stop sign forcing me to jam on the brakes and start from zero.

What is electrifying is Jeff Jackson the Author’s attempt to test the limits of what Fiction with a capital F is presumed to be: a narrative that adopts a singular style and tone at the outset that is maintained throughout, reliable and unswerving. However, when paired with warp-speed plot pacing, these disparate sections don’t push exactly the right limits in exactly the right way. These seven eclectic portions are meant to synthesize finally into a Frankensteinish whole. However, since there is no through line of increasing momentum, but rather several stops and starts, the pieces are left strewn and incongruent. Each of the seven acts is thrilling on its own, certainly, but when the finale arrives, they just don’t add up.