Unsteady Footing in an Unsettled Map

When seeking asylum in countries such as Australia, Belgium, Germany and the Netherlands, migrants must undergo a voice test, imparted by a private Swedish company, which aims to verify the validity of their asylum claims. During a phone interview, at the other end of the receiver, a program records samples of the asylum seeker’s voice that are then analyzed to establish his or her specific geographic provenance.

Does the applicant come from a place where living is unbearable enough to justify the concession of asylum? Particular words are chosen to identify the linguistic influence prevalent in the accent, and a lifetime is reduced to a point: one name, one place.

For his recent Conflicted Phonemes (currently on view at the Tate Modern in London as a part of the exhibition Word.Sound.Power ), artist Lawrence Abu Hamdan has worked together with a group of Somali asylum seekers who were all rejected from the Dutch migration office because the results of their accent tests located their place of origin in the relatively safer region of Northern Somalia. But amongst famine, waves of war, the resulting forced internal migrations, and the proximity of a plethora of linguistic groups, the accent of a person from the Horn of Africa exponentially grows in complexity, and establishing an individual’s provenance from a phone conversation becomes a self-defeating and absurd proposition. This not so recent but fairly unknown application of forensic linguistics is another of the many cruelly arbitrary practices intentionally restricting human migration. The practice can be easily contested on the grounds of linguistics, as the test’s accuracy is limited, but more than this it also constitutes a brutal intrusion of legal regulation into someone’s personal voice. It overlooks the obvious point that human migration (and experience, and way of speaking) is more of a glorious over-flowing than a tidy, regimented stream.

To give the migrants, all coming from South Somalia, a chance to express their discontent with the unfair results, Abu Hamdan, together with Janna Ullrich, realized a wall chart that maps internal migrations in Somalia and their impact on people’s lives and voices. The chart traces discrete migratory movements and marks the interaction between migrants and speakers of different dialects and languages. A take-away sheet of paper shows a voice map designed as some sort of engine, a floral Venn-diagram with bike-chain-like petals. Each individual chain rotates on one end around a subject placed in the center of the flower, and on the other end, pointing towards the outside, around one of her interlocutors. What conjoins each couple — the chain itself — is one out of their many potential common languages, ranging from English, to Somali dialects of Benaadir and Maay, to Amharic. The design gives a sense of motion and buzz, an intricate overlapping of linguistic expressions all rotating around the same individual. It is a sophisticated machine that tries to balance centripetal and centrifugal forces, pulling subjectivities apart to then recombine them again. 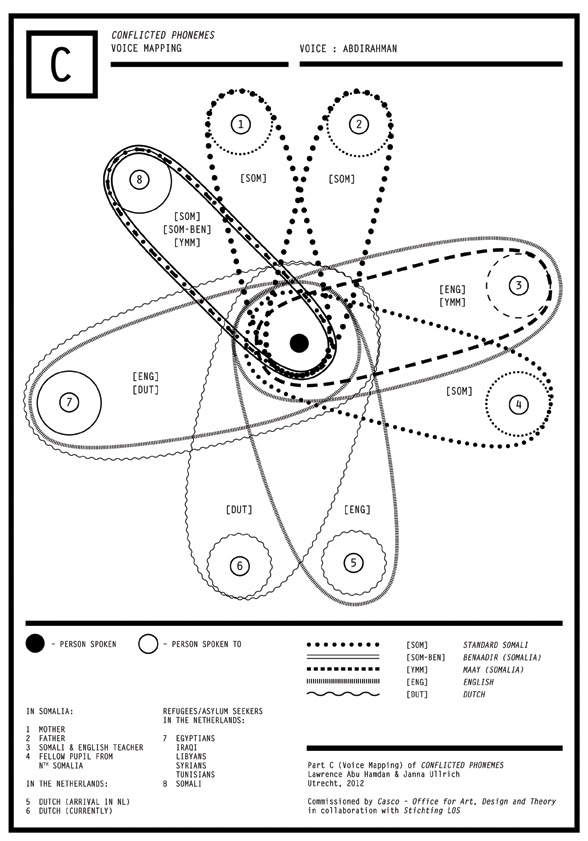 In the last paragraph of the statement published together with the work, Abu Hamdan explains why he chose to draw a map. Notwithstanding the inevitable tendency of maps to abstract and digest the complexity of reality, this time, cartography lent its services as a necessary tool to make that very complexity appear. Indeed, the wall-chart is by no means simple to read. It is a large spread with color schemes, full of symbols that take time to understand. It requires a careful look and listen.

But beyond Abu Hamdan’s legitimate impatience with maps and cartographies, the project’s way of thinking together linguistic influences and maps of migration holds a special aesthetic power that, for me, stirred a number of more personal thoughts. As most non-native speakers, my learning of the English language was a matter of encounters: an accumulation of words, people, sentences, personal relations, street signs, inside jokes, an open vowel, a closed vowel, books on different topics borrowed from libraries in different continents. It is a list of parts, at times hybridized in a coherent way and others not.

Some inflections can be traced back, but to a line, rather than to a point — to some sort of biography of the sound, intertwined with mine. We can imagine them as streams of concurring vectors, moving from place to place as sequences that I can walk back through, following the influences that, in time, have transformed my way of rounding an ‘r’ or moving an accent from one syllable to another. Looking at this personal map of influences and travels at a microscopic level, though, magnifying (or rather nullifying) the representational scale of the map to a 1:1, the result might look more like a heterogenous amalgam of bits and pieces, meshed together at different levels of intensity, as not all sounds are happily and smoothly accommodated. Some remain a dust or a friction.

And inflections do not accumulate only linearly in chains, but all around. The map may become a flattened landscape where all the bits and pieces appear organized on the same plane as an environment of elements that have been brought together but do not necessarily belong together. They are forced into cooperating and performing more or less standardized pronunciations and, therefore, articulating sense. It is like a weird puzzle in which not all bits fit in, so you forcefully push them together and break them. The outlines are everything but smooth, inconsistencies and fissures are left open, little cracks and gaps appear.

In those gaps the whistle of a rustling ‘s’ comes through, a vowel remains too open, or not open enough, a sound is distorted, ‘gh’ and ‘f’ and then ‘i’ and ‘y’ get all mixed up. The way I visualize this cartographic representation of language, then, is more like a territory of sharp crevices and overhanging, telluric movements and magmatic bulges. These irregular points of conjunction are places of maximum contingency, if not danger. It will take a patient (and passionate) listener not to lose balance and fall. Everything can happen there and so this map will never settle. It will change with every utterance: valid for an instant and an instance and then good for nothing.

Because then there is the act of speaking itself and the traction it provides, the movement, but also the feelings and anxieties, calmness, sorrow and joy that come together with each and every expression. If it is a map, it is one that I keep running on and swirling as I please, or rather one that I perform anew every time I speak, crunching sounds and places, recombining them in my voice.