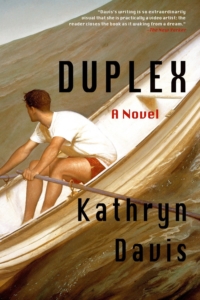 Kathryn Davis’s novel Duplex reads like a waking dream. Davis’s sentences channel that half-state between consciousness and unconsciousness, that foggy place where you realize you’re waking up but are still enraptured by the vivid imagery that’s been parading through your head all night. And just like those dreams, one feels compelled to attempt to make sense of it.

From the very first page, Davis introduces us to a futuristic suburb that at first glance doesn’t seem to be all that different from 1950s America: it’s a summer evening, boys are playing baseball in the street, girls are trading stickers on porches, and parents are sipping highballs and playing canasta. Davis’s approach to introducing the various sci-fi/fantasy elements throughout the book is to operate under the assumption that nothing is out of the ordinary. For example, rather than draw attention to the fact that there are actual robot families in this world, she nonchalantly introduces them in the first chapter: “Everyone knew the family inside number 37 were robots. Mr. XA, Mrs. XA, Cindy XA, Carol XA – when you saw them outside the house they looked like people.” And when it comes time to explain the differences between robots and humans, she matter-of-factly delineates between the two: “The passage of time made no sense to the robots; their farsightedness extended backwards and forwards in ways that bore no relationship to it. They could see everything that had happened and everything that was going to happen – the only thing they couldn’t do was change what they saw. The robots needed us to change things . . .” This narrative style is in keeping with the dreamlike quality of the prose — Davis is counting on our accepting everything we’re told as fact, as if there’s no reason why things should be any other way.

Such an authoritative tone makes it easy to draw lines from Davis to a character named Janice, a young woman who tells fantastical stories to a rapt audience of neighborhood girls several times over the course of the book. It’s unclear where Janice and the girls exist in the timeline of the novel, but like Davis, Janice brooks no argument (or really any interruption at all) when it comes to her stories, all of which are framed as histories: “The thing I’m talking about happened long ago, Janice said. Not as long ago as the Rain of Beads but a thousand times worse. People used to think the Horsewomen were involved, only this was another group. They were older and they were human girls and they had a leader – they called themselves the Aquanauts.” These tales serve to establish a common past that characters refer to in the other chapters of the novel — references to the Rain of Beads and the Aquanauts are invoked offhandedly, in some cases before we’ve even read the pertinent story, and it’s assumed we understand the allusion. It’s a canny decision on Davis’s part, as Duplex is not a lengthy novel, and Janice’s stories function as pseudo-myths in their own separate chapters while simultaneously creating a shared history that helps the author’s world-building endeavor along.

The main plot of Duplex revolves around Mary and Eddie, childhood sweethearts who we watch grow up and apart. While there are several passages from their point-of-view, much of what we learn of them is pieced together through other characters’ eyes, most prominently those of Marjorie Vicks, elementary school teacher and Mary’s duplex neighbor during her youth. Marjorie has a fling with the enigmatic sorcerer Body-without-Soul, owner of the mysterious Woodard estate in town, and then watches as Mary grows up and ends up marrying the sorcerer instead of Eddie — for in his youth, Eddie had surrendered his own soul up to the sorcerer in exchange for a successful pro baseball career and was never the same afterward. Eventually, Eddie gets injured in a game and recovers in a water tower for an indeterminate amount of time before returning home to his parents and, much later, recovering his soul at the end of his life in a convalescent home. Mary has a daughter named Blue-Eyes with the sorcerer (in an appropriately bizarre fashion), struggles to relate to her as she grows older, and sends her off to a private school, while Ms. Vicks ends up meeting Blue-Eyes at that private school at the end of a long, surreal journey she takes (and also passes by Eddie’s recovery room on the way there, though on the opposite side of a tall wall dividing them).

Attempting to write even that cursory plot summary felt like trying to explain a particularly vivid dream to someone else rationally, and the plot certainly doesn’t seem to be the point in Duplex. Going into it expecting a typical dramatic structure is as futile as attempting to impose such strictures on your dreams. In some ways, the absence of that familiar backbone is what makes the novel so absorbing — I know I wouldn’t have been so set on parsing this strange world if the plot had proceeded along familiar lines. Davis mashes up the realistic with the fantastic in sometimes hilarious fashion — robots can make themselves look like coins and needles to humans and can see past, present and future all at once, but get upset when humans don’t remember that they can’t experience life in the same way that we do: “When a robot is hurt by human insensitivity – when the human fails to remember that robots never sleep, for example – then the robot might not bother to modulate its voice or make it sound like the product of a human voice box. Cindy’s voice still sounded human but it also sounded as if it had gotten trapped in a box made of metal on a planet in another galaxy and was beating against the sides of the box trying to get out.” But the blend never feels contrived, and I think this has something to do with the underlying system of recurring imagery that Davis subtly deploys in and around the plot’s outlines. Burning haystacks, schoolgirls in blue dresses, coins, stickers and many other little details keep showing up, not so much to help orientate you amid the swirl of points-of-view and timelines as to heighten the overall oneiric tone of the story. Their repetition feels natural, waves advancing and receding over and over, adding to the hypnotic effects of Davis’s language. It’s easy to get lost in the world she’s created.

And that’s really the only problem I had with Duplex. I was so enthralled with unraveling and absorbing the details of this weird, wonderful fictional world that I had trouble relating to any of the characters in it. The fragmentary plot isn’t quite coherent enough to form any real connection to Mary and Eddie. Their brief interactions with each other early in the book feel stilted, and then we don’t see them together again for most of the rest of the novel. It feels like Davis missed the chance to humanize them more fully, especially given the antithetical presence of those loveless robots and the soulless sorcerer — the innate bond Mary and Eddie are supposed to have is repeatedly mentioned, but I never saw it on display anywhere and thus never truly felt it. As a result, I reached the end of the book dazzled by Davis’s vast imagination and beautifully expressive language, but largely unaffected by the characters’ journeys.

As I mentioned at the outset, Duplex’s rich world provides fertile ground for the curious reader — though if you’re looking for specific, concrete interpretations, you might be disappointed. Fortunately, I don’t think this is the only approach that Davis set out to foster. I found it more pleasant to just let the shifting patterns and imagery wash over me, until by the end of the novel I felt not unlike the Aquanaut who got swept back to shore in one of Janice’s stories: exhilarated, exhausted, and more than a little dismayed to find myself in the same world I’d so utterly left behind while reading.