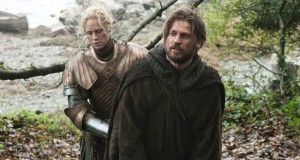 The book is almost always better than the movie. It’s hard to think of a more obvious, less debatable statement — even when the film adaptation is quite well done, it’s a lot to ask for it to surpass (or even equal) its source material. This is especially true of fantasy novels, those bloated beasts of thorough exposition, florid description and epic quests. J.R.R. Tolkien’s The Lord of the Rings is one of my favorite books, so a decade ago I was simultaneously excited to witness the spectacle on screen, while prepared for the films to inevitably disappoint in some ways. Peter Jackson got my hopes up with Fellowship of the Ring, only to let the air out of my balloon slowly over the course of the next two films (in the case of the extended edition of Return of the King, very slowly).

George R. R. Martin’s A Song of Ice and Fire has fared much better on the small screen. While I hadn’t read any of the books when I first started watching Game of Thrones, I was elated to discover how natural this epic fantasy felt on television. After the third season ended a few weeks ago, I decided to read the books at last — mainly out of a consuming desire to continue the plot, but also in an effort to find out just what made this fantasy epic so conducive to the episodic structure of the television series. I’ve almost made it to the same point in the books where the third season of the show ended, and have been quite impressed with the show’s fidelity to the tone and themes of the text. I’ve also been intrigued by the symbiotic relationship the two entities have formed in my mind. Far from my reading/viewing experience with Lord of the Rings, I actually feel that watching the television show Game of Thrones has strengthened my reading of the books, and vice versa.

To start, the sheer number of characters in Martin’s fictional world is a bit overwhelming, and the connections between and among all of them form one of the most complex webs of influence I’ve come across in any book, fantasy or otherwise. The metaphorical butterfly flapping its wings down south in King’s Landing makes the wind blow that much fiercer up north beyond The Wall (and probably kicks off a sandstorm near Qarth). It resembles nothing so much as a massive soap opera, with all the requisite marriages, deaths, betrayals, etc., setting each other off in incredibly elaborate chains of cause-and-effect. Perhaps fittingly, I found it much easier to wrap my head around this vast character ecosystem on the screen than on the page. The same goes for the numerous cities, castles, forests, etc. that make up the wide world of Westeros and beyond. The opening credits of Game of Thrones are a master class in establishing a complicated geography in a few minutes, leaving you free to focus on the action at hand, and each chief location is shot with its own unique set of hues, unobtrusively reminding you of where you are at any given time. That said, the maps found in the books are much more detailed, can be pored over, and certainly need to be continually referenced if you hope to understand the finer points of the characters’ journeys around the world and the various military strategies that are devised and debated throughout the story.

The books are also able to emphasize characters’ internal moral quandaries. Obviously, this is something that all books can do extremely well, as they have the inherent advantage over television of the ability to express characters’ innermost thoughts in detail sans dialogue. None of the main characters’ thoughts or experiences in Game of Thrones are given precedence over any others, as the camera views all their actions equanimously (apart from devoting more or less screen time to them). But the dramatic and thematic impact of this POV establishment is quite powerful and pushed to the forefront in the books. None of the chapters in the books have proper titles — they are all simply the name of the character whose point-of-view the section is told from. In big, bold letters at the start of each new chapter of the text, Martin calls our attention to the fact that every single event in the books is told from one biased POV or another, forcing us to reckon with his characters’ moralities (and how we perceive their moral natures) in the very way he structures his story.

In fact, I wouldn’t be surprised if this was a big part of the reason why HBO felt that now was the right time to adapt this particular fantasy series for television. Shows like Mad Men and Breaking Bad are posing many of the same moral questions that Game of Thrones does, introducing characters who are constantly moving one way or the other along that spectrum of heroism and villainy, justifying their actions to themselves and those around them, asking us just how far we’re willing to go (and even how far we should be willing to go) to relate to these kinds of protagonists, to condone their actions. Martin’s fantasy world has these characters in spades, and thus has an undeniably modern sensibility in spite of its medieval/magical trappings.

Lord of the Rings establishes good and evil as known quantities, with good winning out in the end, a narrative that (being published in 1954) is understandably in step with the moral sensibility that dubbed World War II “The Good War”*. A Song of Ice and Fire isn’t so sure about most of its characters’ moralities — many of its “good” characters can exhibit ruthlessness and pride, while many “evil” characters are sometimes selfless and merciful. In this age of anonymous bombs dropped by flying machines half a world away on “enemy combatants” (read: “bad guys”), Martin’s Westeros provides a bracingly contemporary contrast to Tolkien’s black-and-white Middle-earth: friends and enemies all depend on who is telling you the story and where you’re situated in the narrative. Lord of the Rings allows me to escape my limited perspective for another world; A Song of Ice and Fire forces me to be acutely aware of that limited perspective, and to evaluate it in relation to the world around me. It’s gratifying to see that its television adaptation is so faithful to those themes and that process. The dragons are just gravy.

*The unabashed Tolkien fan in me can’t allude to this without also making clear that Tolkien vehemently condemned any attempt to read Lord of the Rings as a World War II allegory. I’m merely situating the publication and unequivocal success of the book in its particular cultural time period, not making any allegorical argument.