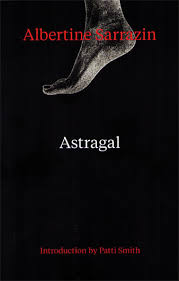 Tr. from French by Patsy Southgate

French-Algerian author Albertine Sarrazin’s 1965 novel Astragal is the kind of slim volume so immediately captivating that one might easily feel compelled to read it straight through in one breathless afternoon. But it’s not so much the story — of a young, injured girl’s anxious days on the lam — that keeps the pages turning. Rather, it’s the girl herself. Astragal seduces through the intimate voice of its fugitive narrator, 19-year-old Anne. The story — drawn from Sarrazin’s own life — of Anne’s escape from prison, subsequent incapacitating ankle break (the book is named for the bone she snaps), and arduous recovery, is so alive with Anne’s voice that reading it, one wants simply to remain in her presence, to sit by her bedside as she squirms, frustrated, towards recovery. Anne makes good company.

Anne and her lover and rescuer Julien live precarious lives. He pulls heists to pay for her care while she anxiously awaits his return, and later, when she can walk, she supports herself as a prostitute on the streets of Paris. But much of the book is more quiet, invoking the feeling of being submerged in the mind of someone who has been too long alone, thoughts circling round and round. We know all of Anne’s momentary cravings and discomforts. As she sits anxiously at dinner, she’s unable to go to the bathroom because she can’t walk on her broken foot. She writes:

Since the beginning of the meal, I’ve reminded myself of a kid jiggling about shyly on a grownup’s chair: I dream of rising discreetly and with dignity, saying, ‘Excuse me a moment,’ and of walking, casually, as though there were no particular hurry, to the back of the ballroom where the corner “Toilet” has lost its neon but kept the letters.

Later, in another hideaway, she sits deprived of cigarettes, attempting to listen to her host speaking to her, but instead thinking, desirous and distracted, of “the warmth of the smoke which flows, liquid, with a slight bitter edge, into your throat and chest, making your blood tingle . . . ” and “all of the ashtrays I’ve emptied in my life.”

She spends much of her time thinking of Julien: what he is doing, what she owes him, in what ways she loves him. In this sense, Astragal is something of a love story. But Julien always remains shadowy. He is a protective and comforting — but also unpredictable and frustrating — figure, coming and going and saving Anne’s life while she’s stuck in bed. Anne sometimes wonders whether her love is just circumstantial: “Do I really want this man so much? He eases my idleness and pain, he is my joy, yes, but . . . If I were able to hope for something else, some other form of pleasure, would I have chosen him?”

This sense the book gives, of a friend telling a story, is perhaps what lent Astragal such a talismanic quality for Patti Smith, who writes the introduction to the new reissue of Patsy Southgate’s 1967 translation. Smith writes of finding her worn copy years after having first read it in the early 1970s, and, strongly feeling the presence of Albertine herself, wrapping the book in a handkerchief: “It was as if I had Albertine, a battered blossom, beneath my twenty-first century version of sweat-stained tee shirts.” This sense of delicacy and damage comes partly from the fact that Sarrazin died at the age of 29, just a few years after her book was published. It becomes impossible to read Astragal or know its heroine outside of the context of Sarrazin’s own tragic story. Through Anne, Sarrazin emerges as a person fragile and vulnerable, yet full of a fierce energy, leaving some of the substance of herself behind in the form of her writing.

Anne represents a kind of free and rebellious spirit that might, in the mold of Dean Moriarty of Jack Kerouac’s On the Road, present a tantalizing sense of dangerous possibility to young readers, as it did for Patti Smith. But this gets to an odd tension in Sarrazin’s story. Everywhere Anne goes she somehow finds herself confined to a “rectangle” of one kind or another. While Astragal at times recalls such tales of lovers on the run as the films Breathless and Bonnie and Clyde, this is not a road novel, but a story of imprisonment that is always present even if it sometimes changes form.

Everywhere Anne is sitting or lying or strenuously trying not to limp. She does not move with ease. At once determined and resigned, she tells us “Jail is my right road,” and she never doubts for a moment that she’ll go back someday. While Astragal always maintains an edge of suspense as Anne teeters constantly on the edge of arrest or some other disaster, this is really a story of long convalescence and scraping by to just barely survive. Still, for all the tedious detail of hospital rooms and ankle casts, for all of the rectangles Anne can’t quite make her way out of, she remains an utterly romantic and engaging figure. We always want to spend more time with her.