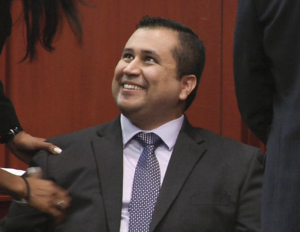 During its centuries-long continuum of racist violence, the society that now finds Trayvon Martin’s killer guilty of nothing at all has occasionally been pressed to wonder: What if? Here, specifically, what if Trayvon were white? What if George were black?

The question is inevitably the starting point (and often also the ending point) of race & crime focused discussions. The question is simple, and interesting because it’s often asked by both racists and those they oppose, each side seeking to demonstrate race-based treatment (as if any other kind of treatment were currently possible). If Martin were white? If Zimmerman were black? The question is such a marker of the obvious that it doesn’t need to be asked. It goes without saying that things would have gone differently.

But that’s not just because the jury might have seen a black George or white Trayvon differently (although, certainly, they would have). It’s because our laws and the modes of being they produce and reinforce are part of a rigid, racist hierarchy. But racism is a symptom of this order, not its reason for being.

When Christianity ruled the West in the Middle Ages, it was awesome to be part of the clergy. And, under feudalism, it was awesome to control land. The worst things people could be — the “other” thing needed to counter and uphold the righteous and the landowning — were the heathens and peasants. From the late 15th to 18th century, when the landed gentry formed the ruling elite in the New World, the worst thing you could be was an “Indian” or a “negro.” Now, under the rule of the imperialist orders of the white western bourgeoisie, the worst thing you can be is still black and poor.

Many are using the specifics of the case — the supposed lack of evidence, the specifics of Florida’s laws, the need for self-defense, or not — as a way of justifying or at least processing the obvious and pristine injustice of the verdict. But this is not about the specifics of the case. Laws are always designed to uphold and reinforce the social orders that create them, and so, as George Jackson understood, writing from prison in the early 70s, “Anglo-Saxon bourgeois law is tied firmly into economics. It protects property relations and not social relationships.”

Cases like this help make clear to many that the laws of this society don’t serve them, that they are set up for failure, funneled from crumbling neighborhoods into decrepit schools and then into prisons, or, if lucky, allowed into the workforce where their labor can be exploited. Their voices are clear, righteous, easy to understand.

But we need to understand those rallying behind Zimmerman, too.

As our social order becomes more openly authoritarian, the level of surveillance total, our police state more overt and visible, more people have reason to feel as if they’re being squeezed closer to the bottom of the hierarchy. Supporting Zimmerman — and the other figures like him who are sure to emerge, now with a legal precedent justifying their actions in advance — may be one way for those people to remind themselves, as they begin to feel their own acute loss of freedom, that they haven’t reached rock bottom yet.