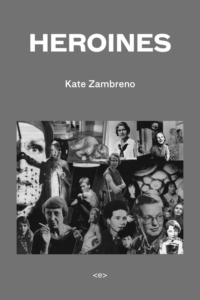 Days 1 and 2 of our discussion can be found here.

Helen, I think that your question about why we haven’t touched much on Zelda Fitzgerald, Vivien(ne) Eliot, Jean Rhys, or the other writers whose lives have, for Zambreno, typically been “discarded or lost or mythologized” is really important, since writing these lost biographies seems to be a crucial part of the book’s self-proclaimed project. But this desire to recover “the materiality underneath the text, the real, raw lives lived, bodies that suffered, were ultimately confined,” seems to me to sit uneasily with everything we’ve been talking about so far regarding the book’s frame of obsession and possession.

To me, one of the things that is exciting about Heroines is the way it registers a complicated dynamic that exists between subject, author, text and reader. Helen, I think you captured this really well in your discussion of textual digestion as less a process of mastery than one of incorporation and mutual transformation. Heroines brings this passionate, embodied, and productive engagement with texts to the fore, reminding us that the relationships we have with books and authors is not objective in any sense. Heroines is a memoir of reading and writing, about the effect books have on us and we have on books. And Annie, I think that your emphasis on obsession captures this affective dynamic that a philosophy of the Girl can bring out. Zambreno is constantly referring to her personal “experience of reading.” As she describes it, “I lose a sense of equilibrium reading these books — I get too inside.” Similarly, “criticism,” the productive end of reading for Zambreno, “always originates in feeling.”

But the corollary of acknowledging the process of translation that takes place in reading and writing is that it becomes a lot harder to believe that her subjects “speak through her” in the way one might speak through an open window. If Zambreno is a medium, then equally important is the fact that there is a process of mediation implicit here.

This is a book that is far more interested in continuity than about particularity. In it, Zambreno discusses systematic oppression leveled against a particular type of woman. “I am trying to conjure up an atmosphere of oppression” she says to explain the accumulation of facts and fragments. But in so doing it discourages us from talking about Zelda or Djuna or Virginia on their own.

It’s not so much that there aren’t particulars to be found in Heroines. As has been already mentioned, it is exceedingly well-researched. But this specificity is elided, I think, in the emphasis on shared experience that can be found throughout in the way Heroines’ fragment’s fit together:

“Virginia and Viv encouraged not to have children”

“Jane and Viv. The nervous girls”

“My life mirroring the mad wives more and more”

To me, the cost of building community in this way, through likeness and parallelism, is that it obscures more than it reveals “real, raw lives lived,” and leaves me less interested in those lives in themselves than in the way Zambreno works with them.

Saying that this is a book about writing literary criticism, more than it is a work of literary criticism in its own right, I’m afraid of effacing some of the real important literary and cultural critique that we find here about the nexus between behavior, psychiatry, writing, and gender oppression. I find especially interesting the way she explores the dictate to “compose yourself,” illustrating how it has and in large part continues to permeate our literary, but also everyday culture. But in the end Heroines is for me more about Zambreno discovering an alternative to the unrecoverable figures of her (non-)Canon through the invisible community she has formed online with other writers with similar obsessions. And I’m intrigued about her discussion of the internet as a radical space open to an “entirely feminine form of criticism,” one which can counter that edict to “compose yourself.” But I’m also not wholly convinced. It reminds me of a strain of techno-utopian writing that followed on the heels of the internet’s emergence and which hasn’t, to my mind, delivered on its hopes and promises. So I guess I wonder what you think about the way she talks about this subsubcommunity of literary blogs. Are they, (or do they have the potential to be) as radical as Zambreno suggests?

I feel like last month’s celebration (and subsequent re-grieving) of The Bell Jar sort of re-opened these questions of who is privileged in the act of speaking for somebody. We have talked quite a bit about the ethical questions of this, and a Guardian listicle about where Sylvia Plath might be in the contemporary — had she lived, were she alive today — prompted in me a pretty strong, visceral reaction. An indignation that even literary greats in the contemporary (Winterson, Egan, et. al.) are besmirching Plath’s name by what feels like pretty gross speculation about what turn her struggle with mental illness might have taken now with today’s so-called leaps-and-bounds in psychopharmacology. Kate Zambreno, in fact, felt a similar indignation, and tweeted about it, which only built on the kinship that I already feel for her as a writer. In this moment of invisible one-sided internet kinship I felt like I finally got what Helen has been talking about, because it feels like an indignation to hear writers, even those you admire, speculate that Sylvia Plath, personal-hero-since-age-15, spoken about in such an oh-well-psychotropics-might-have-saved-her way. It felt rude, and it felt like these women were not properly speaking for Sylvia Plath and were thus not giving her her due, but it also felt deeper, because in this tiny little moment of reading what ended up being a fairly innocuous if not misguided listicle I really felt, as a Plath fangirl, that I would have been the better person to speak for Plath, as if I was the one who was really possessed by her, and all these others — literary bigwigs: Winterson, Egan, et. al. — were phonies and hacks. Poet Anne Boyer writes on Hannah Arendt’s biography of Rahel Varnhagen, “I have an immediate reaction of horror, disgust, revulsion, etc., at the Arendt who has been possessed by another woman, who speaks with another woman’s voice,” and I wonder if that’s what triggered your reaction, Helen?

Jesse, I want to address your question about the radical potential of blogs that Kate Zambreno suggests (a suggestion that came up again recently in The New Inquiry). It seems that Zambreno’s great desire would be that women — artists, creators, women in general — no longer hide their mental illness and instead use it as revolutionary praxis. I’m familiar with the subcommunity of lit blogs that Zambreno inhabits, albeit more in a liminal capacity, and though I think that the new forms of vulnerability (also, are they new? or are they only just now being laid bare?) exhibited in these spheres is a terrifically interesting jumping-off point for radical new ways of seeing how women can be in the world, I feel that there is something that falls short, though I’m not sure what it is. (“Between the Young-Girl and the world there is a window. Nothing touches the Young-Girl, the Young-Girl touches nothing.” -Tiqqun). I am thinking about Jesse’s questions of community and whether this community does, in spite of all good intentions, obscure the raw, real lives lived, and I’m reminded of recent “Tumblr Girl” (see, I have to write this in air-quotes because I’m still not 100% sold on this idea of Tumblr Girl Radical, though I really want to be!) calls to abandon the very notion of community to begin with. I think there are some very powerful young thinkers inhabiting the Tumblr-sphere, most of them young women of color, but the Tumblr proclivity for liking and reblogging (“This.” “Yes, This.”) seems to often lend itself to a hive mind that does little for critical, radical thought.