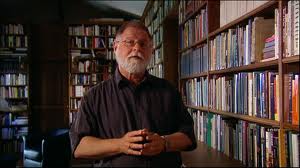 A post in which I construct a short interview about San Antonio’s new bookless library with “The Library at Night,” by Alberto Manguel, using only quotes from the text itself, which is a collection of Manguel’s musings on libraries ancient, real, and imagined.

ME: Hello, there. So glad you could take time away from dust gathering to talk with me. You see, I know it’s been some time since we first met, but when I first heard about San Antonio’s new all-digital, bookless library, I immediately thought of that last, rambling conversation we had over the course of summer 2009, only one year after your U.S. publication date, back when it first struck me that perhaps librarianship was in my future . . .

ME: Yes, of course! A question. I was just getting to that. Okay, so a lot of people are deriding this new library for its booklessness, calling it little more than an internet cafe (though it does lend e-readers). I want to avoid the whole value judgment debate about whether or not the reading of physical texts is more or less authentic than the reading of digital ones (IRL fetishism is so last year). But when last we spoke, the possibility of a bookless library had not yet crossed my mind and I bet it hadn’t quite crossed yours either. What do you think — is it a library without books?

LAN: In the seventeenth century, Gottfried Wilhelm Leibnitz, the celebrated German mathematician, philosopher, and jurist, declared that a library’s value was determined only by its contents and the use readers made of that contents (p. 91-92).

Despite Leibnitz’s contention that a library should be valued strictly for its contents, books as objects have often been granted spurious authority (p. 92).

ME: So, if readers are getting the information they need, then it matters not by what technology it is accessed. Right?

. . . the invention of photography did not eliminate painting, it renewed it, and the screen and the codex can feed off each other and coexist amicably (p. 78-79).

ME: You know, this all-digital library is being widely reported as the first of its kind, but according to an article on NPR, such an institution has in fact existed before, in Tucson, albeit only briefly. A number of university libraries have also followed suit more or less successfully. Sarah Houghton, director of the San Rafael Public Library in California, is quoted as saying that the Tucson project failed because it was “premature”, in part because “some people simply prefer physical media — they don’t want to read on a device”. Relatedly, David Streiteld argued in a recent New York Times article that, contrary to the popular belief that the sale of e-readers and physical books is competitive, the sale of e-readers suffers in the absence of physical books because “readers could no longer see what they want to go home and order”. I wonder if lending works the same way?

LAN: Both libraries — the one of paper and the electronic one — can and should coexist. Unfortunately, one is too often favoured to the detriment of the other (p. 77).

Every new technology has advantages over the previous one, but necessarily lacks some of its predecessor’s attributes (p. 321).

There is transformation and there is passage, but whether for better or for worse merely depends on the context and the observer (p. 232).

ME: A very reasonable answer. Indeed, the argument that both kinds of libraries should coexist is actually one of the strongest criticisms of the San Antonio library because it is being built in a community that is lacking a previously existing physical one. Web access is useful and important in any library, and though NPR reports that “in fact, improving technological access to lower-income areas of the predominantly Hispanic county is what led to Wolff’s bookless endeavor,” but reliance only on digital technologies for lending has proven inadequate because “many publishers don’t license to libraries, and those willing to do business often have what Houghton considers outlandish terms — too expensive or unrealistic for a library’s allowance.”

LAN: The Web will not be the container of our cosmopolitan past, like a book, because it is not a book and will never be a book, in spite of the endless gadgets and guises invented to force it into that role. Nor can it be in any useful sense a universal library (p. 228).

But the Web is an instrument. It is not to blame for our superficial concern with the world in which we live (p. 227).

Our mistake, perhaps, has been to look upon a library as an all-encompassing but neutral space (p. 108).

We dream of a library of literature created by everyone and belonging to no one, a library that is immortal and will mysteriously lend order to the universe, and yet we know that every orderly choice, every catalogued realm of the imagination, sets up a tyrannical hierarchy of exclusion. Every library is exclusionary, since its selection, however vast, leaves outside its walls endless shelves of writing that, for reasons of taste, knowledge, space and time, have not been included (p. 107).

If every library is in some sense a reflection of its readers, it is also an image of that which we are not, and cannot be (p. 107).

The weight of absence is as much a feature of any library as the constriction of order or space (p. 112).

ME: Speaking of space, what do you think of the design? It’s meant to resemble an Apple store.

LAN: Entering a library, I am always struck by the way in which a certain vision of the world is imposed upon the reader through its categories and its order (p. 47).

Commenting in 2004 on the usefulness of the Web as a creative tool, the celebrated American comic-strip artist Will Eisner explained that, when he first discovered this electronic medium, he believed it to be an almost magical source of new artistic inventions, but that of late it had become ‘merely a supermarket to which consumers come to look for the cheapest possible product’  (p. 227).

A library of straight angles suggests division into parts or subjects, consistent with the medieval notion of a compartmentalized and hierarchical universe (p. 138).

We don’t read books in the same way sitting inside a circle or inside a square, in a room with a low ceiling or in one with high rafters. And the mental atmosphere we create in the act of reading, the imaginary space we construct when we lose ourselves . . . is confirmed or refuted by the physical space of the library (p. 133).

ME: One more question. Sarah Houghton predicts it’ll be about 100-150 years before all libraries are digital-only. How do you feel about the future of The (platonic) Library?

LAN: Solid libraries of wood and paper, or libraries of ghostly flickering screens, stand as proof of our resilient belief in a timeless, far-reaching order that we dimly intuit or perceive (p. 322).

It is likely that libraries will carry on and survive, as long as we persist in lending words to the world that surrounds us, and storing them for future readers (p. 231).

The world encyclopedia, the universal library, exists, and is the world itself (p. 89).