Teaching in the Margins: Matthew Goulish 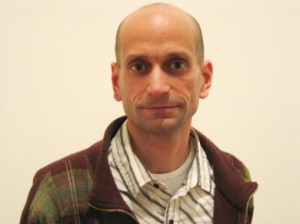 Whether by necessity, tradition or desire, it is a fact of our present situation that the arts have become intimately tied to education. With TEACHING IN THE MARGINS Full Stop seeks to further explore the implications of this reality, the ways the writing happening now is influenced and influences the teaching of reading and writing. Further, at a cultural and historical moment when funding for arts non-profits is increasingly being cut and University presidents are dethroned for not moving fast enough, the question is no longer should the way artists and educators operate change, but how?

With this in mind, we sent our questionnaire to writers and curators, academics and educators, with an eye open to the interface between innovative artistic practice and progressive pedagogies, taking stock of the untapped potential of these unconventional ways of knowing, discovering how art pushing borders creates new spaces for teaching and learning at the margins.

Matthew Goulish is the author of 39 Microlectures — in proximity of performance (Routledge, 2000), The Brightest Thing in the World — Three Lectures from the Institute of Failure (Green Lantern, 2012), and Work from Memory, a collaboration in response to Marcel Proust with the poet Dan Beachy-Quick (Ahsahta, 2012). He teaches writing at The School of the Art Institute of Chicago, received a Lannan Foundation writer’s residency in 2004, and shared the United States Artists Ziporyn Fellowship with Lin Hixson in 2009.

When I was in the third grade, Mr. Snow introduced us to set theory by enacting a pseudo-science-fiction scenario involving interplanetary travel. He prepared two chairs side by side, and placed a large stack of books on one of them. He said, “On this planet, the people have four fingers on each hand, so they have no digits larger than eight. They don’t have the concept of ‘nine.’ Counting to eight for them is like when we count to ten.” He then moved nine books onto the empty chair and said, “This is eleven books.” It was the planet of Base 8. Then we were off to planet Base 12. I think this happened a couple of years after Star Trek premiered (the original).

I remember he wanted to demonstrate several different counting systems, and he quizzed us as he went, but the clock was ticking, nearing 3:05. I had no idea why he would attempt to introduce such a complex concept so near the end of the day. It wasn’t the usual time for math, and he was not even our usual teacher. He was filling in, for some reason that I don’t recall, and he must have misjudged the time of the lesson. So the closer the clock ticked to 3:05, the faster he talked and restacked the books. (It was an unconscious demonstration of another mathematical concept: the asymptote.)

Somehow he concluded the lesson. He must have said something like — that’s the end, but really only the beginning. That was certainly true. I left the school to get on the bus with my mind reeling. The lesson in itself was fascinating, and suggested that the way we count here on earth is constructed, based on the semi-random evolutionary fact of our ten fingers, thus opening the door to other counting systems and set theories. But did that concept also imply that every question, every problem, is constructed in a similarly semi-random way, based on limits of consciousness of which we may be only dimly aware? One could in that case rethink the idea of a problem: not as a thing to be solved, but as a framework within which certain provable results and certain modes of thinking become possible.

More difficult to grasp than the mathematics, and more fascinating — if I could differentiate the methods of the teaching from the intended lesson imparted — was Mr. Snow’s deployment of narrative and performance. I would not call it theater; he never took on a character, never “acted.” He only demonstrated, as a mediator, with his set of objects oddly transformed by his demonstration, the chairs into planets, the books into pure quantities made physical. How had he conceived of this narration? We all knew this lesson issued straight from Mr. Snow’s mind, and that our textbooks had been entirely left behind. In fact, the textbooks had been relegated to objects in his performance.

Maybe because of that I experienced, for the first time it seems, the unsettling sensation of the teacher not entirely in control of the lesson. It was as if he was trying to keep up with it, like those moments in westerns when the horse bolts with the rider only half on the saddle. The lesson’s charged moments introduced me to a new kind of urgency, one that grew out of an uneasy relationship between the temporal demands of the day’s schedule and the experienced duration of learning. The first had pressurized and amplified the second. This introduced the power of structure. What happens when a lesson that easily requires one hour gets compressed into the last fifteen minutes of the day? That shift in procedure, that wrongness, electrified the material, conferred on it a significance that seemed in fact more true than artificial. Now the “normal” way of teaching this lesson was revealed to be entirely inadequate. The proposal was that the divided times of the school day were there to work within, to respect (Mr. Snow would never have considered going over time — that was out of the question), but to push against, as if to ask: what might fifteen minutes make possible?

I should mention that Mr. Snow was my first male teacher, a truly significant fact for a young male student. I had seen him walking the halls, and knew eventually, in two years, then in one year, he would be my teacher too. But suddenly he appeared, unexplained, in our classroom one year early. I wondered: Is this what school is like for the older kids? It was like looking into a window on the future.

Some thirty years later, after I had been teaching writing at The School of the Art Institute of Chicago for some time, I had a brief conversation with a student after a session of my Systems of Writing class. The visit of a curator who was something of a celebrity had generated a degree of excitement among the graduate students, who could sign up for one-hour studio visits. When I asked this student if she had signed up, her response surprised me. She said that unlike most everybody else, she was not a fan of the visitor, because she had witnessed his approach to teaching, and for her it was like “a train without a track.” Whatever subject he landed on, he would stay on until he had talked it out, regardless, she thought, of its appropriateness to the moment. Many students thrived on his articulate erudition, but for her it produced anxiety. Her comment stayed with me, and later in the day, the thought occurred to me that perhaps the reason this student had signed up for my class was my (until then unconscious) aspiration to teach as a “track without a train.” I had discovered, through years of profound influence by great teachers and colleagues too numerous to name here, that one thing I could contribute is clarity of structure, and how to harness the potentiality of the constraints of the classroom. Creativity thrives within limits, within the challenges that constraints pose, and the classroom offers a wealth of constraints. As a teacher, I saw my task as treating the classroom as a closed ecology, as devising the creative container within the classroom container, and proposing that as a set of challenges for the students — not so much to critique, or even to teach them about, their practice, but to challenge their practice in unexpected ways. The classroom and its community lend themselves to this reframing, and allow creative possibilities to emerge that are difficult if not impossible to recreate in any other setting. Now because of this student’s comment I began to think of those constraints as the track that I had to prepare, and then get off of, in order to allow the students to become the train.

I wonder now how much of that approach I can trace back to Mr. Snow’s breakneck lesson on Base 8. Episodes from his regular classroom, once I arrived in it, have not stayed with me as vividly as the memory of that first encounter. But I do recall a moment in the hallway, seeing another boy my age standing mesmerized in front of a radiometer on the windowsill. That is one of those science toys with a four-pedaled propeller with alternating light and dark surfaces inside a glass globe. On that sunny afternoon, the boy stared at the rapidly spinning blades. Mr. Snow approached and asked him whether he had figured out yet what made it spin. The boy said no, and Mr. Snow encouraged him to keep thinking about it. With a class as large as ours, he had taken the time to set up a lesson for just one student, the kind of lesson that could only happen, in fact, between classes, or in the margins, as it were. Because of the way our school was situated, direct sunlight came in only through the hall windows, limiting the lesson of the radiometer to those times when students moved between classes. Once again, this teacher had activated attention through the creative use of the limits of the classroom. Once again it seemed I learned something extraordinary from him — not about how the radiometer works, but about how to teach.