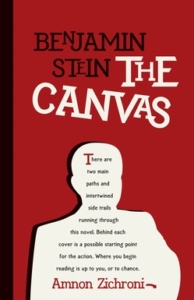 Tr. from German by Brian Zumhagen

Amnon Zichroni, a devout orthodox Jew and one of two dueling narrators in Benjamin Stein’s remarkable novel The Canvas, asks:

Why, for example, does Torah study for children begin with Vayikra, the third book of Moses, and not with the first? Children learn all the details about the offering of the sacrifices in the Temple, a bloody business, and barely comprehensible for five- or six-year olds. It would be more reasonable to start with the story of creation and the lives of our forefathers.

Eli, his study partner, responds that then “they would find out about Cain’s murder, Noah’s alcoholism . . . Lot’s incest with his daughters . . . [a]nd then it would be difficult for them to believe a certain interpretation of reality blindly, and they would ask questions from the very beginning.” Stein’s most basic point here is critical to an understanding of his own book: order of information matters, and the very notion of truth can be shaped by it.

Stein has written a novel that re-shapes itself upon each reading depending solely on the reader’s tack. The Canvas has two narrators, Amnon Zichroni and Jan Wechsler, whose stories corroborate, contradict, and eventually collide in the end. Or should I say middle — the physical book is actually bound with two independent and nearly identical covers, so the reader is free to choose where to begin. Whether you choose to  start with Zichroni’s or with Wechsler’s narrative largely determines which narrator gains your trust. (I chose a path at random — Zichroni’s narrative followed by Wechsler’s — the first time, and then read the book again in reverse order.)

Zichroni’s story is that of a book-obsessed young man attempting to distance himself from religious orthodoxy. He does, and becomes a noted psychiatrist. But he also believes himself to be a supernaturally gifted psychiatrist who can, by touch, experience a patient’s memories. Three patients prove to be his undoing; the most enigmatic of these is Mr. Minsky, the infamous author of a Holocaust memoir proven to be a fabrication. Upon touching Minsky, Zichroni becomes aware of the fabrication but also of how sincerely committed Minsky is to his “memories.”  He even comes to see Minksy as more of an artist than a charlatan.

Wechsler, on the other hand, is a newly orthodox Jew who shares the same name of the very man who enthusiastically took Minksy down and exposed his Holocaust memoir as an opportunistic lie. Or is Wechsler that Jan Wechsler after all? In the opening pages of Wechsler’s half of the story, a suspicious piece of luggage is hand-delivered to his home, suggesting he just might be the man who exposed Minksy. Wechsler himself isn’t sure.

A powerful and ambiguous showdown occurs smack in the middle of the book, when both narrators finally meet. A sort of metaphysical violence ensues.

The Canvas is loosely based on the account of Binjamin Wilkomirski, author of Fragments (1995), a tremendously popular Holocaust memoir; like Minksy’s story it was proven to be a fabrication. But when I say loosely based, I mean loosely: Wilkomirski and Minsky are more like ghosts at the center of this book. There is plenty of plot, to be sure — murder, intrigue, interrogation rooms, the inevitable double-cross, and exotic locales — and the pages turn like in a supermarket thriller (or at least one daring enough to substantively tackle the inexhaustible questions of God, death, and memory). The book is ambitious in scope: it is about religious orthodoxy and the transgressive power of literature; it’s also about collective guilt and national identity. Yet The Canvas is so particular in its details that it comes with a glossary appropriately placed in the middle of the novel.

Most disturbing of all, in a novel ultimately about the mutability of memory, are lines like this one from Wechsler: “Someone who stole other people’s identities wouldn’t stop short of murder.” Is this true? And if so, what does it say about Minsky or Wilkomirski? Are they killers at heart? And what of Zichroni, who steals the memory of his patients by touch alone? And what of Wechsler, the man who steals Minsky’s “memories?” Or Wechsler, who confesses: “I am what I remember. I don’t have anything else.”

A fabrication of character and memory, The Canvas is both a great novel and a genuine Holocaust testimony, in that it bares witness to the lasting power of trauma and how it shapes the strange and subjective mystery of human experience. It is an upsetting book, unabashedly philosophical, refusing closure, and challenging the very notion of truth by reminding us how much depends on perspective. It also happens to be playful, suspenseful, and one hell of a page-turner. I could not put it down. Both times.