I See You Face To Face: Walt Whitman and Walter White 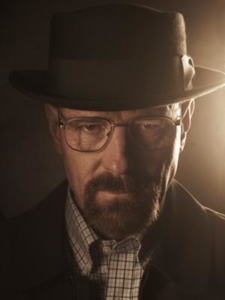 It makes sense for Breaking Bad to refer frequently to Scarface and The Godfather films. Both sagas of organized crime’s glory and ruin are already the kind of cultural touchstones Breaking Bad seems poised to become. It’s a little more puzzling for the show to refer to Walt Whitman. Whitman’s pithy humanism stands in stark contrast to Walter White’s gradual indulgence of his own will-to-power, and his insouciance towards the lives of others. But Whitman’s status as something morally opposite Breaking Bad is what makes his inclusion appropriate. Watching Breaking Bad in light of Whitman is to meditate on the American Dream through a glass, darkly.

Whitman’s America no longer exists, given the change that 170-odd years can wreak. Still, the American dream exists mostly unchanged. It is one characterized by abstractions like “liberty,” “equality,” and “opportunity.” Whitman’s simpatico values mean that he’s an American icon, just as timeless as Lady Liberty.

At the heart of Whitman’s poetry is an ultimate concern with the soul. “Song of Myself” is perhaps the best example — a 50-plus stanza celebration of the Platonic soul that serves as a manifesto for his humanism. All souls are divine, all souls are one, and all are one within him. In that sense, it’s an expression of a sense of kinship towards all other Americans for their shared American-ness: the Civil War, Lincoln’s assassination, and Reconstruction were identity-forming experiences for the country. While each of these events were experienced by the collective, in Whitman’s America one had the freedom to also experience these events as individuals (as if that couldn’t be done elsewhere). That America gave each eternal soul —  each soul being an extension of Whitman’s — the chance to realize oneself not just through grief but through the mundane was something truly remarkable and exceptional.

A fundamental assumption of Whitman’s was that America afforded its citizen a degree and kind of freedom which couldn’t be found elsewhere. He evangelized this ideology when he wrote in support of the Mexican-American war:

“What has miserable, inefficient Mexico—with her superstition, her burlesque upon freedom, her actual tyranny by the few over the many—what has she to do with the great mission of peopling the world with a noble race? Be it ours, to achieve that mission!”

The “mission” here — shadows of eugenics aside — is to spread the American divine to those without it. It’s not about God and is not an issue of divine right in that sense. Instead, Whitman’s ideas regarding the divine and the American are more mystical: his priorities lie with the soul.

Power doesn’t really come into play with regards to Whitman’s ideas about the soul’s journey. The soul evolves naturally, through life and after death, as Hank finds out in Breaking Bad while reading Gale Boetticher’s copy of Leaves of Grass on Walter White’s toilet:

Gliding o’er all, through all,

Through nature, time, and space,

As a ship on the waters advancing,

The voyage of the soul – not life alone,

The soul moves and is moved by life itself. In light of Breaking Bad — specifically Walter White — it’s a quaint idea. Breaking Bad is a sharp rebuke of the eternal, and its implications toward American-ness. Though circumstances beyond White’s control created the conditions for the show — Walt’s cancer, the recession — Walter White blights his soul with the choices he makes. By the end of the fifth season, after having killed or conspired to kill strangers, colleagues, and enemies, poisoned one child and covered up the murder of another, choosing meth-cooking over the family he initially swore to support, then turning half of suburban Albuquerque into a floating meth lab, he’s a husk.

Eternity seems inconsequential to White in the face of that much death, especially after he dissolves most of these bodies in acid to avoid leaving a trail. As he’s dumping Emelio’s remains into Jesse’s toilet (“And the Bag’s in the River”), the scene flashes back to a grad school experiment where he broke down a human body into its elements (presumably in a less grisly way than the show has accustomed us to). “There’s got to be more to a human being than that,” he remarks. It turns out, there’s a percent of a percent of humans that isn’t chemically accounted for. But White is obsessed with chemical yields and end results, so that small amount — the soul, presumably — doesn’t count for much.

Part of the reason Walter White has insinuated himself into the cultural lexicon is that his story is so American. In today’s decrepit job market where a Bachelor’s degree gets you about far as a High School diploma/GED used to, it makes sense that the Southwest’s biggest meth cook is wildly overqualified (Caltech, Nobel research). He’s an outlaw like Jesse James, and he pulled himself up by his bare wits the way that our grandparents did (though I think it’s fair to say that Walter White is smarter than most of us). Walter White is a self-made man, and he has the swagger and a pile of money the size of a pony car to prove it.

But Walter White’s American Dream exists outside of the American legal system, which is hardly unique to tales of organized crime. While he embodies the kind of rugged individualism that the Right tends to froth over, it’s tacit among people that buy into the Dream that the greatest Americans played by the rules. No one that literally got off on doing things just because they’re illegal (see: Walt and Skylar turning her wood-paneled station wagon into their own private Xanadu in the parking lot of a school during a PTA meeting) can enter the pantheon.

There’s something preternaturally vengeful about Walt, from his preoccupation with illegality, to the way his meth business becomes some sort of counterweight to the promise he squandered — that he feels was taken from him — as a legit chemist. Whitman’s America, however capriciously, was one of altruism: his poems professed a love of everyone, since after all we’re made of the same stuff. Walter White knows that for sure, but he also knows that it doesn’t count for a thing. He lives for and believes only in himself.

“When I sitting heard the astronomer […]

How soon unaccountable I became tired and sick,

Till rising and gliding out I wander’d off by myself,

In the mystical moist night air, and from time to time,

Look’d up in perfect silence at the stars.”

Gale goes as far as telling White that what the two of them do is “magic.” White agrees with Gale, but his actions for most of the series give him away: all of his tricks come from his command over the physical world (the viewer’s suspension of disbelief aside), not some communion with the supernatural. Walt respects chemistry above all else, which isn’t quite the same as marveling at it. He wants to bend it to his whims. Walter White probably would have gleaned all he could from the Learned Astronomer, then killed him and dissolved his body in a barrel of acid.