I’ve Been Thinking About Phil Ochs 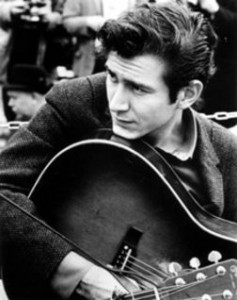 On July 11th, Flavorwire ran an article by Tom Hawking with the self-explanatory title, “The 10 Worst Political Songs You’ll Ever Hear.” They include songs by Bright Eyes, System of a Down, The Cranberries, and others. He writes that “Give Peace a Chance,” “has everything to do with sloganeering and nothing to do with reality. It’s a song to sing to make you feel like you’re doing something when you’re not doing anything.” In the span of the article, he manages to highlight and eviscerate the juvenile quality of a lot of topical pop. I don’t know what necessitated Hawking’s writing of the article, but he managed to articulate why I tend to shy away from pop music that touts itself as “political.”

Plenty of political pop music smacks of opportunism, caprice, or oversimplification.  Generally, pop songs are often two-dimensional line drawings: never anything more ornate. Most pop musicians have the sense to avoid the topical in their songs — case in point, the Pitchfork Festival came to town last week — but in doing so they consign their work to the realm of the emotional, the personal, the timeless. And there are fine lines between timelessness and delusion, the timeless and the anachronistic.

Occasionally, songwriters manage to write explicitly topical songs with that elusive combination of sincerity and grace. Woody Guthrie, whose 100th birthday was earlier this month, was among the first, and his still songs stand up. It’s tough to name one now, which may be why Occupy had a tough time finding a soundtrack. As far as the sixties and seventies go, Randy Newman comes to mind, as does Tom Paxton, but Phil Ochs is a more arresting example.

Ochs’ songs were singularly topical: “I Ain’t Marching Anymore,” “Crucifixion,” “Talking Birmingham Jam,” even “Outside Our Circle of Friends” saw Ochs reacting to current events. But he did so with one eye on his subjects, the other on his craft. That his songs date themselves but retain their pathos is remarkable. The last bit of “I Ain’t Marching Anymore” comes after his outcry against the atomic bomb, westward expansion, and WWII: “Call it peace, call it treason / Call it love, call it reason, but I ain’t marching anymore.” Ochs shows his hand here, plainly stating his point without tethering it to particular events. It’s what makes this song something a little more nuanced than a garden-variety anti-war song.

Of course, Ochs wasn’t the only folkie in Greenwich Village writing topical songs. Bob Dylan was there, tearing chapters from Woody Guthrie’s book, which meant writing political songs. But Dylan’s songs weren’t as specific or as vitriolic as Ochs’ —- Dylan is cryptic and imagistic in a way that plenty of his songs could have been about any number of different things (“Talking John Birch Society Blues” is a notable exception that proves the rule). His choice to be so ambiguous means that his songs can withstand the test of time as Ochs’ era — the same one as Dylan’s — stamps his work.

Ochs’ songs are marked indelibly by the dashed hopes that defined his 1960’s and ‘70’s (the Kennedy deaths, the Chicago DNC, Dr. Martin Luther King’s assassination), but some of his songs haven’t tarnished. “Love Me I’m A Liberal” is a seething attack on the prejudices of the liberal establishment, along the lines of Richard Wright in Native Son. Ochs and Wright both recognize that meaning well isn’t enough: without the proper actions, meaning well is simply condescension. It’s tough to find that acute a criticism not just in pop music, but in songs in general. And that he levied this claim on to the Left — his Left — makes it that much more singular.

It’s tough to say if a figure like Ochs could exist now. Stylistic irony* (i.e. anachronism) has become a hallmark of the sound of the last decade; one aspect of this sound is a lyrical tendency to romanticize or even mythologize oneself. In his own way, Ochs is guilty of it too: in There But For Fortune, friends and family mention that Ochs wanted to be a cross between John Wayne and Elvis, both folk heroes of the entertainment industry. That fantasy imploded as Vietnam ended and “there were no more dragons left to kill”; Oakes took his own life in April of 1976, three weeks before the first anniversary of the official end of the conflict. Still, Ochs’ music is predicated on unselfishness: he often uses the first person, but only to explain his personal relationship to his own time, and by extension to his listeners. It might seem out of place in an idiom that’s become preoccupied with inter/intrapersonal relationships, and the abstract life of the mind. It might also seem refreshing.

*As opposed to Ochs’ rhetorical irony, like in “Love Me”