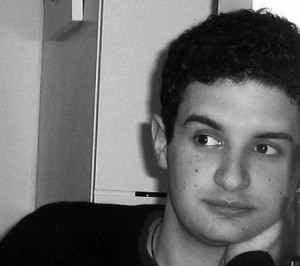 Not long ago I went to a reading at KGB Bar by Daniel Levin Becker, the youngest member of OuLiPo (Ouvroir de Littérature Potentielle, that French workshop of language- and math-obsessed “rats who build the labyrinths from which they plan to escape,” peddlers in constraint, creators of “potential literature”). The Oulipo has 38 members, including internationally celebrated writers such as Italo Calvino, Georges Perec, and founder Raymond Queneau. Even after their deaths, members retain their membership, so even though those three authors are no longer of the living, they remain on the roster — as does the one fictional member, QB.

The Oulipo is a hard group to pin down. In fact, it takes a book-length exploration like the one Becker provides for us in Many Subtle Channels: In Praise of Potential Literature, to really understand the various “channels” potential literature can take. No two members share the same views or explore the same terrain; as Becker writes in his book, “No single person embodies the workshop perfectly, or ever will . . . It is large, it contains multitudes. As of this writing, it contains thirty-eight of them.”

At KGB Bar, Becker read from an early chapter in Many Subtle Channels, one of the first books aimed at an American audience that attempts to explain the workshop in a way anyone can understand. After reading a section where he describes four active Oulipians, he opened the floor to audience questions. One onlooker shouted, “Is there a secret handshake?” To which Becker replied, with mock shifty eyes, “Maybe . . .”

I later shook the hand of this Oulipian, though our handshake was not a secret one. We then proceeded to chat about his entrance into the ranks of the Oulipo, his new book, and his thoughts on “the sort of literary supper club,” old and new.

Tyler Malone: You obviously talk about this a lot in your book, but for our readers: share, if you could, by way of introduction, how you got involved with Oulipo.

Daniel Levin Becker: I discovered it in a French lit survey course in college, where a Perec story was on the syllabus and the professor mentioned, to my immediate enchantment, that Perec had also written a 300-page mystery novel without the letter “E” [translated into English as A Void]. (I had already read at least one Oulipian book, Italo Calvino’s If on a winter’s night a traveler, and a handful of other works that have an Oulipian vibe, without knowing the Oulipo existed; to seal my fate, I had also made a mixtape whose artist names and song titles didn’t contain the letter “E.”) That kicked off my fascination with the group, but I didn’t really act on it until my senior year, when I did an independent study on the Oulipo. The professor who supervised that work also put me in touch with the Oulipians to support my application for a research grant — thanks to which I ended up working in Paris for a year as the esclave de l’Oulipo, as you know, and getting to know the active members.

Yes, before you were a member, you went through a period where you were the esclave de l’Oulipo (“slave of the Oulipo” — like Paul Fournel before you). Your task was to help in cataloging their archives, but did your “slavery” involve any odd jobs or strange tasks in addition to your archival duties?

I also helped prepare the Oulipo anthology that Gallimard published in 2009, which involved mostly transcribing texts that were too old to exist in digital form, and a minor but thrilling component of curation (for instance, I got to pick roughly a dozen of Queneau’s 99 “exercises in style” to include). I can’t remember any other demands they made of me, although I did help Frédéric Forte move at one point. But I probably could have declined to do that.

One of the funniest moments in the book is when you explain that “membership is permanent.” Could you tell me a little bit about that, and the only way to officially leave the group?

Dead members are still counted on the Oulipian roster; according to the group’s bylaws, the only way to be excluded is suicide, with the express purpose of leaving the Oulipo, in the presence of a notary (or a bailiff, depending on your translation). Vaguely related is the rule that anyone who asks to become a member is thenceforth inadmissible for life.

Two of the words that stick out to most people when learning about Oulipo, and certainly stuck out to me as I read your book, are “constraint” and “potential.” You quote Perec explaining, “I set myself rules in order to be totally free.” While the freedom of constraints may seem counter-intuitive to outsiders, how do you see Oulipo situated between these poles?

A quick summary of the philosophy behind the whole thing is that writers (or creators of any kind) are always constrained by something — medium, convention, circumstance — and that it’s possible to circumvent those boring constraints by focusing the mind on different ones, ones that are shallow but difficult. You’re not worried about how your handwriting looks while you’re solving a math problem, that sort of thing. But an important distinction, which I think is where the “potential” part comes from, is that the Oulipo has no interest in telling you which constraints you should focus on, or even that you should focus on constraints at all; it’s just a group of people who find doing so useful or stimulating or therapeutic, for reasons of varying psychological depth.

What kind of constraints have you placed on yourself when writing previous works, or in the writing of this book?

That’s for me to know and for you to conspiracy-theorize about. But I will tell you that I had an informal rule whereby I would liken each Oulipian to an animal that he or she resembled. I didn’t follow through, but a few traces remain.

I know there are many varying opinions amongst the members of Oulipo about where it should go and how public it should be and whatnot. Was there any negativity from within the group about the idea of you writing and publishing this book?

No, the clandestine vibe is pretty much a relic of the first decade; I think by now everyone in the group has made peace with the idea of the Oulipo being a public entity (there’s one exception I can think of, but talking about it would obviously be a dick move on my part). At this point there’s an Oulipo website, and several collective publications, and a jointly authored memoir collection, and even a documentary, so I felt the coast was pretty clear when I set out to write the book. And I’m not aware of anyone being particularly nervous or peeved about my intention of bringing the group’s work to a broader and less academic/erudite audience than the community that’s been aware of it so far, though I can imagine some of the founding members would have had their reservations.

It seems to me that the other dilemma that you expound upon is the idea of whether to “show the scaffolding” — whether to explain the Oulipian constraints behind a text. Various members believe different things on this point. Some give away their method outright, whereas others remain mum even decades later. So I know Oulipo doesn’t have a definite decision on this point, but I’m curious what your opinion is? (Though perhaps you’ve already implied it with your earlier answer: “That’s for me to know and you to conspiracy-theorize about”?)

It’s a cop-out, I know, but I think it depends on the text and how the author is approaching it and what he or she is expecting from the reader. You can read a Mathews novel without any inkling of what the constraint is, or even that there is one, and still have a great time, and that’s because he doesn’t want your reading experience to be dependent on your understanding of something external to the story. (But then someone like Jacques Jouet would argue that the scaffolding isn’t really external at all — look at Perec’s “E”-less novel, which actually tells the story of a world that’s constrained in the same way as the book — and that it’s cheating the reader to expect him or her to go without that information-prosthesis unless you’re pretty confident it’s too obvious for them to miss, etc., etc.) Anyway, I’m talking in circles — I’m pretty agnostic on this question.

When talking about a workshop by Benabou, you write: “His workshop feels at times like the place where he gets to teach us the Oulipo as he remembers it, before it evolved to attract people like us.” As I read your book, I got a similar sense — that is that in your writing I felt a nostalgia for an Oulipo before it evolved to attract people like you / like the others at the workshop / like people all over the world now interested the project. Would you say that’s true? Not that you aren’t excited for the future of the group, but do you sense an undercurrent of nostalgia in your writing and in yourself for the Oulipo of yesteryear?

Hmm. Not consciously, but it’s interesting that you do. No doubt it would have been exciting to be involved with the Oulipo (or, for that matter, a sentient being) during the fifteen years or so where the group’s literary output was really vigorous and Perec and Calvino and Mathews and Queneau etc. were all consistently killing it — but I haven’t given much thought to whether I’d actually prefer that to the present. To my mind, the fact that the group’s ideas are a lot more open and public nowadays is a unilaterally good thing, and that’s about as much thought as I’ve given it. Until now.

Speaking of nostalgia for the old Oulipo though: if you could have one day with one dead Oulipo member, who would it be and what would you do?

I think I’d just follow Perec around for a day. Maybe we’d go typewriter shopping or something.

What’s one of your favorite Oulipian forms?

The chicago is pretty delightful, and not only because it’s named after my hometown.

What five Oulipian texts would you recommend to an outsider who has never read anything by any of the Oulipo members?

1. Harry Mathews, “35 Variations on a Theme from Shakespeare”
2. Italo Calvino, If on a winter’s night a traveler
3. Georges Perec, Species of Spaces
4. Ian Monk, “Our Why and Our Where and Our How”
5. Anne Garréta, “On Bookselves”
(Numbers 1, 4, and 5 are in the Oulipo section of McSweeney’s #22)

What are you working on currently? What’s next for you?

Currently working on a translation of Perec’s La Boutique obscure, a dream journal he kept in the late ’60s and early ’70s. There’ll be another book at some point, surely, but I’m not sure what it is yet. Also, in the more immediate future: a nap.