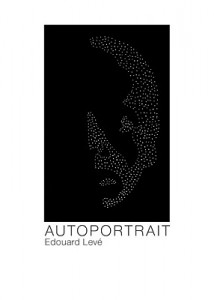 Edouard Levè pulled no punches when titling his books: when you open one, you know what you’re getting into. When you pick up Suicide, you know you’re reading a book about suicide. Conversely, with Autoportrait you can expect just that. Although in English “autoportrait” would have been “self-portrait,” translator Stein decided to maintain the original for its resonances; the auto- prefix — from the Greek autos for self  — comes with the connotation of self-reflexivity (e.g. auto-mobile, auto-focus, even auto-biography), and it underscores the entire work. Self-portraiture is necessarily self-reflexive and reflective, but it can’t exist in a vacuum; it’s beholden to context. Looking at a given artist’s self-portraits over time, it’s impossible to focus on the changing image of a self, without wondering about the forces that changed that person. Vincent Van Gogh comes to mind, before and after cutting off his ear.

Levè bucks this mentality; Autoportrait is a static portrait. Levè tenaciously avoids narratives: there are no pithy anecdotes, there is no character arc, there is only a first page and a last page. The book consists of a string of declarative sentences, nearly every one an “I” statement, as in, “I am inexhaustible on the subject of myself.” Or: “I feel apprehensive before conversations that have a fixed duration.” Or, most telling: “I don’t really listen to what other people are saying.” The effect is stark — it’s the textual equivalent of a photo portrait against a blank backdrop. Levè was an accomplished photographer, having published three photography books in his lifetime, so he was no stranger to the power of a singular subject. But the effect doesn’t translate, at least not in Autoportrait. That we don’t have that visual aid of the blank background means that it’s Levè against a Levè backdrop. This narrow focus and Levè’s secco prose often make for a tedious read.

If context lends an added dimension to our line of sight then Levè — or his textual surrogate — is a man without context, cursed with the inability to see past his own experiences. Though it’s admirable that he’s up front about his unfamiliarity with an uglier side of life, his indulgence in this inexperience precludes compassion. Like Narcissus, he’s bound and consumed by his own reflection. There is indeed a world around him – Levè is hardly delusional – but in Autoportrait it exists only in the abstract.  The result is that Autoportrait takes on a clinical tone. Feelings become facts rather than sensations. Statements like “I am happy to be happy, I am sad to be sad, but I can also be happy to be sad and sad to be happy” seem like observations: nothing more.

Levè’s detachment is all-consuming: reading Autoportrait is to come face to face with a life distilled to only facts. Sensations, experiences, and relationships can have a connective power, but in reporting them as unadorned information Levè rejects the idea that life announces something beyond itself. It’s a romantic notion, one that in spite of himself he can’t endorse. Instead, these aspects of life announce nothing. He presents his own case as Exhibit A: in the unilateral summary of his life and being, Levè announces only himself. It’s hardly empowering, though; he treats himself as a subject to be captured honestly, but in doing so he removes himself from the equation. As a result, we see a self-portrait of a man estranged from himself.

Levè’s self-possession is pathological, but Autoportrait is most compelling when we catch glimpses of a man trying to break out of this mindset. At one point, one of the most candid here, he writes: “I like meeting new people when I travel: these brief and inconsequential encounters have the thrill of beginnings and the sadness of separations.” At another, equally candid: “Contradicting myself brings two kinds of pleasure: betraying myself and having a new opinion.” But those moments are few and far between: they have to contend with a very real apathy, and ultimately they can’t win. Levè’s autoportraiture is a curse, a waking purgatory that he acknowledges but is mostly powerless to change.

When I covered Levè’s Suicide for this website in May, I wrote in so many words that any reading of Suicide must take place within the context of his 2007 suicide. The same goes for Autoportrait (despite the fact that it was originally published in 2005). If we’re to believe that Autoportrait is indeed an earnest one of Levè, then it’s hard not to look for clues as to the inner workings of someone who would go through with suicide.  As self-contained and self-reflexive as Autoportrait is, it’s ironic that the primary lens for reading it comes from without.

It’s easy enough to take life for granted, until you figure that it’s guarded by death. Reduced to fact, much like Levè has done, it doesn’t seem like much. Suddenly, death doesn’t seem so intimidating. Make no mistake — I don’t mean to interpret Levè’s suicide strictly from Autoportrait. But the rhetoric follows, and it’s terrifying.