From Combray to Hollywood: Remembrance of Cakes Past 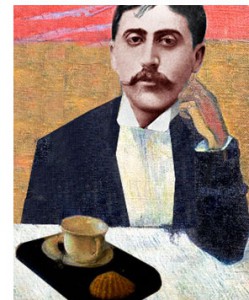 There is a section in Swann’s Way, the first volume of Marcel Proust’s In Search of Lost Time (or Remembrance of Things Past), in which the narrator describes a strange effect that the taste of a madeleine cake dipped in tea has on him:

An exquisite pleasure had invaded my senses […] at once the vicissitudes of life had become indifferent to me, its disasters innocuous, its brevity illusory […]

Now, either this guy really likes cakes or there’s something else going on here. The taste of the madeleine has become the key which has opened up a previously locked memory. It is a childhood memory of when he would visit his aunt on a Sunday, and she would give him a madeleine dipped in her tea; a memory which he had completely forgotten until now. The narrator expresses this as an amazing, absorbing revelation of something which had previously been shut off to him. Much more poignantly, he also expresses the way that this newly-unlocked memory makes him yearn for the simplicity of childhood with its uncomplicated pleasures and sureties. In a sense, the madeleine allows him to experience that childhood happiness again for a brief moment.

Proust’s work is often seen as very heavy going, complicated and philosophical. However, the core themes in In Search of Lost Time of memory and childhood are very accessible ideas, since nearly all of us can recall fond childhood memories of some kind. They are personal to us and clearly to Proust himself, but they are also universal.

In fact, the above extract, written by a Frenchman before the First World War, has an interesting echo in an American Hollywood film of the 1990s. Quiz Show, directed by Robert Redford and starring Ralph Fiennes and Paul Schofield, contains a scene where Charles Van Doren (Fiennes), consumed by guilt and obsessed with ideas of betrayal due to his having cheated on a very high-profile TV quiz show, returns to his parents’ house and attempts to recapture the innocence and happiness of childhood in much the same way that Proust’s narrator did:

To me, this is a wonderful example of how two seemingly disparate “texts” can be linked together across time, and can express the same core idea in strikingly similar ways. It can be great fun looking for these textual similarities in works created in radically different times and mediums. It is not usually the case that the latter work was influenced by the other (though doubtless this happens) but more that they both express a universal, timeless and recurring theme.

Never underestimate the importance of cake…