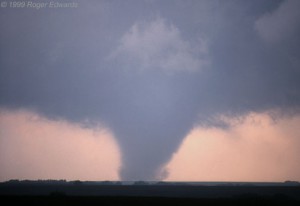 My earliest memory of a fake tornado is watching the beginning to “The Wizard of Oz”, in which the black and white sky becomes more black than white, and the wind works itself up into an almost comical crescendo, until the coming of the actual funnel cloud. Chickens cluck and horses neigh. The wind, which grows stronger and stronger, picks everything up and swirls it in a slapstick funhouse chaos. It almost looks delightful. What a great doorway to pass through into another world — a world that Dorothy wasn’t nearly appreciative enough to be romping through, I thought. Kansas without the tornado looked more hellish.

My earliest memory of a real tornado was during first grade. It had rained all morning — not hard rain, but steady sheets. It’s always hard for me to be anywhere but home when it’s raining out. It doesn’t feel right to be stuck in a classroom, in an office, in a car. I need to be on my own bed with my own books. And so I spent the entire morning staring into the gloom.

Around lunch the rain stopped. The darkness lifted and the sun shone down, but through a green muddy lens, like a dirty emerald. Everything was still. No chickens would have clucked. No horses would have rolled their eyes back and stomped around. It was like the atmosphere itself, the moisture and its weight, held everything down and closer to the earth.

Including us. Because we were rushed out of the classroom, away from the giant wall of windows facing north, and brought into the flourescent haze of the hallway, where we were ordered to curl up with our heads tucked in between our knees and our hands protecting the backs of our necks. Maybe we were down there for ten minutes. Maybe an hour. Maybe three days. Maybe seventeen years.

When we went back into the classroom the green had gone and the tree branches were shaking again and swaying together in a reassuringly familiar way. Even more than being scared, I remember being disappointed in how fake Dorothy’s torando was. How silly and — although I wouldn’t have had the vocabulary to call it this at the time — how mechanical and deus ex machina it was. In real life the tornado itself had turned out to be Oz. Strange and alluring and powerful and violent.

This notion was confirmed years later when, while driving with my family through Kansas on the way to Denver, I saw two tornados from the highway. Unable to stop the van, I peed into a BigGulp cup and dumped it out of the window. No wizards or witches or emerald city. Just a cup full of piss and a highway falling into disrepair.