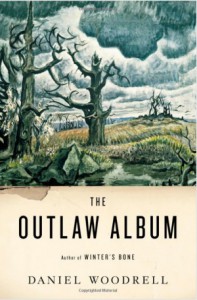 The opening stories of The Outlaw Album are fairly disturbing. These characters live in a liminal world between humanity and animality—it’s a world of random cruelty, unresolvable loss and loneliness, poetic revenge and equally poetic semi-articulacy. Woodrell’s writing is spare and almost painterly. It fills in with image what it leaves unsaid in dialogue and plot. It’s romantic-existentialist—a collection about exquisite but understated suffering at edge of the human terrain and wildness.

The murders and rapes in the first few stories aren’t excessive in their detail, but the detail there pierces the consciousness and lingers. In one, a girl takes violent revenge against her evil, rapist uncle, making him into her “baby” in a vegetative state; in another, a father wonders silently, alternately rageful and resigned, whether it was a stranger or someone among his aquaintances who kidnapped his 16-year-old daughter. As the stories get longer, they get lusher, more varied in their settings—both in temporal and psychic landscapes—and more nuanced in their exploration of arbitrary suffering. They are always restrained in their portrayal of pain, if not in the amount of suffering they portray.

In one my favorite stories, “Black Step,” Darden, a young veteran of the Iraq war is at home with his dying mother when a storm pushes a cow into a tree hanging off a cliff. The story organizes the narrator’s flashbacks, both of war and of his father’s suicide, around the cow’s distress, the shooting of the cow, the eventual burning of its carcass. The conversations are elided, real communication happening, when it does, below the level of speech. Darden describes a conversation with high school friends, detached:

It takes only five minutes together before they lean close and ask the standard ghoul questions I expect from civilians, and I answer, Oh you damned straight I did.

Then, Maybe more’n used to ride our school bus.

Then, Sometimes all you can do is shovel red sand into a body bag and send that home with a name on it.

Moments of vitality in the story come when Darden is alone with the dead cow, observing the richness of death’s presence in the world. The story ends with him and his mother watching the cow burn back into the dust of the earth:

Hooves cracked in the heat. Full dark made fire seem the center of all things. A breeze raised little flames that wiggled in the eye sockets and stuck a long tongue of fire lapping from the mouth. Ma’n me stared silently ’til the tree frogs went quiet and owls came out to fly. We left the cow at peace finally in the embers, started toward the house, walking slowly through the spreading weeds of our garden plot where nothing got planted this year.

It can be hard to read keep reading stories that end in this kind of nihilistic static. I’d be hard pressed to say what these stories are about, exactly, other than random cruelty and powerlessness. I felt that hesitation every time I started another of the stories in The Outlaw Album. But with every one, I found myself quickly and completely drawn in, my awareness of my own world completely surrendered to what the narrative gave me. That experience isn’t all that common.