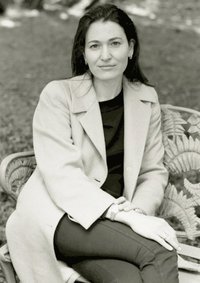 I first encountered Nicole Krauss’ work when a section from her most recent novel Great House (W.W. Norton & Co., 2010) was printed in the New Yorker as the short story “The Young Painters.” In this excerpt, the writer Nadia—one of four narrators in the novel—becomes fascinated by a painting on the bedroom wall of a dancer friend of hers. She glimpses it on the way to the bathroom during a dinner party, and when she asks about it later, the dancer produces a haunting story about the artists, two children whose strange and inexplicable death obsesses Nadia until she turns it into a short story and can let it go.

The passage quotes Henry James’ marvelous essay “The Art of Fiction,” a vindication of the novel, in which he defines the imaginative powers of the novelist as the ability to pass by an open door and intuit from the fragment of what can be seen an entire, fully formed reality. If the allusion evokes the brilliance, daring and verve of Krauss’ fiction—her characters seem instantly alive, her prose effortless—it also suggests the experience of the reader as one of falling totally in thrall to something overheard. The characters in Nicole Krauss’ novels are always reading each others’ diaries, letters, unpublished manuscripts, betraying each others’ privacy out of a desire to connect, but also out of that insatiable curiosity that demands that we follow a story through to the end, that we keep going deeper, even at the risk of transgression. If you love Krauss’ novels as much as I do, you know that reading them affords precisely this kind of pleasure: they are necessary, addicting and wholly satisfying.

I corresponded with Nicole Krauss via email about Joseph Brodsky, her literary influences, and structure and meaning in Great House.

You studied poetry at Stanford with Joseph Brodsky. What was that like? Do you think Brodsky had an influence – direct or indirect – on the kind of novels you write now?

I never formally studied with Brodsky. He came to Stanford for a week of lectures and readings, and I met him then, soon after I started my freshman year. I attended a lecture he gave on Auden and Eliot; I’d never heard anyone talk about poetry the way he did. Foolishly, I wrote him a letter and enclosed some of my poems. He called me the next day, we met up, and that day we spoke for eight hours. Afterward, walking back to my dorm, it felt to me that before those hours I had been going along in my life in one way, but afterward everything had changed for me. Over the the next four years, until he died in early 1996, we exchanged letters and met from time to time when we were in the same place. I sent him my poems, and he would rewrite them on his typewriter and send them back with a letter, explaining what I ought to be doing differently. He never spared me—he could be brutally frank and wickedly funny, and of all the poems I ever showed him, he only ever told me that one of them was good—but he taught me more about writing than anyone else, and was enormously generous to me. In fundamental ways, I learned from him about the kind of spirit one ought to strive for. I never had any other writing teacher or mentor after him. To some degree, I’ll always feel that I disappointed him by becoming a novelist.

Of your three novels, The History of Love stands apart because it’s so funny – whereas Great House really isn’t funny at all. Why is humor important for one novel and not another?

The History of Love is funny, but Great House isn’t humorless. It’s just written in a different key. Laughter was a good way to arrive at certain places that I was drawn to when writing The History of Love, some of them quite melancholy. Laughter can often reveal, but sometimes it can obscure, too. Writing Great House, I found myself drawn to characters engaged in an interior struggle with themselves—their doubts, regrets, failures. Their monologues are confessional, and they reveal themselves in very stark ways. I didn’t want anything to obscure or temper that exposure.

You could call The History of Love an American Jewish novel, and both History and Great House novels about twentieth-century diaspora. Do you think of these as “Jewish novels” or yourself as a Jewish writer?

I don’t wish to think of myself, or my work, in such a narrow way. Like every writer, I was raised in a certain atmosphere, the qualities of which I know intimately, and which, steeped in memory and experience, are rich material. I don’t have the urge, for the time being, to go looking elsewhere, and it’s true that I find Jewish history and life to be particularly ripe for the novel: both are highly attuned to doubt, uncertainty, and ambiguity (none of which are very comfortable positions), but also to passion and verbal energy. But luckily, novels can’t help but apply to all of us. The more intimately a novel explores an individual existence, the more it seems to tell us about ourselves.

I have no plans when I start a novel. In fact, for a long time there is no novel, just an effort. I write, but none of it feels necessary to me; I start and abandon many things, sometimes all in one day. Then one day I stumble onto something—usually a voice—that feels alive to me; that feels urgent, and in which I sense that something important is at stake. Once I happen onto this liveness or fullness in one place, I begin to find it in others. Soon it seems to be everywhere. And then I’m writing a novel.

When I think about structure, which to me depends so much on rhythm, I always imagine it in either architectural or musical terms. Baroque music—I’m thinking especially of Bach—often combined three or even four distinct voices into a whole without dissolving each. I like to disorient myself in my work, to become lost, in order to arrive at the unexpected or unknown. I find that it’s harder to do this in a more individualist form—a single story line based on progression, climax, and reconciliation. In general I find that sort of structure more restrictive, less flexible and open.

The narration of Great House develops in four voices, each a kind of confession, and there are further voices and stories pocketed in those main voices. But the voices reflect, echo, dovetail, refract, and form symmetries with each other, creating a large interlocking structure with, I hope, many dimensions. I was interested in sustaining the separation between the voices, but at the same time my sense of the wholeness of the novel, its coherence as a unified story, however complex, was always the overwhelming force in writing it. Perhaps a way to think of it is as a large house where one dwells in many rooms, enters through many doors, follows voices down corridors, looks out through windows, before one is allowed, in the end, to see the house from the outside. That, anyway, was my experience in writing it.

The History of Love and Great House could both be described as meta-fictional, and I know you cite both Borges and Calvino as influences on your work. What draws you to these techniques? What is it that the story-within-the-story can do that the plain old story can’t?

Did I ever cite them as influences? I don’t remember suggesting that; only that I read them with enormous pleasure when I was young. You can’t pursue the Calvino road very far without becoming ridiculous and/or writing a knock-off of Invisible Cities. Even Brodsky, who first gave me the book to read, told me that it was the kind of book one kicked oneself for not having thought of writing oneself. Borges is different, it’s true. He influenced everyone, even people who’ve never read him.

I’m not necessarily drawn to the story-within-the story, per se. But I am very interested in structure and composition, in the way that stories and voices and lines of thought can be organized to create meaning. Think of the metaphor, which one might call the basic unit of literature: a metaphor juxtaposes two separate, unique things, and by doing so creates unexpected clarity and meaning. We love metaphors because they give us the feeling that the world is unified or connected, that there is an underlying relationship between all things that we sense but can’t always name or describe. Well, when one juxtaposes different voices or storylines or forms within a novel, the effect is the same. Echoes, allusions, and patterns emerge, often in a very subtle and elegant way. For now, that way of creating meaning feels more authentic and natural to me than any other, as it allows for great complexity, relativity, and ambiguity.

There’s a moral dilemma at the center of Great House – that all art is created at the expense of others or on the graves of the dead, that art is complicit in suffering and violence. Nadia puts writing on trial, whereas Lotte Berg writes a story about an architect who turns a blind eye when Nazis use his park to bury the people they have murdered. Do you find yourself negotiating this dilemma yourself when you write?

The dilemma you describe is not at all at the center of the book, actually, and it would be a misreading of the book to take from it the idea that ‘all art is created at the expense of others or on the graves of the dead.’ Art is not an act of vampirism. On the contrary, literature is a deeply empathetic gesture—where else in life are we required to so fully inhabit another person, to take on the conditions of his or her existence? As such, it leads us toward compassion. Nor do I think that art complicit in suffering and violence—suffering and violence exist, they will always exist, and art can’t stop them. But it is possible to imagine that sometimes art can mitigate them.

Among the things that lie at the center of Great House, if one can speak of it has having a center, is the idea of doubt and inner struggle. Nadia doesn’t put writing on trial; she puts herself on trial. To state the obvious, just because one dedicates one’s life to art—which I believe, in its true form, always elevates us—doesn’t mean that one is free from remorse, moral failure, and scathing self-doubt. Very often the struggle to create exacerbates those things, because it requires such inner scrutiny. It’s in that exacerbated state, after twenty-five years of sacrificing everything for her art, that we find Nadia.

You were included last year in the New Yorker’s “20 under 40” series. Do you think of yourself as “young writer”? Do you think that it’s a meaningful distinction?

I don’t know; I don’t think much about it, really, except when readers ask me about writing in the voice of so many old men. Which I guess you could say I have a thing for, and then I have to admit that maybe I’m an old man at heart.