Edmund Wilson: Only a Critic 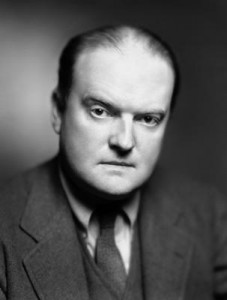 The works of Edmund Wilson aren’t much in vogue today. The New York Review of Books publishing house has re-issued a few volumes of his, but even New York’s largest Barnes and Noble turns up only a single Library of America edition of Wilson’s essays, and in every college library I’ve ever haunted, his fat, re-bound volumes of criticism and journals invariably huddle together on a shelf of their own, collecting dust and looking slightly ridiculous.

Wilson’s works may be ignored today in part because the very idea of a “man of letters” — a designation he could never escape — seems to many old-fashioned and tiresome, and in part because of a general scorn for professional critics, many of whom are now cultural and political propagandists with little interest in literature. But disdain for the “critic” as opposed to the “creator” is a good deal older than the culture wars; it would be interesting to map out a history of this disdain in various places at various times. I for one am reminded of the scene from A Movable Feast in which Hemingway recommends to a pretentious blowhard who “wants to write” that he take up criticism.

Wilson’s body of work by itself exposes the triteness of this prejudice. His great gift, which must be the greatest any critic can possess, is to impart to the reader a certain joy at having so many unread books waiting for him. This is not to say he neglects his duties to denounce trash. Wilson had read widely, had acquired through his reading a fine taste in literature, and was not shy about inflicting his tastes on his readers. One might be irritated or delighted by the frankness and mirth with which, in “Who Cares Who Killed Roger Ackroyd: A Second Report on Detective Fiction,” Wilson responds to a set of readers who wrote to him complaining about his distaste for mystery novels. He tallies their lists of proposed novels according to the degree of praise with which they have been recommended, reads the five or six most often recommended with highest praise, declares each one to be worthless and begs that these “mystery-fiends” bother him no more.

But Wilson never carries with him the bad odor of the pedant. His persona is that of the plain-spoken American, determined not to put on airs despite his erudition, and doubly determined to separate bad from good in the field of literature and right from wrong in the field of political and philosophical ideas. It is perhaps his belief that this task is possible and worthwhile that makes him seem to many cranky or old-fashioned. But in point of fact he is neither. He championed the experimental writers of his day, and he is at his most engaging when praising those whom he admires, as shown in his long essay on Edna St. Vincent Millay. It is as good an account of unrequited love as I have come across.

His group of connected essays Axel’s Castle also contains a great deal of praise — for Yeats, Joyce, Proust and others — mixed with a healthy amount of scorn (primarily reserved for late Gertrude Stein). This was Wilson’s first major work and it is perhaps his most prescient. Wilson traces the modernism of Eliot, Stein, Joyce, and Proust to its roots in French Symbolist poetry. This is to say that these later writers’ experiments developed from the Symbolists’ demands for each poem to require a “special language which will alone be capable of expressing [the poet’s] personality and feelings. Such a language must make use of symbols: what is so special, so fleeting and so vague cannot be conveyed by direct statement or description, but only by a succession of words, of images, which will suggest it to the reader.”

Today this might seem like a definition of poetry in general: we forget that there was a time when intentional obfuscation and metrical language did not necessarily come part and parcel. It is the fact that poetry has stuck so closely to the path Wilson has described that makes Axel’s Castle especially fascinating, as though he had written it with a crystal ball at his side. “Will the poets become more and more esoteric,” he asks here in 1931, “as the world becomes more and more difficult for them, diverging further and further from the methods and the language of popular literature in proportion as popular literature approximates more and more closely to journalism? Will the sciences dominate the future, as Pierre de Massot has suggested in a book which traces the development of Symbolism from Mallarmé to Dadaism, ‘smothering the last works of the past, until the day when literature, music and painting have become the three principal branches of neurology’?” To the first question we can offer only a resounding, rueful “yes.” It will probably be another generation or so until we can respond in the affirmative to the second, but the field of “evolutionary literary theory” and books like Proust Was a Neuroscientist have us halfway there.

Yet Wilson knew the history of literature well enough to know that the trail of literary trends does not resemble a line but a spiral, and futhermore it was not his manner to despair. It would indeed be hard to argue that any English-language poet since Wilson wrote his book has managed to successfully realign poetry with “the language of popular literature,” but then again the next great reformer of poetic language probably will not be cajoled by the critic to appear any more quickly anyway. Wilson is skeptical about the future of modernism, but he knows that the innovations he has been describing will bring artistic possibilities that even he, for all his perspicacity, cannot imagine. Thus he concludes his book on a plaintive but promising note in praise of the modernists. “And though we are aware in them,” he writes,” of things that are dying — the whole belle-lettristic tradition of Renaissance culture perhaps, compelled to specialize more and more, more and more driven in on itself, as industrialism and democratic educations have come to press it closer and closer — they none the less break down the walls of the present and wake us to the hope and exaltation of the untried, unsuspected possibilities of human thought and art.” One could say the same of Wilson, though the tradition of which he was a part turned out to be one of modernism’s casualties, and though even at the height of his powers he was only a critic.