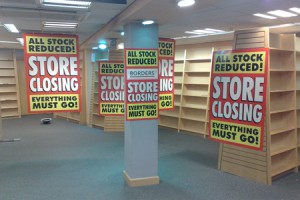 Borders, formerly known as Global-Hyper-Mega-Book, is liquidating, ending its 40 year run as “that other book chain,” i.e. the one that doesn’t own your college’s bookstore. The decision to shutter comes in the wake of a few seriously shitty years for the Ann Arbor-based business. Mike Wilson, the company’s president, released a statement that said what everyone was thinking: “Following the best efforts of all parties, we are saddened by this development, the headwinds we have been facing for quite some time, including the rapidly changing book industry, e-reader revolution, and turbulent economy, have brought us to where we are now.” Over at The Book Bench, the always sharp Ian Crouch parses Wilson’s statement:

Borders, of course, isn’t going to say that the book trade is fine and sound and that it simply blew it. Yet setting the “eReader revolution” alongside a “turbulent economy,” and branding it an “external force,” reveals a decade-long blind spot that goes some distance in explaining how Borders got to this point. It’s been said widely, but can stand repeating: e-readers and digital content are not part of some tidal force bent on destroying all that is fine and good about the written word. It is just another way for customers to buy books, for companies to sell them, and for people to read them. The recession has been tough on all booksellers (Barnes & Noble’s tight spot last year brought on many of the same reflections about the state of book retail) but the growth of digital reading has not been equally hard on everyone. Short of changing its name to Kindle, Amazon has done just about everything it can to promote its e-reader; Barnes & Noble has doggedly pushed the Nook. Borders, meanwhile, owned just over ten per cent of the Kobo e-reader, and gave the device prominent placement in its stores, but never managed to make a clear connection in customers’ minds. (B&N has since shored itself up enough that commentators were suggesting it as a likely tennant in many of the soon-to-be abandoned Borders locations.) The Detroit Free Press gets it right this morning by noting that the company lost “a battle with competitors, technology and itself.”

There’s been some crowing on Twitter and elsewhere about how this is a victory for independent bookstores, but it’s important to remember that 11,000 people are not only newly unemployed, but will now have to look for jobs when nobody is hiring. This is genuinely troubling, even if it does mean that the  independent bookstores that have survived the rise of big box stores and online retailers may see an increase in sales. (It’s also troubling for communities in which the only bookstore is a big box chain like Borders). It’s also important to remember that Borders’ decision to liquidate could seriously affect sales/distribution. Yesterday, Kathleen Schmidt explained the potential economic consequences via Twitter: “If you’re an author [with] a 1st print of 30k (a lot) …. you have B & N, Amazon, Borders, and indies. Now, take Borders OUT of that print equation. Also, consider that B & N is conservative with #s these days. That 30k turns into 15k.” Eek.

Finally, I  feel like I should issue an apology. Borders, I’m sort of a little bit sorry that I stole so many books from you when I was 19. You made it so easy! I could literally grab what I wanted and walk out of the store. I didn’t even have to put the books down my pants (or in a bag, for that matter!). I only stole books written by dead authors because I didn’t want to fuck with anybody’s royalties, even though I have no idea how any of that stuff works (“a man’s got to have a code”). I’ve since kicked the habit. Like Roberto Bolaño before me, many of the books I stole as a teenager are among my favorites now: Barthelme’s Sixty Stories, Borges’s Collected Fictions, Dostoyevsky’s Demons, Nabokov’s Pnin. Borders, I promise that whenever I read those books, the wind will whisper your name. Borders, Borders…