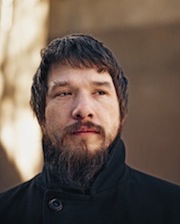 In Jesse Ball’s The Curfew, William and his daughter Molly solve riddles behind shuttered doors while the city outside is collapsing. The police and the revolutionaries are waging an undercover war, taking action against citizens at the faintest hint of suspicious activity. The Curfew is a quick and gripping read; touching, too, as father and daughter fight to preserve their quiet private life in a climate of indiscriminate violence.

Jesse Ball, who also authored the novels The Way Through Doors and Samedi the Deafness, spoke to Full Stop via email about The Curfew, Vin Diesel and the Queen of England.

Must a story have a villain? Does The Curfew?

Perhaps the state’s implacable hatred of the personal and the private. But then, what is “the state?” Ultimately, there’s just your life and what it touches.

Is The Curfew intended as a critique of police repression and surveillance culture?

I shouldn’t say what I intended. If I did it, I did. If not, not. I will say I wanted to write about a world I feel I know, or might know.

You’re known to write novels in a matter of weeks. How quickly was The Curfew written?

Why do you write so quickly?

I believe my best work is compelled to appear by a combination of rigor and deliberate passage. By deliberate passage, I mean writing the right thing the first time. Your life should present you with the words you need.  The writing process (for me) is not loose or messy. It must be sharp and clear.

I understand that you teach a course at the School of the Art Institute of Chicago on dreaming. What is the premise of this course? Is it an instruction course in dream analysis?

Oh dear, no!  I wouldn’t say what someone else’s dreams meant. Nor my own, if the truth be told. This is a course in lucid dreaming. I teach them, when it works, to become awake, to become conscious while dreaming. That’s the aim.

What’s so interesting to you about dreams?

Their privacy and scope; their consummate grasp of my life’s minutiae and their ability to gesture with those details.

Did you see Inception? What did you think of it?

It was beautifully, sumptuously done, however, I think it was an asinine decision to have the dream’s attempt to remove intruders manifest as soldiers, tanks, etc. It could have been anything. That displayed a serious poverty of imagining.  The ultimate effect was awful, too — someone coming into the theater halfway through wouldn’t be able to tell the difference between Inception and Fast and the Furious (which I also enjoy, but for other reasons (admirer of Vin Diesel’s work, esp. Pitch Black)).

There’s a rumor that you prepare to write a novel by sitting in silence for several weeks. True? Why?

No, no. Although my family does keep to itself, and that involves a fair piece of silence. I think this idea of the silence evolved out of my proposition that one can limit the amount of revision necessary in writing by establishing rigorous practices in reading and perceiving.

You’ve also published plenty of poetry. What are some of the key creative differences you observe between writing fiction and writing poetry?

Well, the main one is the audience. Also, the circumstances and style in which it will be read. The content ought to be largely the same:  the outpouring of what one knows and hopes.

You published a book of drawings in Iceland in 2006, Og svo kom nóttin, and your website features many drawings I assume were meant to correspond to The Curfew. What are some of the key creative differences you observe between drawing and writing?

People are less good (myself included) at drawing than at using language. Basically, everyone is extremely accomplished at using language. Even people who have difficulty using it are at worst, journeymen. However, when it comes to drawing, painting, etc, most people are complete beginners.  Actually, I’m not going to continue this thought. Better to just say:  my drawings have been praised by the Queen of England, yet she is unaware that I have written anything at all.

Who were some of your big influences in writing The Curfew? I’ll guess Kafka, Borges, and maybe Garcia Marquez…

Well, I’m fond of those guys. I’d say, though, perhaps Conrad is more of a novelistic influence than Marquez. Marquez is often sweeping, historical, etc.  I don’t know anything about that. Although, of course, the Marquez of Chronicle of a Death Foretold is squarely in my camp.

I read a few interviews in preparation for this one, and I was struck by how often you use the word “delight” in talking about your intentions as a writer. What is your definition of delight? What’s so important about it?

Passing joy of a sudden circumstance mixed with surprise. I shouldn’t say why it’s important.