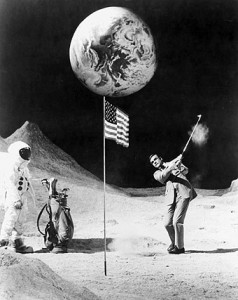 “For NASA, space is still a high priority” — Dan Quayle

The most complicated screen saver on my older model Toshiba is the image of a man wearing a space suit and jet pack floating around a space station. The angles flip, the sun hides behind Earth and then suddenly illuminates everything as our planet spins to face it. If it were any more complicated, it wouldn’t make sense to use it as a screen saver. And I love it. It would actually be embarrassing to admit how much I stare at it. Or when. Or what the circumstances are surrounding it. Let’s just say I’m interested in doing things in space.

People are asking the same questions that I am. And so I thought it might be worth it to briefly explore the limits of leisure activities in the most awesome place outside of space ship earth.

First, and I think the lamest, was when Alan Shepard played golf on the moon. This –white guys with buzz cuts exporting our most square and “establishment” sports to space — could be used as a metaphor for failure to take advantage of an awesome situation. “It’s like playing golf on the moon.” Some cooler sports might have been Zen archery, capture the flag, Moon’s strongest man competition, and gymnastics. Could you imagine the amazing floor routine Svetlana Boginskaya could have created unfettered by the earth’s gravity?

The Soviet’s policy of shooting animals into space wasn’t nearly as lame — though it was almost certainly immoral. Animals in space is a great idea in general, as long as a human goes along as well to play with them and take care of them. In fact, playing with a dog in space ranks pretty high on my list of activities I plan to participate in when I go to space. But shooting them into space in unpressurized cabins and thereby letting them die what I can only assume were painful deaths probably led the evil empire one step closer to its demise. R.I.P. Albina and Tsyganka.

Mary Roach is the author of incredibly interesting science laden books, the latest of which, Packing for Mars, explores everyday life for a human in space. It’s a pretty humorous way of exploring everyday activities like sex, going to the bathroom, grooming, and bathing in space. Although not spectacularly imaginative, these very basic tasks would have to be taken care of before the really awesome stuff could happen.

So going to space is a stoner, athlete, animal lover’s dream. And it makes one feel an affinity with Lance Bass, and a twinge of sorrow too, at his failed attempts to get to space. You have to wonder, does Lance have the same model of computer as me? Was he sitting around one day, stoned, playing with his dog, dreaming of doing it all in space? Because we humans are explorers, constantly pushing at the edges of our own existence, with vacuums inside of us larger than the universe itself. We saw a hill and we walked over it. We came to a mountain and we climbed We saw the ocean, so we crossed it. And so now, to be stoned in space, perhaps if not Man’s final frontier, is definitely a step in the right direction.