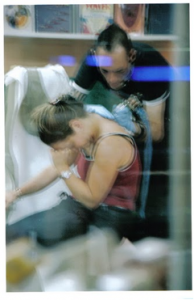 It’s good to read badly written stories. They remind me of a few things: a story isn’t the same as the text that tells it, what I think ‘bad’ means isn’t usually what others think it means, and what a well-written story means for me becomes clearer. I don’t think a bad story exists. Stories are stories. Like this story has a death row inmate recalling things from his difficult upbringing–poor farmers, whoring mothers, stolen pigs–as he waits for his time to go. The government is killing him just like he killed a man. That’s a good story. But the writing of it–the text–pushes me out in several places. Mostly it’s the ending, which more or less occurs as it would more or less occur on Death Row, but without a crucial element. This story about a broken life ends without a feeling brokenness and I’m left robbed of the empathy I could have felt for this character. The story could’ve been a window into another life but I couldn’t see through it. That would be a good story. And the fact that this story made me see that, in the end, makes it good.–Reviewed by David Backer

In “Burglary,” Carol slips into the neighbor’s house one night, Grinch-like, to rob the woman of “things she [Carol] wanted.” Complete with ski mask and a sack she stuffs to capacity, Carol makes off with the children’s pillows and stuffed animals, jewelry, nightgowns, pots and pans, a lasagna and even the neighbor’s husband. But there’s one thing she can’t take with her – it’s baked, nuked, right into the walls – and one thing she decides against, after she accidentally lets it out and it’s struck by a car. Jones’ pacing and clean, controlled prose allow little moments of poignant yearning to register, striking you faintly like the swinging beam of her flashlight, standing out from the room-to-room account of her heist like the oily stains her fingers leave on the neighbor’s photographs.–Reviewed by Ryan Nelson

Pete Risley is the unsung hero – or villain – in today’s horror fiction, and “In a Lonely Place” is as chilling as anything he has ever published. The story, like much of Risley’s work, has themes of paranoia, isolation, desperation and decay. Unlike past work on the Web, it is also far more intimate and gruesome. Starting off locked in a trunk, “In a Lonely Place,” Pete Risley keeps us imprisoned with the story’s tragic narrator all the way to a startling end.