Day of the Oprichnik – Vladimir Sorokin

Day of the Oprichnik, set in near-future Moscow, begins and ends with a dream: a dazzling white stallion, containing all life, destiny, and good fortune, recedes into the distance while the narrator, Komiaga, pursues it on foot. Komiaga is a member of His Majesty’s private army, the oprichniki, and between these dreams, he will rape, kill, and censor his fellow Russians. And thank God.

Komiaga is woken by whip cracks and moans — the ringtone on his mobilov — and after he finishes his hangover cocktail and morning prayers, his servant dresses him for the day. He wears a long cotton caftan over an outfit of gold, silver, velvet, and weasel. Like an original oprichnik, who served as an enforcer under Ivan the Terrible, Komiaga appears to be a monk. But unlike his predecessor, who rode a black horse and wore an emblem of a dog’s head and a broom — to sniff out and sweep away traitors — Komiaga rides in a crimson Mercedov with a floating roof and leather interior. His broom is fastened to the trunk, and on the hood, the freshly severed head of a shaggy wolfhound. “It’ll do,” thinks Komiaga, whose first order of business is the execution of a nobleman.

In a police state, it can be difficult to discern reality from propaganda, and Komiaga’s welling patriotism, which twice brings him to tears, often obscures the image further. His thoughts are littered with slogans and maxims, and his intimidating position makes genuine conversations with the public impossible. But his unconditional love for his great Orthodox nation — “Hail! Hail! Hail!” — also makes him guileless. At the airport, Komiaga is “invited” to the security corridor, where his “whole life appears in the pine-scented air.” His date of birth, home address, habits, prejudices, and the size of his limbs and organs are all there for the female screener to review. “And thank God,” Komiaga says. “We’re in our own homeland, nothing to be shy about.”

This blind transparency is underscored by Sorokin’s use of the present tense, which allows for moments of candid hypocrisy (as well as multiple instances of Komiaga attempting to narrate while having an orgasm). Over the course of the novel, Komiaga unwittingly reveals that his empire is merely a walled-off middleman between China, which is now manufacturing “all necessary goods,” and Europe, which is still putrefying. Russians drink Szechuan champagne and eat Shanghai caviar; they make Russian children on Chinese beds and do Russian business on Chinese toilets. Even the symbol of the oprichniki, the dreaded Mercedov, is made in China. But the ten-lane, two-story artery from China to Europe runs through the heart of Russia, and to make it to the end, one must have Russian insurance.

Like the Great Road, Sacred Rus’ is stretched to its limits, its faults and inconsistencies magnified. Smoking a post-coital cigarette on the porch while the rest of the men pull rank over a nobleman’s wife, Komiago reprimands his comrade, who cannot yet zip up his pants, for carrying a collection of Alexander Afanasyev’s bawdy folktales. “This obscene stuff is subversive,” says Komiaga without a bit of irony. “His Majesty can’t stand cusswords.”

Before becoming one of Russia’s most popular authors, Sorokin’s own bawdy tales were banned by the Soviets, and censorship comes up often in Oprichnik. One of Komiaga’s tasks for the day is to join several other government officials at the rehearsal of a holiday concert and approve it for the public. Most of the acts are traditional and require only minor changes. The Novgorodian warriors should have broader shoulders, they say about a piece highlighting the mercy of a young Ivan the Terrible, who would later establish the oprichniki and send them back to Novgorod for a massacre. “Pushkin should be younger,” an official says of another piece. But, in this case, the actor is a favorite of Her Highness. “Gentlemen,” pleads the long-haired director, “you must understand, it’s not up to me . . .” And they do.

There is one new act in the concert, however — a topical piece — and it requires serious vetting. In it, an anthropomorphic, European mole surfaces at the border and attempts to open the valve to a West-East gas pipeline. But just as he begins to turn the wheel, he is cut in two by a border guard’s ray-gun. The guard is then joined by two others, and together, they open the valve themselves and fart into the pipeline, eliciting screams and wails from the West. After the curtain, the representatives debate the act’s merit. Komiaga, as usual, worries about the element of obscenity, while an observer from the Secret Department complains about the mole being killed rather than being captured alive. A prince from the Inner Circle, however, “sees right to the bottom of things”:

“Tell me gentlemen, does hydrogen sulfide, which our valiant warriors fart — does it burn?”
The observer nods. “It burns.”
“Well, if it burns,” the prince continues, twisting his mustache, “then what does Europe have to fear from our farts?”

This earnest dedication to what they believe to be “good work” is at odds with the men’s absurd actions, and the tension between the two, a source of both humor and horror, builds to the novel’s graphic climax, in which Sorokin tests the bonds of brotherhood with a bath house ritual, euphemistically referred to as “the caterpillar,” that makes a blood oath seem like a friendship bracelet.

But Day of the Oprichnik is not concerned solely with the grotesque. Sorokin knows when to step back and remind the reader that his monster is a mutant, not an alien. Bickering between the right and left wings of the oprichniki, whose differences are as pronounced as those between your right and left hands, as well as a scene at a kiosk in which Komiaga notes that there are only two types of each product — to avoid “superfluous fuss and bother” — have clear analogues outside the empire’s walls. And despite the iron grip of theocracy, many drugs, including cocaine and marijuana, are legally available at every pharmacy — though the latter is available only after five o’clock. (Sorry, everyone who gets off work at 4:20.) And why wouldn’t they be? These substances “cause the state no harm,” Komiaga recites. “They do but help citizens in their labor and leisure.”

Komiaga is also no automaton — he could hardly be responsible for his actions if he were — and though he thanks God for His Majesty’s laws, there is one law that he does not hesitate to break. The law pertains to “aquariums,” illicit glass spheres filled with silver or, preferably, gold sterlets, and after Komiaga acquires one in exchange for a pardon, he and six other oprichniki rush to the bath house to enjoy it. Lying naked in a circle, they put the aquarium to their arms, and one by one, the tiny fish enter their veins, swim to their heads, and deposit caviar on their brains. This spawns a communal pleasure-dome of a high in which the seven men become the seven heads of a fire-spitting dragon, which immediately heads west, across the ocean, to lay waste to a certain godless land.

The atrocities of Sorokin’s dystopia are not sparked by futuristic weapons or surveillance devices, which are rarely mentioned: news bubbles do the same thing as newspapers; ray-guns do the same thing as Kalashnikovs. Nor do they stem from ignorance of the past: Komiaga was a history major when he was recruited, and his familiarity with Russia’s historical figures is often creepily intimate. No, the atrocities here are the result of good old-fashioned human nature, of our instinctual love of authority figures and the certainty we enjoy when acting according to ritual and ideology rather than reason. Komiaga dreams of a white stallion, of being a valiant, dragon-slaying bogatyr, but like the unchaste, half-blood princess for whom he fights, he is ultimately, tragically mixed. Sworn to defend his country from his countrymen, he is the knight and the dragon, the past and the present, Russia as it is and Russia as it is perceived by the rest of the world.

Komiaga’s courtly final task is to see a clairvoyant in Siberia on behalf of Her Highness. After he settles her scandalous affair, for which he will receive not a girdle or a ring but a token ten-ruble piece, Komiaga cannot help but ask the seer a question of his own:

“What will happen to Russia?”
She doesn’t answer, but looks at me carefully.
I wait with trepidation.
“It’ll be all right.” 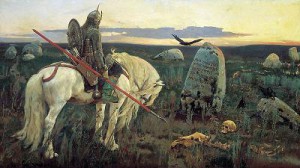