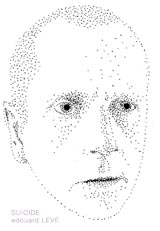 Edouard Levè committed suicide in 2007, just days before submitting the manuscript for Suicide to his publisher. I mention that because any acclaim for Suicide essentially rests on Levè’s own story. The back blurb mentions his self-inflicted death immediately, as if to designate the book as a suicide note. Even the passing mention of Suicide that precedes the excerpt of Levè’s Autoportrait in the March ’11 issue of Harper’s makes note of Levè’s fate. Suicide’s title is not very misleading: the book is about a suicide. On paper, it’s simple enough; an unnamed narrator gives a eulogy for a friend who killed himself, and delivers the eulogy to the friend (as in “Your death”). More so than anything in the text, the book’s eerie and deliberate resemblance to its author’s fate is its most striking feature. Though Levè’s prose is admirably succinct, even laconic, the fact that its merit comes mostly from without places a large asterisk next to the weight of his testimonial.

I’m not interested in hypotheticals, but I can’t help but wonder how this book would’ve been received had Levè not taken his own life. His musings on the Manichaean tug-of-war between life and death are far from earth-shattering, to say nothing of the collection of verses at the book’s tail end (“Rhythm leads me / Melody charms me / Harmony troubles me,” for example). Levè’s thoughts on suicide itself are nothing novel: suicide as control, suicide as power, suicide as an alternative to life, etc. Just as the unnamed protagonist’s death gives his own life meaning and coherence, so Levè’s death imbues his work with a weight that it would not have otherwise possessed. Of course, it would be perverse to suggest that Levè’s death was somehow either a ploy to sell books or a cry for attention, but the effect on the text is palpable and the reader is practically begged to read the novel through a glass darkly.

Levè skirts around the Suicide Note aspect (barely) by addressing the entire book to an unnamed, deceased “You.” The deceased here is merely an outline of a self, filled in with the stochastic details that make up a person. The details, though, are by turns both so vague and so intimate that the line between the narrator and the deceased is fuzzy at best. The narrator never talks about himself, except as a satellite of the deceased. He gives an account of someone preternaturally anhedonic and detached, someone who “confused sleep with wakefulness.” The details are precise enough that the second-person becomes paper thin, and Suicide takes on the tone of a person writing dissociatively about himself (“you heard words leave your mouth as if they belonged to someone else”). Along those lines, the book feels both like a suicide note and a eulogy. The distinction being that one is an explanation of death from the inside looking out, and the other is an explanation of a life from the outside looking in. In this case, though, the distinction is blurry because the deceased and the “I” narrator are barely distinguishable entities.

Eulogies and suicide notes (and, for that matter, suicides) are also one-off affairs, which is part of their appeal to Levè. And, predictably enough,it’s a sentiment he extends to making art in general. The deceased was an artist, a gifted painter, working in a medium that serves to capture and suspend a moment. He goes one step further in expressing contempt for any sort of repetition in life; “by dint of being repeated,” Levè writes, “the actions you saw lost their meaning.” Instead, the moments and works of art that mean something are ones that can’t repeat; they stay the same over time, their essences unchanged. There are plenty of reasons that go into the protagonist’s suicide, but the one that seems to win out is this chance at immortality.

While Levè is quite heavy handed in making that point, he takes care to make it ironically. Watching that kind of critical distance play out makes Suicide worth the read: if it were a tract about the meaninglessness of life and death’s romance, I’d dismiss the work as juvenile. “Painting depend[s] on this suspension of time in matter: the brief time of its realization is succeeded by the long life of the painting,” but the dead leave behind only an essence of what they once were (unless you want to get literal, and I don’t think now is the time). In a way, the protagonist’s suicide is framed a work of art. But though the protagonist’s putting a bullet through his brain and leaving an unnamed comic book open to a carefully chosen page is perhaps the defining image in Suicide, Levè is careful to undercut the notion that death turns life into frozen music.

Levè is nobody’s fool. The old dictum goes “you die young, you’ll live forever,” or some similar drivel, and Levè wants none of it. More so than the memory that death incites, Suicide is an exploration of forgetfulness and “memory’s caprices.” It’s a cruel irony, one that underscores the entire novel; that a defiant act meant to sharply etch a life into the minds eyes of the living ultimately does the opposite. No character gets a name, no character gets a face; only traces remain. “Memory, like photographs, freezes recollections,” Levè writes, but the memories here are really more like petrified footprints. Outlines remain, a couple details here and there, but in between there’s almost nothing except blank space. What we’re left with is a lament for the futility of both life and death. Though Levè’s sense of irony is intriguing, even prescient, Suicide’s lament mostly rings hollow, and would even more if it didn’t bear the weight of a dead man’s words.