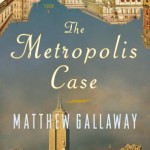 “Melody and dissonance. Do you know Tristan und Isolde? Richard Wagner?” These lines sum up Matthew Gallaway’s debut novel, The Metropolis Case. The novel’s “melody” develops in recurring and layering coincidences and connections, while its “dissonances” appear in sudden and unpredictable deaths which jar characters and reader alike. And, more obviously, “[m]elody and dissonance” describe Richard Wagner’s opera Tristan und Isolde, which binds Gallaway’s story and four main characters together across pages and centuries.

Lucien Marchand lives in nineteenth-century Paris and Vienna; he becomes the famous heldentenor who originates the role of Tristan in the 1865 Munich premiere of Tristan und Isolde. We follow Anna Prus from her 1960 debut as Isolde at the Metropolitan Opera through her career as a Julliard voice teacher. Anna discovers Maria Sheehan, adopted and growing up in Pittsburgh in the 1970s with no friends but immense vocal talent. Anna brings Maria to Julliard, and Maria eventually sings her own Isolde debut, this time at Bayreuth in 2002. Character number four is Martin Vallence, not a singer but a just-over-the-hill rock critic-turned-lawyer who retires after witnessing the crumbling of the Twin Towers on September 11th from his office window.

The last puzzle piece in Gallaway’s ambitious novel about music, life, and death pops up periodically throughout the 1970s-2000s New York City chapters – which comprise the bulk of the novel – is Leo Metropolis, a handsome and accomplished tenor known worldwide for his Tristan portrayal. Martin runs into Leo in the 1970s at a café after being floored by the latter’s performance in Tristan. Leo runs into Maria briefly when she is a Julliard student (1980), and their paths intersect again at Maria’s Isolde debut in Bayreuth (2002), where Leo miraculously appears to replace an injured Tristan. Leo and Anna Prus meet in slightly more interesting circumstances. In a novel riddled with coincidences and connections – some believable, some approaching the absurd – each character floats through his or her own sphere while occasionally brushing against someone else. Not surprisingly – though a slightly unbelievable twist occurs – everyone is brought together in the end.

Whether or not Gallaway purposely maintained a contemporary and consistent writing style, I could not help but wish that each character had a more unique voice. A great appeal of multi-narrative novels like this one is the distinct voice of each character. Take Rose Tremain’s historical novel, Music and Silence, or Milan Kundera’s The Joke, both of which trade the narrative among multiple voices, each written in a different style or from a different perspective. Gallaway’s constant third-person omniscient with a lamely shifting lens gets tiresome at times.

But despite a few flaws and unbelievable moments, The Metropolis Case offers an intriguing, Wagnerian take on music, love, yearning, sex, life, and death. While Gallaway rarely engages directly with Wagner’s music, he skillfully portrays the sense of longing “from constant exposure to a story of love and death” that “infect[s] everyone.” Gallaway’s characters – in and out of the opera – constantly desire something more, to remake and rebuild walls that have been knocked down, to accept tragedy and move on. And indeed, this is the heart of his story.