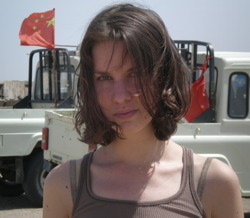 in conversation with Max Rivlin-Nadler

Leslie Jamison has an MFA from Iowa, is working on a PhD from Yale, and has published a sensitive and complicated novel called The Gin Closet. Her writing has appeared (or shortly will) in The Believer, Vice Magazine, A Public Space, and Black Warrior Review. The paperback version of The Gin Closet will be published in May. You can check out her blog at LeslieJamison.com

How similar are the characters in “Quiet Men,” one of your early stories, and the character of Stella in “The Gin Closet,” from yourself—all women in their twenties?

One thing I will say is that there are similar concerns that come up in a bunch of my characters. I’m interested in sex as an instrument of self-injury. Sex as something that we think we can gloss over as just being a bunch of jaded twenty-somethings who don’t let the world penetrate you too deeply. Being casual about sex, being casual about men, being casual about trauma — there’s a lot of pain embedded in that. So I keep using these young female narrators to try to get at that, and part of why I think I do that is because I am a young female in the world. In some sense there is a lot of autobiography going into how I think about those concepts.

But at the same time, I’m a bit weary of a lot of the preconceptions people bring to looking at young people’s work that may or may not be autobiographical. It can be seen as a failure of imagination or preoccupation with one’s self. I like to believe it’s something more than a failure of imagination. I like to believe that we’re all processing the materials of the world as they come to us and no matter what we’re writing about, what we’re processing is always going to become really manifest. The book I’m writing now has nothing to do with my personal life, but it has just as much of me in it as my other work.

Why separate “The Gin Closet” into two different perspectives, Tilly and Stella, with two different expectations for the outcome of their relationship?

It didn’t start out that that way. It was entirely from Stella’s perspective, and it was only until I realized I wasn’t accessing Tilly in the way that I wanted to that I cleaved the book. I was seeing everything through Stella’s eyes, which have their limitations. I kept on thinking of ways to get Tilly’s perspective into it, by maybe placing embedded documents in the text, diary entries, a letter, but I eventually decided I was being unjust to her and needed to let her voice take over.

When writing specifically about family, where fiction errs a little close to real life, how do you not leave too much of your personal life exposed?

Gender switching is a big help. You’d like to alienate the novel from your actual family, and the first draft of the book was much much closer to my family’s structure and experience than the later ones. It was almost like I needed to purge the reality from it in order to develop it further as a story. In a sense, trying to protect my family was a good exercise in getting to the imagined story that I actually wanted to tell. But I’ve spent ten years training them not to take everything I write too seriously.

I wanted to show by the end of the book that you need to move beyond some sense of obligation and begin to feel how your own life is being transformed by what’s happening when you take care of someone. That’s when you get rid of that sense of distance or pity, when you feel like everything you have is bound in this dynamic. That you’re not only giving care, but receiving something from that person. I think where Stella’s relationship to Tilly really changes is when Tilly becomes someone who is just in Stella’s daily life. Stella even begins struggling with the term alcoholic because Tilly is becoming something more than that. She’s a woman who says these really somber, difficult things, who takes a lot of baths, and they end up sharing a life together. Which makes Tilly more than just a set of categorical problems in Stella’s life.

Do you think the fact that twenty-somethings move around so much makes it hard to have these types of relationships?

I think that is such an important thing we take for granted—being an itinerant age group. There’s something free in that, but there’s definitely some pain. My characters go west as a sort of deformed version of all the early American novels, “go west my daughter,” and so forth, and what you end up finding is kind of the opposite of what you were looking for. One of the early titles of the novel was “This West,” where there’s a distinction between the west you imagined and the one you actually found. I lived in the Tenderloin part of San Francisco for a little while and it’s amazing what sorts of urban noise you can get acclimated to.

What’s it like to have a book out in the world, instead of a story that’s tucked away in a magazine?

It was really exciting but also I felt really exposed. There’s nothing to hide behind, you have to stand behind this volume that you want to offer to the world and there’s something really bracing in that. But it’s really an honor, it’s a gift that everyone who reads it will give the time to put some thought into my work.

I’ve been working on a new novel for a while. I’m about 100 pages into Infinite Jest. So that should take up a pretty large chunk of the new year.